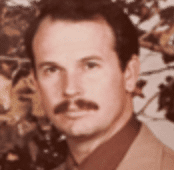 Young was a deputy sheriff in Coconino County, Arizona. He and two other law officers were attempting to arrest Ralph Ross Mann, 43, of Fredonia, on a warrant.

As he walked down a hallway in a trailer belonging to the suspect’s mother-in-law, Mann jumped out of a side room and opened fire. The opponents emptied their revolvers at each other, and both were killed.