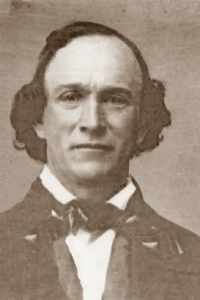 Edwin Dilworth Woolley, Senior, the son of john woolley and rachel dilworth was born at West Chester, Chester County, Pennsylvania June 28, 1807.  His father was a well-to-do farmer and Edwin was planning to be a farmer.  He usually worked on the farm during the summer and attended school in the winter.  He acquired a good common school education and applied the knowledge he acquired usefully.

His mother died in 1826 and his father in 1832, leaving seven children.  Edwin, the oldest, assumed responsibility for the family.  Although the youngest child was only seven years old, Edwin performed the part of father, until they could care for themselves.

In 1833 Edwin moved to East Rochester, Columbiana County, Ohio.  Before moving, he began courting Mary Wickersham, but May’s family moved, causing a separation.  Their courtship was carried on by letter until Edwin moved over the Allegheny Mountains to East Rochester, where he was married to Mary on 24 March 1831.  The newly weds settled in the neighborhood where his wife’s parents resided.

While at East Rochester, Edwin heard of the prophet Joseph, who was living about 90 miles away in Kirtland. In 1837 Edwin visited Kirtland hoping to see and converse with Joseph, but because the Prophet was away, he met only joseph smith, Sr. the Church Patriarch known as “Father Smith.”  Edwin invited Father Smith to his home and he lived with Edwin’s family during the winter of 1837-38, during which time Edwin received instruction in the Gospel.

On 24 December 1837, Edwin was baptized and confirmed by Elder Lorenzo D. Barnes.  He was ordained a High Priest the following day and set apart to preside over the east rochester branch.  In 1839 Edwin moved to Quincy, Illinois where he first met Joseph and Hyrum Smith and a close friendship was developed.

In the spring of 1840, Joseph advised Edwin to move to Commerce, soon named Nauvoo. That fall, Edwin left on a mission to Pennsylvania, where he served for a year, converting and baptizing a considerable number of people.

During this mission he served without purse or script.  While walking one day, he came to a toll gate at Strasburg, Lancaster County, Pennsylvania.  It was customary to allow ministers or preachers to pass through free of charge. Brother Woolley said he was a preacher, and was allowed to pass free.  He had gone about three miles further when he heard the clatter of horses’ hoofs on the road.  Turning, he saw two horsemen riding at a hard gallop.  They soon overtook him and one of them said, “You are no d___ preacher and you will have to go back with us and pay your fare and a fine.”  Elder Woolley said that if they would produce a hall and furnish an audience, he would show them he was a preacher.

A hall was provided and a notice of the meeting went out.  A large congregation gathered, attracted by the novel situation.  Edwin must have had the assistance of the Lord as the men who arrested him, and the congregation, were convinced he was a preacher and released him without having to pay the toll or the fine.   Edwin was so satisfied with the reception at the meeting that he remained there for some time preaching and making conversions.

On his return to Nauvoo, he engaged in a mercantile business.  While thus engaged, the Prophet called on him and said, “Brother Woolley, we want all of your goods for the building up of the Kingdom of God.”  Elder Woolley at once packed up ready to move all the goods in his store except for some which were held on commission from different mercantile firms.  He then said, “Brother Joseph, I wish to know if you also want the goods I hold on commission and will pay the houses in St. Louis and other places from where I obtained them; and also whether you will sent a team to take the goods away or if you wish me to deliver them.”  The Prophet answered, “And you have packed all your goods except those you hold on commission and are ready to deliver them….” “Yes,” was the answer. “Then, said the Prophet, “take our goods, replace them on your shelves and go on with your business.”  Edwin passed the test proving he would make any sacrifice necessary for the Gospel sake.  At various times, Edwin did furnish the Prophet with money both as loans or gifts.

In 1842 Edwin served a mission to Massachusetts and Connecticut. When he returned in 1843, Hyrum Smith read him a copy of the revelation (D&C 132) on Celestial marriage.  Edwin became one of the first to take up the practice of plural marriage as he married two plural wives.

Edwin witnessed the Prophet and Hyrum render themselves to the officers to be taken to Carthage in June 1844. Following the death of Joseph and Hyrum, Edwin suffered with other Saints persecutions and finally left Nauvoo June 5, 1846 to move with his wives, Mary Wickersham and ellen wilding, (louisa gordon had died and was buried in Nauvoo), and seven children to winter quarters.

In September 1846 Edwin was called to go east to transact Church business. Upon his return he prepared for the journey to Utah.  He fitted four wagons with teams and supplies and crossed the plains to Utah in President Brigham Young’s Company, arriving in the Valley September 20, 1848.

In the fall of 1849, he was called by President Young to assist Bishop Edward Hunter with emigration and purchase of goods for the Church. He returned to Salt Lake in the fall and on 10 November 1850 he married a fourth wife, Mary Ann Olpin   He subsequently had two additional wives sealed to him.

Edwin was elected to the House of Representatives of the first legislative assembly of Utah Territory.  In 1853 after taking a herd of Church cattle to California for sale, Edwin was ordained Bishop of the Salt Lake Thirteenth Ward where he served until his death on 14 October 1881.  In addition, Edwin was a high counselor in the first high council in Utah, was an incorporator of the Deseret Telegraph Company and he served several terms as Salt Lake County Recorder.

Bishop Woolley had a sincere testimony in the divinity of the mission of the Prophet Joseph Smith and revered his memory.  At the time of his death he was the father of 26 children, 152 grandchildren and 156 great grandchildren for a total of 334 descendants.