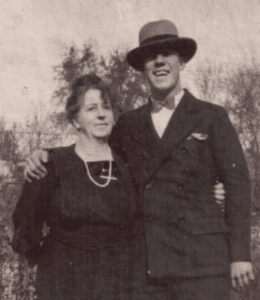 Arthur “Art” Wiscomb, 83, died August 23, 1990 at a local hospital. Born September 27, 1906 in Salt Lake City, Utah to Walter Charles and Thora Petersen Wiscomb. Married Sarah L. Irvine, August 13, 1926 in the Salt Lake LDS Temple.In his early years he worked for the Union Pacific RR, then for many years was the Purchasing Agent for Salt Lake County. He then became Auditor in the Welfare Department for the State of Utah. He was an active member of the East Mill Creek Lion’s Club, and was a past president and Life Member of the East Mill Creek/Old Mill Chapter of the Sons of the Utah pioneers, active High Priest in the LDS Church and held many positions over the years. He is survived by 1 daughter, 2 sons, 24 grandchildren, 31 great grandchildren and 2 sisters. Preceded in death by 1 daughter, 1 granddaughter, 1 sister and 2 brothers.

A History of Sons of Utah Pioneers Conflict, Tragedy and Peace: The Utah War

Guardians of the Pioneer Heritage