Part way up Sardine canyon, between Brigham City and Logan, is the tiny town of Mantua (pronounced Man-a-way). The name means Little Valley, according to a plaque in front of the Mantua city hall. The name came to Utah from Mantua, in northeastern Ohio, which was President Lorenzo Snow’s birthplace. Mantua, Ohio, was named after the Italian city of Mantua in honor of Napoleon, who had captured Mantua in early 1797 at the end of the Siege of Mantua (Wikipedia). 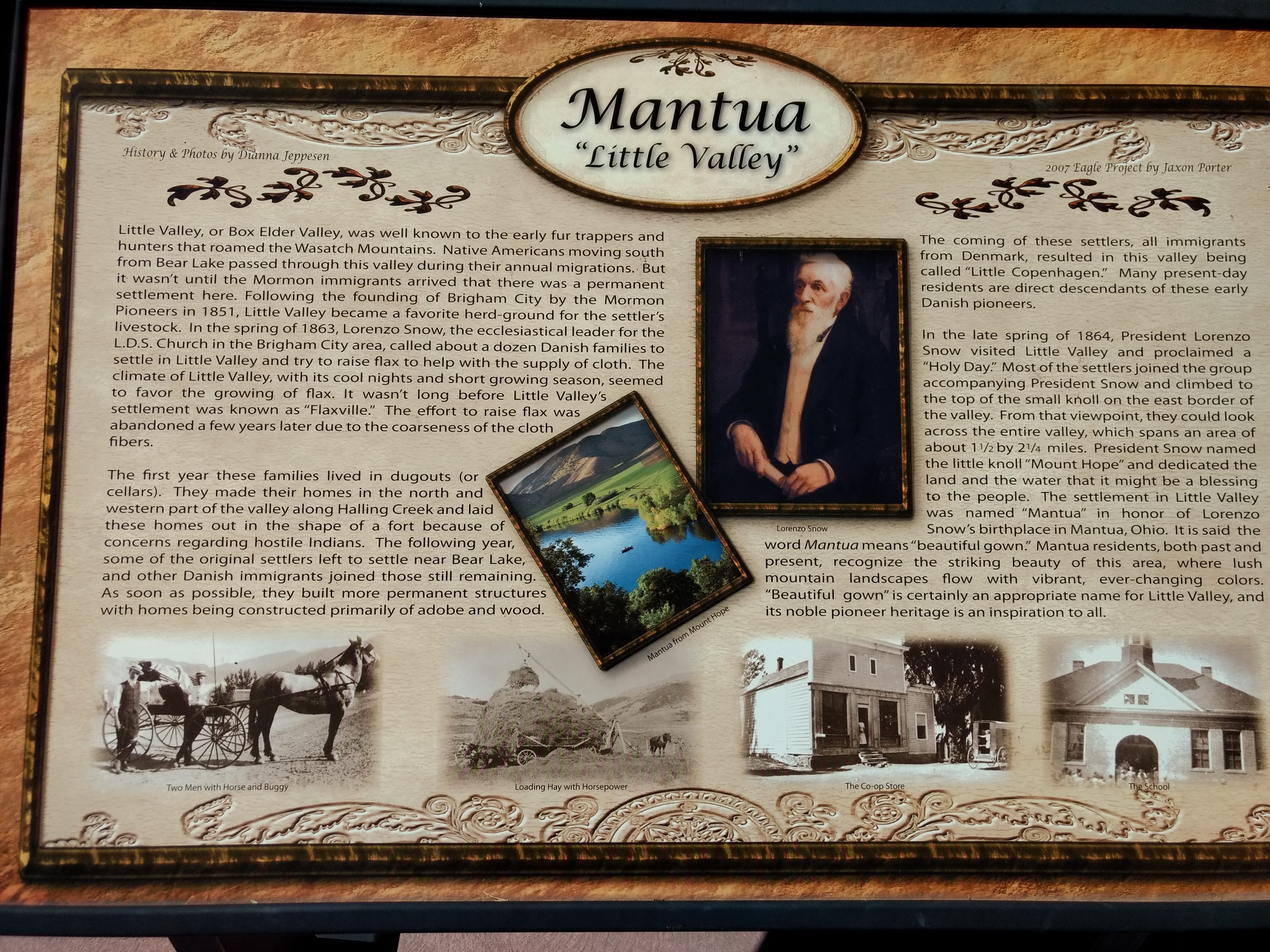 Also in front of the Mantua city hall, is a plaque honoring Samuel Alonzo Whitney, Sr., my great, great, great grandfather, who carried the mail as he rode the pony express between Brigham City and Logan, Utah in 1859-1860. Eventually known as Peg Leg Sam, he was known by the local Indians as “Burowitz,” the one armed boy. Sam was a self-taught linguist who could greet native Indians as well as immigrants from various lands and languages in their own tongue.

One day a young man came over the mountain carrying mail. He was on horseback and only had one arm. His name was Samuel Along Whitney (Sr.). There were Indian vs. Settler conflicts at the time. But the Native Americans recognized him a long way off because of his “missing arm.” They knew he was a friend and could speak their language fluently. They called him, “Burrowitz” a Shoshone word meaning, “one arm gone.” They often rode along with him so he could always get the mail through. Sam A. Whitney is credited with carrying the very first mail from Logan to Brigham City. When he visited with the settlers he spoke with them in their own immigrant languages. They said he had the “gift of tongues.”

As soon as the first colonizers arrived in Cache Valley, in July 1856, [they] located Maughan’s Fort, later named Wellsville. Messages or letters were carried by outgoing and incoming settlers and travelers. Mrs. Peter Maughan, among the first group of settlers, sent letters by outgoing travelers going south and asked them to enquire at each settlement until they found the persons to whom the letters were addressed.

During the early settlement of Logan in the spring of 1859, John F. Wright and Ed Nelson, two young husky lads, delivered messages and letters between Logan and Maughan’s Fort and the other early settlements. These young men almost lived in the saddle during that year, delivering messages.

The first official mail route into and out of Cache Valley was established in 1860 when Pres. Brigham Young called Samuel Whitney to carry the mail. This work was considered a mission and Mr. Whitney did not receive any pay other than a little flour, bacon and other produce from the Tithing Office at Logan. Mr. Whitney provided himself with a horse, saddle and mail pouch and carried the mail at points between Logan and Brigham City.
His route was as follows: He would leave Logan on a Monday morning and call at Providence, Millville, Hyrum, Wellsville and Mendon and go to Brigham City by way of the summit. He rested a day in Brigham City and returned by the same route. The next time he would leave Logan, call at Providence, Millville Hyrum and Paradise and then go west of Paradise over an Indian trail into Hunsaker valley, now known as Mantua, and on to Brigham City. He would rest a day and return the same route. This gave the valley a semi-weekly mail service.

Smithfield and Richmond were the only towns north of Logan. Hyde Park was settled that year. The same was true with Millville, Hyrum, Paradise and Franklin. The mail from Richmond and Smithfield and what little there was at Hyde Park, was brought to Logan. They also received their mail at Logan, delivered from the south by Mr. Whitney. The mail was carried in this manner for one year. [Thereafter it was contracted with paid carriers.] http://library.loganutah.org/local/history/hoveybook.pdf p. 143

In 1862, Samuel moved to Cache Valley where he was called to herd the church cattle. Here he made many friendly contacts with the Indians, whom he learned to trust. Samuel learned to speak the Indian language.
When he was 14 years old, he had lost his left arm in a threshing machine accident. The Indians named him “Burrowit,” which means “One Arm Gone.”

At one time, Chief Washakie came to Logan to confer with Bishop Whitney. The government interpreter was called to talk with the great chief. After a few moments of conversation, Washakie asked for Burrowit to come to Logan. He said, “I’ll wait to talk to Burrowit. He speaks good Indian. I don’t understand this man.”

Samuel had the misfortune to have his right leg amputated when he was 50 years old. His leg was crushed in a canyon accident. His wife, Fanny, would not consent to an amputation. But, infection set in again and again until he did lose his leg above the knee.

Chief John, a Mormon convert from the Sioux tribe who came to visit the Whitney home often, was a firm believer in prayer and had implicit faith that God would heal the sick. During Samuel’s severe illness, Old Chief John spent hours in the Whitney home, attending to his friend and offering a continuous prayer to God that Burrowit would live. https://www.familysearch.org/tree/person/memories/LKVY-5G3

[In 1841] Alonzo was partial to the Methodist Church, while Henrietta was affiliated with the Presbyterians and each attended his [or her] own church. Then one day Alonzo’s uncle called on them and told them he was a missionary for the Mormon Church. “Uncle,” said Alonzo, you are welcome to stay with us as you wish, providing you don’t preach Mormonism to me.” This was agreed upon, and Uncle said nothing about religion.

But, Alonzo’s curiosity got the better of him, and he asked questions which his uncle cheerfully answered. Uncle, as no doubt most Mormon Elders do, made himself useful around the home, and it was his habit to make fires in the morning. One morning while thus engaged, Alonzo came rushing from his bedroom and exclaimed,

“Uncle, I’m a Mormon! Come and baptize me at once!”

“Shall we wait until after breakfast?”

So, they went to the river and Alonzo was baptized. On returning to his wife, Henrietta, he said, “Now I’m a Mormon. I’ll go to my church and you may still go to yours.” But, Henrietta soon followed her young husband into the waters of baptism, and both remained faithful unto their deaths.
https://www.familysearch.org/tree/person/memories/KWBB-NBD

1843 Samuel’s parents performed baptisms for deceased ancestors at Nauvoo in the Mississippi River. Alonzo served two short missions with his “uncle,” Charles C. Rich. In February of 1945, before Sam was 5 years old, his father, Alonzo Wells Newcomb Whitney, had died of typhus fever in Nauvoo.

On September 17, 1845, the mob succeeded in their purpose; and although Samuel was a lad of only five years of age, he remembers so well, every detail of that dreadful journey. How they were driven straight down the street on which they lived to the Mississippi River. How they carried only a few of their possessions with them. How they could look back and see even the doors standing open…. He related the story of the sickness and starvation of the people, when there came an enormous flock of quail, which were so tame that the women and children could pick them up anywhere…. Although he spoke often of his Nauvoo home and … of the sad parting, he never mentioned childhood playmates or his life before leaving Nauvoo. (familysearch)

Sam’s younger brother, Don Carlos Whitney, died four days after arriving at Council Bluffs. During the winter of 1846, in Winter Quarters, Henrietta was married to Newel K. Whitney, who became the second Presiding Bishop of the Church. He furnished “a good team of oxen and a wagon, with a driver to take her to Salt Lake City with her remaining son, Samuel.” They arrived September 29, 1847, in the Second Company, led by John Taylor or A.C. Smoot.

Newel K. Whitney was almost fifty years old when he entered plural marriage. He subsequently married Olive M. Bishop in 1844; Emmeline B. Woodworth Harris, Almira Elizabeth Pond, Abigail A. Pond, Elizabeth M. More, and Henrietta Keyes Whitney in 1845; and Ann Houston in 1846, then Emmeline B. Wells. He died in 1850 [after helping so many reach the Salt Lake Valley].

After his death Henrietta married Stephen Hales of Kaysville, a former stone cutter on the Nauvoo temple. They had four children together. She outlived him, as well, and died “at the ripe old age of 80 years.”

In the Millville cemetery, south of Logan in Cache Valley Utah where Samuel Whitney Sr. was buried in 1923, I have four sets of pioneer ancestors buried: Chandler, Hovey, Hulse, and Whitney.