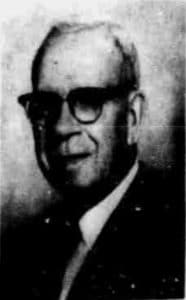 Dr. Jesse Johnson Weight, 78, member of the Brigham Young Chapter, Sons of the Utah pioneers of Provo, died May 20, 1970 in a Provo hospital of cancer. His funeral was held May 23 in the University Ward Chapel, Provo, and burial was in the Springville Evergreen Cemetery.

A graduate of Brigham Young University, class of 1916, he went on to receive his masters degree in bacteriology at the University of Chicago in 1924. He attended the University of Utah College of Medicine in 1929 and received his M.D. degree at Rush Medical College in 1931.

He was a veteran of World War I, serving with the Army. A member of The Church of Jesus Christ of Latter-day Saints, he was a high priest and served as president of the YMMIA for several years.

Dr. Weight was born in Springville, April 25, 1892, a son of Henry Joseph and Rheuama Johnson Weight. He married Thelma Eggertsen, May 25, 1923, in the Salt Lake LDS Temple.