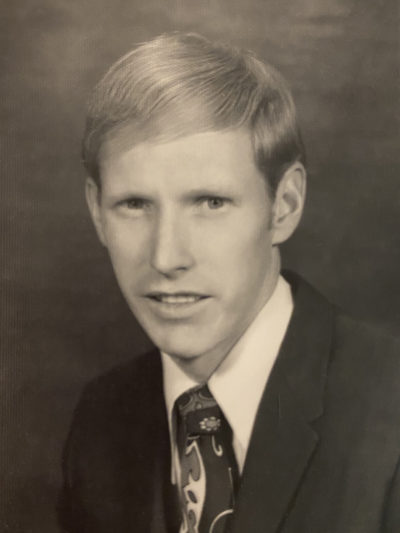 Paul Kenneth Weaver, 74, a member of the cotton mission chapter, passed away peacefully June 25, 2020, due to Parkinson’s disease. He was born Nov. 15, 1945, in Salt Lake City, Utah to Kenneth Conray Weaver and Bertha Weaver.

Paul, a USA Veteran, was drafted and served in the Army where he met the love of his life who was also serving at that time. Graduate of Brigham Young University in microbiology, Paul worked at Dixie Regional Medical Center for 30 years as a microbiologist.

Having moved to St. George in his youth, Paul was raised with the red dirt of Southern Utah flowing through his veins. If you had ever seen one of his slide shows, you knew the joy he had in exploring the surrounding mountains and canyons.

Paul loved his topo maps and used them to find adventure. Although he would never publish his accomplishments, it was likely that he was the first to explore many canyons and unknown locations in Zion National Park and the nearby area. Paul knew the canyons like the back of his hand, and if there was ever a dream job that he would have left us all for it would have been to be the backcountry manager in Zion.

Later in his life, Paul became passionate about Southern Utah archeology and made it his personal mission to research the temple trails of St. George and related sawmills.

Paul Kenneth Weaver was born November 15th, 1945 in Salt Lake City, Utah to Kenneth Conray Weaver and Bertha Borquist Musser Weaver.   He was born at the Holy Cross Hospital and in his journal writings he said “It’s a boy” were the first words that greeted his ears.

My dad was born with two older half brother’s, Dick and Bob, and two years later his younger brother Stan was born.

The family moved to Provo when my dad was four and then moved to St George when he was eight due to my grandpa’s banking job.  There the family bought property on Diagonal St and built their family home.

My dad would tell me stories of not having air conditioning in the early Dixie days and going swimming at the local pool to cool off. My dad and his brother, Stan, also spent their time playing on the red hill behind their house and my dad developed an interest in the outdoors.  He participated in the scouting program and said that “things came naturally” for him in scouts.  My dad spent plenty of time in Pine Valley both through scouts and also his father, Kenneth, who would rent a house up there for the summer.  The family would also spend time at Moon Lake in the Uintas and the Redwoods in California.

My dad was in the last class that came out of the Woodward buildings that were Dixie High and Dixie College combined.  He played the clarinet in band and also played tennis which he loved. When I asked what his best subject was in school he said he was “better at tennis than anything.”

He was called to serve in the north Argentine mission where he learned to speak spanish and served under Richard G Scott, his mission president.  He came to know Richard G Scott well and there was a mutual respect between the two.

Upon returning to the United States he continued his education at BYU.  After graduating with his bachelors he was drafted into the US Army during the Vietnam war. While training at Fort Sam-Houston in San Antonio, Texas he met the love of his life, Bonnie Rae Needles (who by the way, outranked him).  She was the only LDS member serving who had a car and Paul was lucky enough to get a ride from her.  A ride that would last 47 years.

My parents were married in the St. George temple on November 5th, 1971.  When my mom was discharged, she joined my dad at Fort Leonard Wood where he was stationed.  When he, himself, was discharged they returned to BYU where he completed a master’s in microbiology.

They then moved back to his red-sand love, St George. He obtained a job at Dixie Hospital and dedicated 30 years of his life to the lab there.  Most of us kids have memories in his microbiology lab where he would help us with prize-winning science projects.  Most kids did not have access to petri dishes, centrifuges, and microscopes so we had the upper hand.  Take-your-daughter-to-work days were my favorite and steered me in the direction of the career I have now.

While I was in school, I did some of my medical rotations down here at Dixie Regional Medical Center.  I specifically remember while in rounds with the neonatal intensive care team, the attending discovered my dad was Paul Weaver and stopped the rounds to tell me how smart and impressive he thought my dad was.  My dad was well respected in the medical community.  He was very intelligent, logical, and scientifically minded.  Along with this he was very persistent which made for an annoyed teenager when he would help me with my homework. If we couldn’t solve a math problem, I would eventually give up and resign to lose those few points on the assignment, which would make no difference to my overall grade.  Hours later my dad would come find me, after pulling out his own college books and working on it himself, to show me how he had solved the problem, whether I was interested or not.  My dad had a love of learning and a curious nature unlike anyone I have ever met.

In 1978 my parents bought property in Bloomington Ranches and built their family home with their own hands.  People asked my dad if he had experience building and he would tell them no, but if he could nail one nail he could nail two.   He was never afraid to take on a project and teach himself as he went along.  He would also fix his Jeep pickup and eventually rebuilt the entire Kolob cabin, all with his own self-learned skill.

My parents had us four children around that time; Christian, Matthew, Phillip, and me, Paula. I was lucky enough to be named after him.

As children we grew up visiting the national parks of Utah, especially Zion as we came up here to Kolob frequently and it became a sort of second home.  My dad taught us to rappel at the youngest age possible and we hiked constantly.  We took a family backpacking trip up to the top of Pine Valley Mountain which was no small feat with a young family of 6.  My dad also had a tradition we called “the 9-year-old-hike.” He would take us on our first overnight backpacking trip, down the West Rim Trail, when we turned nine.  Just the 9-year-old and dad, eating Beanee Weenees out of the can and sleeping under the stars.

My dad loved Southern Utah.  If you had ever seen one of his slide shows, you knew the joy he had in exploring the surrounding mountains and canyons.  He loved his topo maps and used them to find adventure. Although he would never publish his accomplishments, it was likely that he was the first to explore many canyons and unknown locations in Zion National Park and the nearby area. My dad knew the canyons like the back of his hand and if there was ever a dream job that he would have left us all for it would have been to be the backcountry manager in Zion.

Later in his life, my dad became passionate about Southern Utah archeology and made it his personal mission to research the temple trails of St. George and related sawmills.  Much of his later life was spent in his office compiling all the information he could on the Mount Trumbull sawmills.  We hope this will be used for the more official history in the future.

He also had a deep love for the Boy Scouts of America. As mentioned earlier, he was drawn to this at an early age and this draw only grew stronger with time.  He was the Scout Master in our ward for many years and led several 50 milers through the backcountry of Zion.  As I think about the Scout Law, “A scout is trustworthy, loyal, helpful, friendly, courteous, kind, obedient, cheerful, thrifty, brave, clean, and reverent,” he was each one of these things and embodied the ideal scout.  He was so dedicated to the Scouts that in the confusion of his final year of life, he kept telling our mom he was called back to scouting and needed to “save the Scouting program.”

My dad had an even deeper love for the Church of Jesus Christ of Latter-Day Saints.  He committed much of his life to service, not only through his mission in Argentina and his leadership in Scouts, but through every calling he was given.  In the last few months he would dress for church regularly, sometimes on a Sunday but also on a Saturday or a Tuesday . . . or any other day because of his confusion.  It was heartbreaking to tell him that there was no physical church meeting because of coronavirus.  He was so dedicated to going weekly, taking the sacrament, and serving others.

My dad was not a man of many words and as kids we connected with him mostly through projects and hikes.   However, he was not just a stoic man.  He was always friendly and cheerful with a great sense of humor, and on the other side of that, would shed tears while bearing his testimony to us kids later in life.  I do not recall a time when my dad showed excessive anger.   In fact, he seemed to enjoy the trouble some of us kids got into as teenagers.  There was the time that Phillip was detained by the police for water ballooning the fans in line for the Star Wars movie.  While my mom let Phillip have it, my dad was making jokes that Phillip should have added soap to the water balloons to help the fans take a bath as they had been in line for days and probably needed a shower.  There was also the time Phillip and his friends set off homemade firecrackers with shotgun BBs on New Years. They were again detained by the police but the truth was my dad had helped them make the very firecracker bombs that got them in trouble.

From our dad we inherited our love of outdoor adventure, our work ethic, our willingness to take on difficult projects, and our basal cell carcinoma.  With the exception of the last one, we will forever be grateful for his influence and even the slow growing skin lesions have become a badge of honor as children of Paul Weaver.

As I said previously, I was named after my dad.  I can’t think of a name I am more proud to have.  I only hope I can live up to the legacy he left.