by James B. Allen, BYU professor of history emeritus 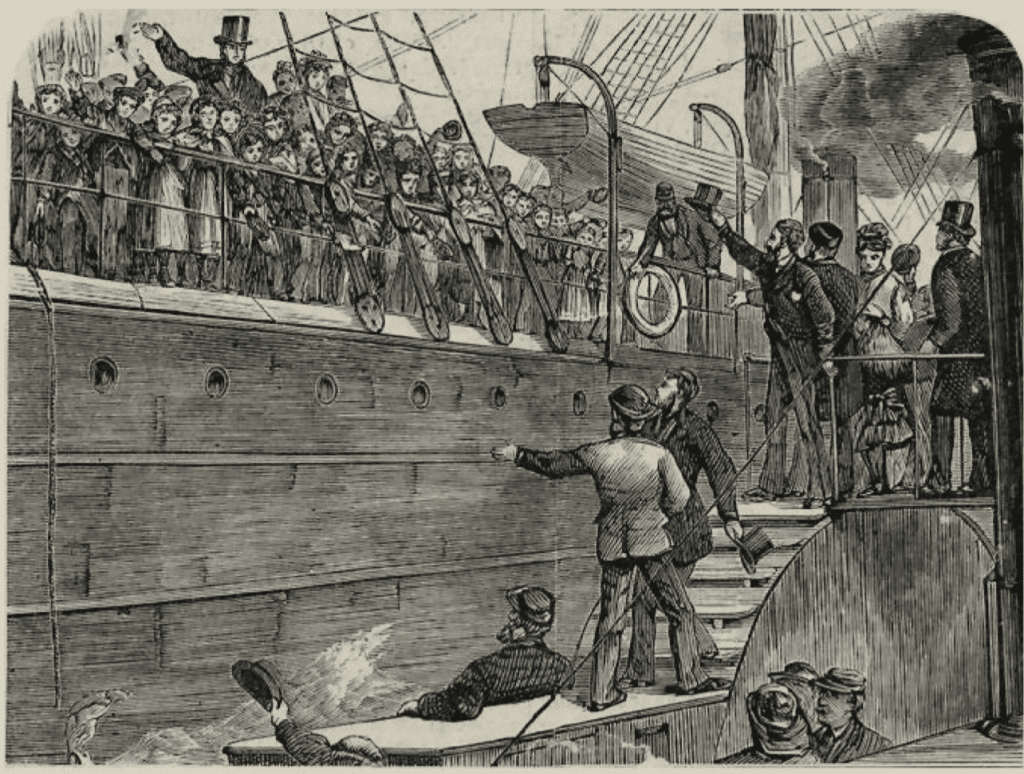 By 1840 the spirit of gathering to America was beginning to excite the British Saints. Even though the official call to gather did not come from Church headquarters until that August, many British Saints had anticipated it and were ready to go. Mission leaders were concerned, however, thinking that perhaps the emigration was premature, but on April 15 they finally decided to allow it.

A number of Saints decided to go on their own, without waiting for organized companies. Others organized themselves into companies, even before the Church emigration agency was established. The first of these self-organized companies, some forty-one Saints, left Liverpool on 6 June 1840, under the leadership of John Moon. The letter which follows is John Moon’s account of that voyage written to William Clayton, and is, so far as we know, the earliest document available telling the story of a transAtlantic voyage of Mormon emigrants.

The letter is included in a letter William Clayton wrote on 19 August 1840 to Brigham Young and Willard Richards, who were fulfilling an important mission in England. Clayton had recently been released from the British Mission presidency and was preparing for his own emigration.

Moon was a cousin of Clayton’s wife and wrote to Clayton from New York. Clayton . . . used the bulk of his letter to reproduce John Moon’s report.

“New York July 22-  I feel glad to find my feet upon the Land of Joseph after so loud and tedious a journey; we have had a very long voyage but quite as short as any ship on the sea at the same time. Many ships which sailed before us was not come in when we was set at liberty, the captain said we had a very hard voyage for the season.

“Started from Liverpool on the 6th of June good wind 6 hours and then a calm 4 sick in the company on the 7th on Sabbath we had a rough wind. On the 8th was had a very high wind and water came over the bulwarks all that day and all was sick. I never saw such a day in all my days. Some crying, some vomiting; pots, pans, tins and boxes walking in all directions; the ship heaving the sea roaring and we passed that day.

“On the 9th a calm. 10 good wind all day—company rather better; they all came upon Deck. Sister Hannah, Dorothy, Lydia and Alice was very sick. . . . Old Henry was not sea sick at all—was poorly. . . .

“On the 11th not much wind. July 6 the scene has been very different, since the 11th of June then all our family was recovering but alas since that time we have had the bowel complaint among us and all the company has had it. . . . Sister Hannah has had it all the way. It is the most dreadful complaint that has come to us. We was all sick at once and what made things worse I had the ill luck to scald my foot in boiling broth.

“With regard to ship and convenience it has been bad and I would say to all who may come here keep from Britannia if you want peace. Come on a packet ship if you give rather more [He then speaks of provisions recommends to make our own bread and not buy biscuits.] . . .

“I got up very early on friday morning July 17th saw land at 4 o’clock. Tacked off until 2 in the afternoon when we saw land again. At 5 saw Long Island all covered with green trees and white houses such a beautiful sight I never saw. I did rejoice to behold the land of Joseph: yea, I thought it did pay for all the hardships which I had gone through.

“Quarantine 3 days. If you could come sometime from September to May you would not need. I got permission from the Captain to go to New York on the Sabbath arrived about 1 o’clock RM. It was with much trouble I found the saints. … I told them who I was. . . . Their hearts was filled with joy and their eyes with tears. They received us with all the care possible.

“All the company got in on Monday the 20th of July. We have had much affliction tis true more than I can describe but after all I do not know that I ever heard one word of murmuring in all our afflictions. We have all got over safe and in a state of tolerable health. I feel glad that we have got so far on our journey. I feel somewhat sorry for all those who have to come after us but keep up your day is so shall your strength be. ‘You must expect great tribulation in the way to Zion for those who John saw had come through much tribulation and I do not know any way but one that leads to the kingdom of God. But I can say with truth that if things had been 10 times worse than was I would just have gone right ahead through all. We had 3 storms but the Prophecy of Er Kimball was fulfilled the winds and water was calmed by prayer and the power of God.

“In New York we can buy a large Loaf for 6 pence sugar 3-1/2 pence Butter 6 pence other things in like manner. Potatoes much like England in price and very good. Tea, Coffee & Spirits very cheap.. . . There were ships that sailed 10 days before us and had not come in when we go to shore. One ship had been 90 days on the water. Many of her passengers was almost worn out and many dead. Sister Eaves was delivered of a Male child on June 22nd. It died on the 27th and was buried on the 28th.”