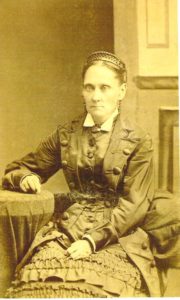 Lovina Smith was born on the 18th of September 1827 in Manchester, New York, just 3 days before her Uncle Joseph got the plates for the Book of Mormon.  She is the oldest child of Hyrum and Jerusha Barden Smith.  She was not quite 4 when the family moved to Kirtland, Ohio.  Here she watched the growth of the Church and particularly the building of the Kirtland Temple.

She was barely 10 in October 1837 when her mother died.  On the advice of his brother, Joseph, Hyrum married mary fielding.  Lovina had mixed feelings about her father marrying so soon after her mother’s death, but she grew to love and respect her new mother.

It was in Nauvoo where Lovina’s life took some drastic changes.  To begin with, she met a young man, named lorin walker, and in the spring of 1844 she accepted his proposal of marriage and the two made plans for a fall wedding.  Then came the events of June 1844!  On Saturday, June 22nd, Joseph and Hyrum crossed the Mississippi in an unsuccessful effort to forestall mob actions.  This caused Lovina to make some changes to her plans for marriage; she realized that if she wanted her father to be there for her wedding, it would have to be soon.

On Sunday, June 23, Joseph and Hyrum returned from across the Mississippi; as they approached Hyrum’s home, Lovina came out to meet them.

Joseph, in his loving manner, chided her;

“Lovina, when are you going to get married?”

To which she replied,

“Uncle Joseph, we were just waiting for you.”

“Go get your beau,” Joseph responded.

Lovina and Lorin were married that evening with the family present.  The next morning Joseph and Hyrum left for Carthage.

Joseph had asked Lorin to take care of Emma if anything happened to him, so after the martyrdom Lorin and Lovina lived in the Mansion house with Emma and when the Saints left Nauvoo, they stayed with Emma to provide help for her.  They lived in the Mansion House until about 1849 when they moved to Macedonia where the Smith sisters, Catherine, Sophronia and Lucy were living.

It was there where Lorin’s brother William found them in the spring of 1856.  While Lorin and Lovina had wanted to travel west to be with the Saints, they had not yet been able to accumulate the needed supplies for that journey.  With William’s encouragement, they began their westward movement by traveling with him to Iowa City, the jumping off spot for the immigrant trains.  William had been asked to help with the outfitting of the trains as the groups came in and Lorin and Lovina stayed with him and helped in that work.  Lorin was good at working with wood and was soon busy helping to make a new device that the Church was experimenting with – the handcart.

Through the early summer they worked to get several trains on their way.  The travel season was about spent and the crews were getting ready to close down the camp when the Willie Company arrived having been delayed by transportation.  They also reported that another group, the Martin Company, was behind them and they all wanted to get to the valley that fall.  Everyone went to work and did their best to get these people ready for making the trip so late in the season.

By the time all the companies were on the trail and the camp was cleaned up ready for the next year’s efforts, it was too late for them to go across the plains, so they went as far as Florence, Nebraska and spent the winter there.

In the spring, Lorin’s brother, William, headed west, but Lorin’s skills were needed in Florence and he was prevailed upon to stay there for a while.

It was in the fall of 1859 when they had an unexpected visitor, Lovina’s brother, John, arrived in Florence having traveled from the Valley.  John’s plans were to go on east as far as Nauvoo, visit with Emma and other family members and then head west in the spring, hopefully with Lorin and Lovina with him.

So it was that in the spring of 1860, Lorin and Lovina with their six children crossed the plains in the john smith company, arriving in the Valley the 1st of September.

They settled in Farmington where they lived for the next several years.

In October 1876, Lovina was expecting her 13th child, but things were not going well.  On Sunday morning, October 8, the child was delivered, but Lovina gradually slipped away and died that afternoon.  She was buried in Farmington, but her remains were later moved to the Smith family plot in Salt Lake City.