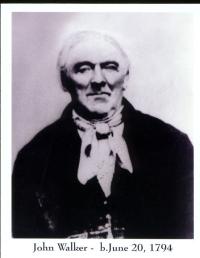 John Walker filled two missions for the Church in the Eastern States. He emigrated with the saints to Council Bluffs and was appointed President of a branch of the Church in that locality. He later moved to Farmington, Utah, and died there at the age of seventy-five.

John Walker, his wife and ten children were involved in or were in close proximity of the hauns mill Massacre. Lucy Walker’s comments on this ordeal are interesting.

“We passed through Kirtland just after the Saints had left for Far West. When we arrived in Caldwell County, we were surrounded by a mob of about forty persons with blackened faces. They ordered my frail and ill mother out into the deep snow, searched our wagons, took from us our arms and ammunition, pointed their guns at our children, cursed at us and threatened our lives.”

“We continued our journey until we came to a settlement on Shoal Creek, five miles from Hauns Mill. My father, together with another brother, went to the mill to confer with Brother Joseph Young regarding the threatening circumstances we faced. It was here that the mob fired upon men, women and children without giving any warning. My father, John Walker, was shot in the arm but was miraculously saved from death at the hands of the mob.”

Upon the death of Lydia Holmes Walker, wife of John Walker, the Prophet realized that John was so grief stricken that it appeared that he would not survive his wife’s passing and the hardships which they had been through. Feeling that a change of scene and circumstances would help, the Prophet called John Walker on a mission for the Church and arranged for the care of his ten children. Joseph and Emma “adopted” the four older children, William, Lorin, Catherine and Lucy.

Both William and Lorin Walker were especially close to the Prophet. William writes that he managed the nauvoo mansion under the direction of the Prophet. Lucy writes that Lorin was ever at the Prophet’s side, walking arm in arm together and conversing on many subjects.

At one point in the Prophet ‘s life when he was in jail my grandfather William Rogers (Catherine’s husband), personally obtained and paid for legal counsel to get the Prophet out of jail—he could not stand by and see an obvious injustice continued.

Lucy Walker writes in a most kindly way about how she and her brothers and sisters were treated in Joseph and Emma Smith’s home. She loved and respected them. She said,

“The Prophet and his wife introduced us as their sons and daughters. Every privilege within reach was ours. Every courtesy and consideration was afforded to us.”

William Walker, the oldest boy, says of the Prophet,

“In regard to his private life, as to the purity, honesty, charity, benevolence, refinement of feeling and nobility of character, his superior did not exist on earth.”

In these days when so much is said about the treatment afforded to women, Joseph’s comment as recorded by Lucy is very meaningful,

“…a man’s wife should be his bosom companion and the nearest and dearest on earth in every sense of the word.”

An interesting experience is recorded by Lorin Walker,

“Lovina Smith was doing a week wash when her father, hyrum smith, came home from one of his trips with the Prophet Joseph Smith. Hyrum asked his daughter when she planned to be married. Lovina said to him that she and Lorin Walker had been waiting for him to perform the ceremony. The Patriarch said if she wanted him to marry them, it would be that day. So Lovina removed her apron and went to find Lorin. They were married with the humble family as witnesses to the ceremony. Four days later the Prophet Joseph Smith and the Patriarch Hyrum Smith were martyred at Carthage Jail.”