Utah Territory received its share or more of visits from the grasshoppers in the ﬁrst 30 to 35 years of settlement. The report of the Entomological Commission of 1877 claimed that they had appeared in Utah every year except two since 1851, explaining that “this Territory is liable to suffer more or less, especially in the northern portion.”1

The worst year, by any measurement, was 1855, when grasshoppers invaded the territory from the far north through Iron County, wiping out the third sowing of some crops in Salt Lake County, destroying all or nearly all of the grain in some Iron County towns, and denuding whole ﬁelds elsewhere. Following a trip throughout the territory in the spring of 1855, Heber C. Kimball wrote to his son William, describing the extent of the devastation:

“From this place south as far as we went, the grasshoppers have cut down the grain, and there is not ﬁfty acres now standing of any kind of grain in Salt Lake Valley, and what is now standing, they are cutting it down as fast as possible.  In Utah county the ﬁelds are pretty much desolate; in Juab Valley not a green spear of grain is to be seen, nor in Sanpete, nor in Fillmore. In Little Salt Lake they are still sowing, also at Cedar City, that county being so much later the grain is not yet up, but the grasshoppers are there, ready to sweep down the grain as soon as it comes up. In the north as far as Boxelder the scenery is the same. . . . and to look at things at this present time, there is not the least prospect of raising one bushel of grain in the valleys this present season. . . . I must say there is more green stuff in the gardens in G. S. L. City than there is in all the rest of the counties; still there is a great many of the gardens in the city entirely ruined. Brother Wm. C. Staines told me this morning that he had 500,000 young apple trees come up and they are all cut down to the ground, and many gardens where the peach trees were full of peaches, every leaf and peach are gone.”2 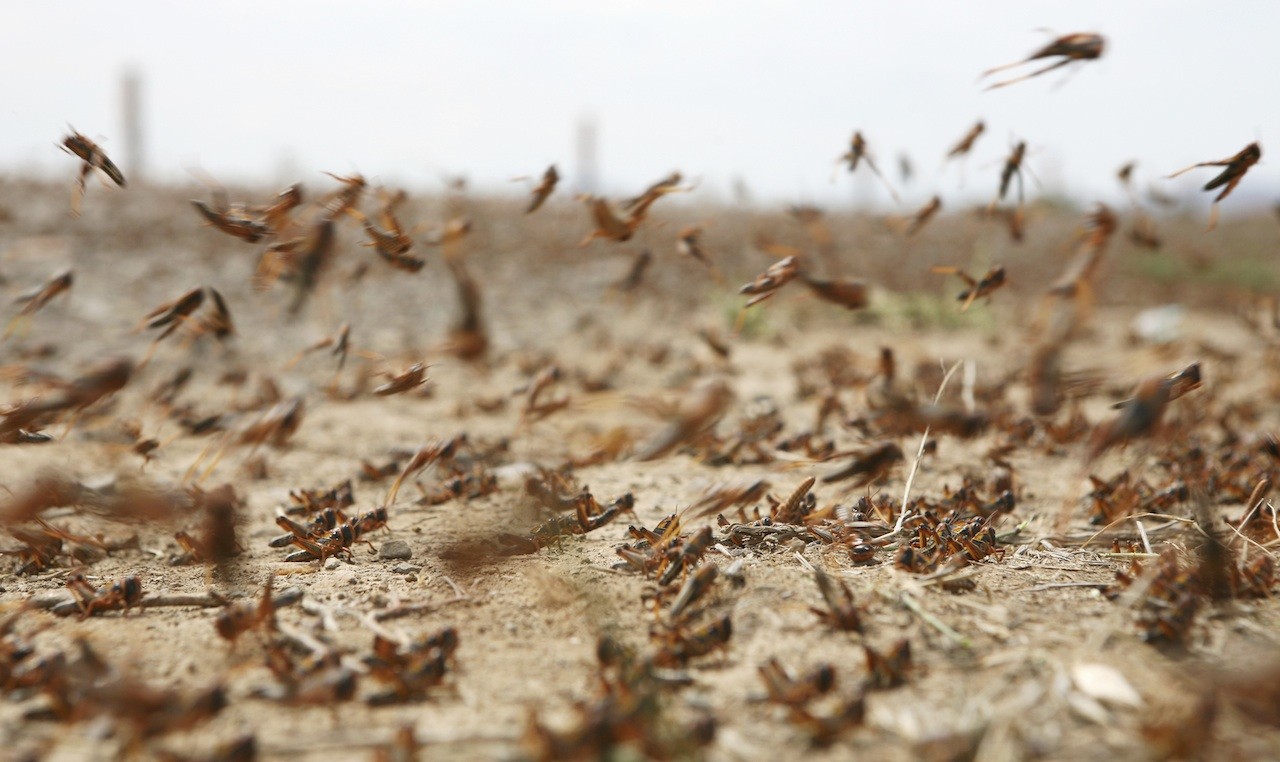 Twenty years later, it was still estimated that 70 percent of the cereals, vegetables, and fruits that year had been destroyed, making 1855 stand out as a year of crippling loss.3 What did the settlers consider to be an “appearance” of grasshoppers? In some years it may have been nothing more than a few indigenous insects hopping around in the ﬁelds. On other occasions, swarms of them ﬂew overhead for days at a time, but they did not necessarily do serious damage where they were sighted. In some years they were observed in the fall, depositing eggs that hatched the following spring, but no damage was done during the year of the egg-laying. In some communities crops were wiped out several years in succession. In 1877 the Entomological Commission reported that northern Utah, especially Cache Valley, was visited by grasshoppers every year from 1854 to 1870.4 Yet in response to a survey in 1875, the ofﬁcers of the Deseret Agricultural and Manufacturing Society reported the appearance of the “devastating Grasshopper” only in 1855 and 1866 through 1872, specifying that the 1866 appearance consisted only of depositing eggs. This indicates only six or seven years of grasshopper destruction severe enough to mention.

In summary, research shows that the peak periods of grasshopper invasion and devastation seem to have been 1854–56 (with 1855 being the worst year of the century), 1867–72, and 1876–79. Utah was practically free from serious grasshopper problems the last 20 years of the century. Assessing the number of grasshoppers invading Utah is difﬁcult. Appearances were described with such terms as “very numerous,” “immense swarms,” “by the millions,” or “myriads.” A more speciﬁc, though not necessarily exact, report from Tooele in 1855 claimed that there were about 40 grasshoppers on every stalk of corn.5 A correspondent from Pleasant Grove described the grasshoppers there with perhaps a bit of hyperbole:

“I do not think there were any more in Egypt in the time of Moses than there are now on my place, for the ground is literally the color of grasshoppers. We have to shut our doors to keep them out of our houses. The well, the cellar, the water ditches, everything is ﬁlled with the pests.”

This article originally appeared in Vol.60 No. 2 of Pioneer Magazine.