The first school in Utah was opened just three months after the advent of the Mormon pioneers into the valley of the Great Salt Lake, and from that time to the present, schools have been maintained and libraries established. The first legislative Act passed by the first Legislature of the Territory of Utah was for the establishment and building of roads and bridges; the second Act, was for the maintenance of schools. In 1850, the University of Utah was opened under the patronage of Brigham Young and the people. It was the first University established west of the Missouri River, and in a few years it had a library that would grace a modern College. School houses were invariably among the first structures of the Territory. The buildings were built of sun-dried brick, but they were effective and highly creditable to the people. The ideal of the Mormons has ever been that of higher education, for it is their belief that “the Glory of God is intelligence,” and that by education and faith in Jesus Christ, man comes to a realization of his better self.

A striking evidence of the growth of the school system since the admission of Utah as a state is shown by this:

There are more than 104,000 children within school age in the state. With the exception of states in which there is a considerable colored element of the population, Utah has a larger number of children of school age according to the adult population than any other state in the Union. 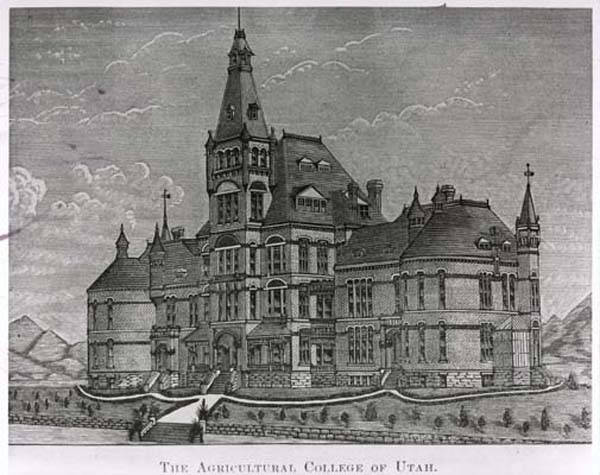 In the matter of enrollment in the public schools and attendance, Utah stands considerably above the average among the states, having an attendance of 84%, while the average throughout the country, according to Commissioner Brown, is less than 75%. The University of Utah is one of the most complete and best equipped in the West. It includes a school of arts and sciences, State school of mines and State Normal school. Students are attracted from nearby states and from as far East as the Mississippi River. The State University is located in Salt Lake, and maintains a branch at Cedar City in Iron County. The State Agricultural College is located at Logan. The merit of Utah’s schools was recognized at the St. Louis Exposition in 1904, when the Salt Lake common schools received a gold medal, the second highest award; the Salt Lake high school received a silver medal, standing third; the University of Utah training school received a gold medal; the State Normal school a silver medal; the Utah county public schools a bronze medal; the Indian school a bronze medal. The grand prize, the highest award given in the United States, went to the admirable school for the Deaf, Dumb, and Blind, at Ogden.

The Mormon Church has endowed two Universities and several Academies. The Latter-day Saints University, which includes normal academic, and business departments, occupies four buildings opposite the Temple in Salt Lake City. The splendid Brigham Young University at Provo, is a similar institution; this and the Brigham Young College at Logan attract a large attendance from the agricultural sections of the State. The Catholics have a complete system of religious and secular instruction in the principal cities of Utah. Among the most noted Protestant schools are the Rowland Hall (Episcopalian), Gordon Academy (Congregational), and the Collegiate Institute (Presbyterian), all in Salt Lake City. In Utah there is no conflict whatever between public and private institutions of learning. Here, as elsewhere throughout the nation, the “private schools are lending an influence that makes for a higher and better order of citizenship.