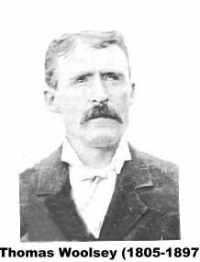 The Mormon Battalion volunteer, Thomas Woolsey (3 Nov 1805-5 Jan 1897), also a member of the Brigham Young Pioneer Company of 1847, was born at Fishing Creek, Lincoln (Pulaski) County, Kentucky, died at West Point, Sanpete County, Utah and buried in Wales Cemetery, Sanpete County, Utah, a son of Joseph Woolsey and Abigail Schaeffer, of Vandalia, Fayette County, Illinois. It was his mother Abigail Schaeffer Woolsey who embraced the Gospel and eight of her twelve children joined the Church and came to Utah.

Thomas Woolsey married seven women and left a large, functioning posterity. After returning to Council Bluffs in the 1848 train of Brigham Young from the Salt Lake Valley, Thomas Woolsey moved his families to Summer Quarters [about thirteen miles north of Winter Quarters] where he worked with John D. Lee and about forty other families to raise garden produce and oats and corn to feed the migrating Saints. He worked here, with several of his Woolsey relatives, until 1852, when he brought his families to Utah in the David Wood Company (1852).

His first wife was Mary Burrell (11 Apr 1813-1858), born near Cincinnati, Hamilton County, Ohio, and died at Provo, Utah County, Utah and is buried in the Provo City Cemetery but her gravesite has not been found. She is a daughter of Reuben B. Burrell and Lucinda Hanna, of Cincinnati, Ohio and Jackson County, Indiana. Thomas Woolsey and Mary Burrell were married 29 Apr 1829 at Salt Creek Township, Brownstown, Jackson County, Indiana and were sealed together 2 Jan 1846 in the Nauvoo Temple. Mary Burrell Woolsey came to Utah in the David Wood Company (1852). They had the following children:

Thomas Woolsey was sealed 26 Jan 1846 in the Nauvoo Temple to his second wife Julia Ann Mitchell (18 Feb 1828 – 10 Jan 1896) born at Medina, Medina County, Ohio and died at Manti, Sanpete County, Utah, where she is buried. She is the daughter of Abraham Mitchell and Anna Colpetzer. She came to Utah in the David Wood Company (1852). Thomas Woolsey and Julia Ann Mitchell had the following children:

Thomas Woolsey was sealed in the Nauvoo Temple 28 Jan 1846 to Elizabeth Ann Holdaway (14 Jul 1829-14 Jan 1905) born in Rochester, Hawkins County, Tennessee, daughter of Timothy Holdaway and Mary Elizabeth Trent. Thomas and Elizabeth Ann had one daughter Mary Melvina Woolsey born 1 Sep 1847 at Summer Quarters and she must have died before 1850, possibly at Summer Quarters. This marriage did not last very long, as Elizabeth Ann Holdaway was married 8 Oct 1849 at St. Louis, St. Louis County, Missouri, to Henry Godfutz Rabel of Germany. This couple was traveling to Utah in the James Pace Company (1850) when they had a “baby girl” born 30 Jul 1850 on the Mormon Trail, which was named Mary Melvina Rabel. Elizabeth Ann Holdaway and Henry Godfutz Rabel were living in Eldorado County and San Bernardino County, California and they had six children.

Thomas Woolsey was given permission by Brigham Young to marry Mary Lane born about 1805 in Pulaski County, Kentucky. They were married 13 Mar 1847 at Winter Quarters. Nothing further has been found about Mary Lane nor any children.

Thomas Woolsey married at Winter Quarters 18 Apr 1847 to Lucretia Willis, born about 1818 at Gallatin, Sumner County, Tennessee, daughter of John Willis, b 1782 of Newbern, Craven County, North Carolina, and Jane Kirkpatrick born 1788. No children have been found for Lucretia Willis and Thomas Woolsey.

Thomas Woolsey married at Kanosh, Millard County, Utah, before 1859, to Catherine Lucretia Hickerson (2 Feb 1816 – 2 Apr 1897), (divorced), the widow of Sampson Miles of Fayette County, Illinois. She was born in Bond County, Illinois, the daughter of William Loving Hickerson and Melinda Amelia Luster. She is a younger sister of George Washington Hickerson who married Thomas Woolsey’s younger sister Sarah Woolsey. Catherine Lucretia Hickerson Miles had nine children by Sampson Miles, all born in Fayette County, Illinois. Five of these children died young and four traveled with their widowed mother and their uncle George Washington Hickerson to Utah in the Benjamin L. Clapp Company (1856).

Nothing could be found of her life history until she was about 21 years of age, when she married Sampson Miles, of Perch, Kentucky, The young couple settled in Fayette, Polk Co, IL or Fayette Co, IL, secured land and began to till the soil.

Eight [nine] children were born to them but four of these, including a pair of twin boys, passed away during childhood. In 1855 the father, too, was called home, and she was left with four [five] children. The oldest was a boy of 18, [and another boy], the other 3 were girls. [Including Susan Maria Miles, who would become the seventh wife of Thomas Woolsey, see below.]

One year after the father’s death, Grandmother’s brother [George Washington Hickerson] who had migrated to Utah in 1849, called at his sister’s home on his return from a mission to his old home in Tennessee, and persuaded her to take her family and go to Utah with him.

She had not received the Gospel, and although her husband had favored going west with the Mormons, she would not consent, (being a staunch Methodist) “to follow those wicked Mormons”. She was very fond of her brother and probably the thoughts of being left without any kin, caused her to change her mind and accompany him to his new home.

On 15 Jun 1856 they left their all to overtake the first covered wagon train of Mormons, to cross the plains that year. The oldest daughter was sick with chills and fever when the journey began, and had to be carried from the house to the wagon. Her father’s brother who did not belong to the LDS church and was opposed to their leaving their home, predicted she would not live to go far, but Elder Hickerson promised her she would not have another chill, and she never did.

27 Jun 1856, they crossed the Missouri River and were met by a squad of 25 U.S. armed soldiers, who searched their wagon for fire arms and ammunition, but not finding any allowed them to proceed unmolested.

Four days later they approached a wagon train camped for the night; it was dark, Elder Hickerson thought it best to camp at a safe distance from the company while he did some scouting. Imagine his joy when he found it to be, not only the train he was expecting, but led by a former missionary companion of his, Elder Benjamin Clapp, as captain who made them very welcome. Their journey seemed much more safe now, for one boy and man could not have been much protection against a band of Indians if attacked.

So there we have it. We have found fourteen children by his first wife; eleven by his second wife; one by his third wife; and three by his seventh wife, for a total of twenty-nine children. Thomas Woolsey, at one point, said he had twenty-seven children. At another point, he said he had thirty-one children. At which point I threw up my hands and exclaimed “This will have to wait to be unscrambled until the Millenium!”