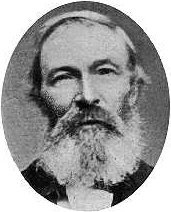 In the 19th century, shoemaking was a respected and much needed trade, but it was hard to make a living at this during the poor times in Wales. Thomas John was a shoemaker, and worked long days trying to provide food on the table for his family. He was a religious man affiliated with the Independent Sect, and served as superintendent of a large Sunday School of 400 to 500 members. He studied the scriptures regularly and could quote scripture as well as anyone around. In about 1848, Thomas heard of the prosperous times in America, so he pulled his meager belongings together and got work on the ship as assistant cook. When he arrived in America, he was very sick and had a felon [uncertain what that means] on one hand. He soon became discouraged and returned to England.

When he arrived in Liverpool, he met a party of men and women headed for America. When he explained that he had been there and that the times were hard there, they told him that it didn’t matter because they were going to Zion. They went on to tell him of Joseph Smith being visited by angels and of the restoration of the church. They also explained that he had received gold plates from an angel and that those plates contained records of a civilized people from the American continent from long ago, and that he had translated it into the Book of Mormon. Thomas hadn’t heard of such a place in America and his exposure to the people there was quite opposite to what one would call Zion. The people were wicked and vulgar. They thought nothing of profaning the name of the Lord and using other foul language unbecoming of gentlemen. Nevertheless, every time he tried to put those people out of his mind, he kept recalling the message that “The heavens have again been opened and Angels have again conversed with man.”

After returning home, Thomas learned that his aunt had been converted to the Church of Jesus Christ of Latter-day Saints. She related her experiences with the missionaries and the household she was a servant for. As he continued to study and learn of the gospel, he realized that his many friends and customers would turn against him if he joined the church. He finally realized that he must do what he knew was right, so he was baptized by Elder Phillip Sykes in May, 1851.

As feared, persecution mounted and Thomas could no longer own his own shoe making business because people refused to do business with him after that. His only income had to come from working for other shoemakers, so his family became even more destitute. It seemed that the whole world suddenly thought him a wicked man because he had been baptized into such a peculiar church.

As time went on Thomas’ reputation as a shoemaker began to take hold again and he was able to run his own business again. In fact, he began to prosper enough to contribute to the Perpetual Emigration Fund while saving for the emigration of his own family. The savings came slowly, but by March of 1861, he had saved enough for his family to go to America. They sailed for America on the New York Manchester ship. It was a very old ship and sank shortly after that voyage. It took 33 days to make the journey and things went well for those days. They landed at Castle Gardens, NY just after the battle of Bull Run was fought between the Union Army and the Secessionists. The people were afraid the enemy would invade the city of Washington and take the Treasury.

After their arrival, Thomas rented a house in Williamsburgh, just across the river from New York City, and began his trade of leatherwork and shoemaker. Thomas and his two oldest sons had lots of work because the military was in need of equipment. The John family stayed and prospered there for 14 months and saved enough to join the saints in Utah.

This was 1861 so it was then possible to take the train to Florence, NB (Winter Quarters). Thomas John and his family boarded the train and headed west but things turned against them at this point. One of the other emigrant saints on the train heard the engineer say he would send the Mormons to H—l before night. Shortly, the call was made that there was fire in the baggage car. They uncoupled it from the train but it burned completely and destroyed all personal belongings within. Nevertheless, the family made the journey safely. Their belongings were gone, so they were left destitute of nearly all they had. The family found the church had organized a large camp they called McAlister’s Camp for the emigrants.

After 6 to 8 weeks the Thomas John family finally got into a wagon train and made their way on to Utah. Captain Henry Miller led the group and it arrived in Utah Oct 17, 1862. It had 60 wagons and was organized in groups of 10 wagons with captains over each group. There were about 665 emigrants in the train. In the evening the wagons would form a large circle to keep livestock within and to protect from hostile Indians. This circle was called a carol.

The first three nights on the trail were spent on the banks of the Elkhorn River, which was not far out of Winter Quarters. The river had many fish in it and some of the company fished a good deal while camped at that location. Others spent time harvesting grapes which were in abundance along the banks of the river. The company saw many buffalo herds and abundant antelope, deer, and elk along the trail. They only harvested one buffalo, but had many deer and antelope along the way. This journey was made before the white man exterminated the buffalo by shooting thousands and then leaving the carcasses to waste.

This was not the end of the influence of the white man. Henry John documented the following:

“The horse and the cow were soon to take the place of the buffalo; sheep were to replace the elk, deer and antelope. Domestic fowl claimed the place of the wild turkey; grouse and little prairie dogs were given wheat saturated with poison in order to move them out of the way so fields of grain could be raised. Wild plums and bending branches of wild fruit were to be rooted up and the more luscious fruits- peaches, pears, apples and others- were to take their place. The Indian wigwams were to be moved; white man’s cottages and beautiful residences were to take their places.”

Henry Miller had a very stern reputation and lived up to that reputation on this journey as well. When the company came to the Green River, Captain Miller told them all to get out of the wagons and ford the stream on foot. The river was ice cold and one old man that had been very sick and worn out climbed on a mess box that was bolted on the back of a wagon. When Captain Miller saw this, he jumped into the river and pulled the old man off and threw him into the cold river. Twenty eight people died on the trip and many thought a good portion of those fatalities were attributable to Captain Miller’s harsh, unforgiving supervision.

After arriving in Utah, the Thomas John family settled in Wellsville for the next 5 years. They rented an old log cabin with a soil roof and no door or windows. The building measured 14 X 16 ft., yet it was more spacious than the portion of the wagon train tent they had shared with two other families. Thomas John’s boys were strong workers and were able to find work harvesting crops, pressing molasses, and hauling timber from a nearby canyon. There was no money but the locals worked out equitable methods of payment in kind. For example, those harvesting potatoes were paid in potatoes; those harvesting grain were paid in grain; and timber haulers were paid in timber. It worked well and all were happy.

They then moved up to the malad valley in 1867 and planted the first wheat west of the Malad River. They helped found the city of Portage.