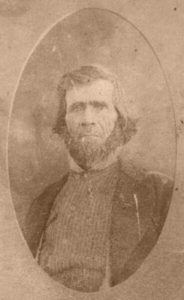 Born May 28, 1884, thomas jefferson adair was a cowboy on the Blue River Wilderness, south of Nutrioso, Arizona, where his father, Samuel Newton

Adair, was a rancher. Samuel had served a mission with Jacob Hamblin among the Hopi and Navajo Indian tribes in Southern Utah and Northern Arizona.

Thomas received his call to the Southwestern States for The Church of Jesus Christ of Latter-day Saints and was set apart on April 1, 1904; he was assigned to labor in Arkansas.

Elder Adair received a letter from Mission President James G. Duffin at the headquarters of the southwestern states mission in Kansas City, Mo., informing him of what he should take.

“Bring no books nor extra clothing except one pair of garments. Knit garments are worn by almost all the elders. We have made special arrangements with the ‘Western Knitting Co’ in Salt Lake City, whereby Elders can get a 20% discount. Also, if you want to get a Prince Albert suit in Salt Lake City, go to West’s Mail Order House. They have agreed to sell you a $21 suit for $14. We supply Elders here at the office with suitable grips, clothing of all kinds (except garments), books, tracts, etc. We keep on hand Bibles specially suited to our work. Bring no trunks or valises: you cannot take them with you in your travels, and we have no room to store them here. May the blessings of the Lord attend you on your journey to this city and throughout your mission.”

A few pages from Elder Adair’s journal show he and his companion spent part of their time looking for food and for places to sleep. After eating a morning meal, they were on their way, teaching as they went, and seeking food and lodging each night. They used each opportunity to preach the gospel and bear their testimonies.

“Friday 5 August 1904. We arose this morning feeling able to pursue our journey, and shortly after eating our breakfast began to do so. We ate dinner with a man by the name of Moreland. After dinner we had all the muskmelons we could eat. . . .

“Wednesday 10 August 1904. After eating our breakfast we borrowed a kettle, a tub, and some soap and went to the spring and washed our clothes. We got our washing out about noon, ate our dinner, and then wrote some letters while our clothes were drying. When they were dry, we put them in our grips and started on our journey. We walked five or six miles and found us a place to stay. The man’s name was Mr. Wickersham.”

During his mission, Elder Adair became ill. There are no details to show when or where Elder Adair contracted typhoid malaria, but malaria generally comes from drinking impure water or is contracted from mosquitoes. He had served 28 months as a faithful missionary when he contracted the disease. He was released from his mission and started for home.

Evidently, Elder Adair’s parents received word that he had arrived in St. Johns, Arizona, on July 23, 1906, and was quite ill with a fever. His parents lived in Nutrioso, about 75 miles from St. Johns, and they traveled to his bedside to help him. They found he was too ill to travel any farther, and he passed away about a week later on August 1, 1906, at age 22.