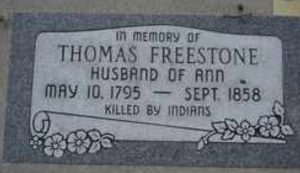 Thomas Freestone, the father of my great grandfather, George Freestone, was born in Fixton, Suffolk, England on 19 May 1795. This was a comparatively prosperous time in England, and Thomas could have stayed there in relative comfort. But in about 1825 Thomas left England to emigrate to Prince Edward Island, Canada. In August 1837, Thomas, now forty-two years old, married Ann Fall, age twenty-four. Ann was born in England too, on 6 August 1812 in Aldburrough, Yorkshire, and had moved to Prince Edward Island with her parents in about 1818. Ann was a gentle, religious, refined lady.

This couple sought to improve their fortunes by moving in 1840 to the U.S.A. They settled on a farm in central Ohio. Life was good for these faithful Methodists. They loved the soil which they farmed, and prospered modestly for a few years while their children were being born — George in 1838, James in 1840, Elizabeth Ann in 1842, Rhoda in 1844, Phoebe Ellen in 1847 (she died as an infant), Johanna in 1849, Emma Sarah in 1852 and Jane Marie in 1855 — eight children in all, of which seven lived to adulthood.

The LDS missionaries came in 1850 and baptized them. Ideally, everything should have gotten better, but got worse instead. In about 1851 they lost their farm, which had been mortgaged to pay for a season of severe illness. In 1852, they felt the spirit of gathering to Zion, sold another small acreage they had and all their other possessions, acquired a wagon and, in late summer, joined the Saints who were heading west. They struggled through fall rains and mud and reached Mt. Pisgah in Iowa in a snowstorm on Christmas Day.

The family stayed in Mt. Pisgah, Iowa over the winter of 1852-53, and finally, with help from kind fellow Saints, arrived in deep poverty at Winter Quarters. On their journey, the father and older boys had worked at anything they could do, for food or money to sustain them. When they reached Council Bluffs in the spring, they found an emigrating company nearly ready to leave for the West. Again they found help from other Saints, quickly acquired an outfit and supplies, and joined them.

In 1858, the Freestone family had been in Utah five years. The oldest child, George (my great-grandfather), was twenty years old, the youngest, Jane, only three. The father, Thomas, was sixty-three years old. The family discussed the possibility of moving to another location where they might find more security. Thomas went to Southern Utah on a scouting mission, probably looking for a new family location. Near Parowan he was ambushed by hostile Indians and killed by an arrow. One of the Indians sent word to the family of this tragedy, and claimed he had mercifully put the dying man out of his misery and buried him in an unmarked grave.

The older boys became the providers for the growing family. Three years later George married and left home. Four years after Thomas’ death, as mother Ann visited one day with her bishop about their difficult circumstances, he advised her to marry again, and introduced her to a man named Hodnett. The two went to the Endowment House in Salt Lake City and were married the very next day. Hodnett proved to be a good provider for the family, but was reputed to have been hot tempered and difficult. However, Ann was good natured and gentle, and they managed together.

With the unmarried children, they moved to Orderville and put all their sheep into the united order (retrieving them again later when the Order failed). Ann’s health and eyesight failed in her later years and she moved back to Alpine to live in the home of her youngest daughter. She died there on Christmas day in 1888, at age seventy-six.