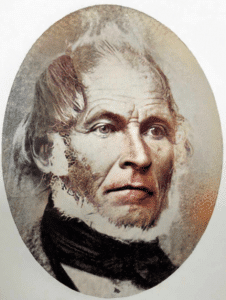 Thomas Atkin was born February 10, 1804 at Legsby, Lincolnshire, England. He was the eighth child of ten born to John and Mary Ashley Atkin. All ten children lived to maturity and married. The family lived on a farm in this farming community. Thomas received only a limited education but had the opportunity to serve as an apprentice to a carpenter and builder. While apprenticing in Nottingham he met Mary Morley a young woman from the community of Newark not far from Nottingham.

Thomas and Mary were married at St. Mary’s Church in Nottingham. He was 22 and his bride not quite 26. The couple stayed at the home of Mary’s parents in Newark for a couple of months before moving to his home at Legsby. She stayed with his parents while Thomas went on to Louth, a larger city in Lincolnshire, to obtain employment. Mary gave birth to a daughter, Eliza, while in Legsby. The child died three months later.

Mary joined her husband in Louth. Thomas became a first class carpenter and through his industry and economy succeeded in securing valuable property in the prosperous and pleasant town of Louth. There, on Union Hill, he built four substantial residences. He rented three of them and his own family lived in the fourth one. Five more children were born to this couple. However, only Emily, Thomas Jr., and George lived to maturity. A first son named George and the last child, Hannah, died within the 1st year of their birth.

Thomas had lived an honest upright life, but had not given much attention to religious matters. About the year, 1840, his wife, Mary became seriously ill with a “rupture” in her side. The doctors could do nothing to help her. Thomas, watching her suffer, resolved he would be more devoted in serving the Lord, if only the prayers and desires of his heart and those of his children regarding his beloved wife would be granted. Eventually, Mary was healed. He did not forget the resolution and promise he had made with the Lord and commenced in earnest to inquire of his spiritual advisors. Thomas and Mary became members of the Methodist Church. They were both known and respected for their kindness and liberality to the poor and needy. Thomas read the scriptures. He began looking for doctrines and a church after the pattern given by Jesus Christ. At the time he looked and listened in vain.

In 1843 the elders of the Church of Jesus Christ of Latter-day Saints began preaching in Louth. Thomas became deeply interested in the message brought by the humble elders. He sought the Lord earnestly for a light to guide him in his search for truth. Through his investigation and prayers he became convinced of the truth and taught what he had learned to his wife and family. Thomas was baptized March 25, 1843 by Elder Henry Guerden. His wife and daughter were baptized on July 1, 1843, and his son Thomas, Jr. on July 2, 1843 by Elder George Byers. The youngest son, George, was baptized by Elder George Robbins on September 13, 1846.

Glowing accounts of the splendid opportunities for settlers in America were continually circulated in England. Thomas had always thought Louth would be his home for life. However, when news spread of the Atkin’s baptisms the converts became objects of hatred by former friends and associates and even by near and dear relatives. Misrepresentations of the Church were made. Thomas now had the spirit of gathering and had a great desire to cast his lot with the main body of the Church in America. He was soon ready to leave his comfortable home, his prosperous business, his native land, friends and dear relatives. Conditions were not so he could leave immediately so he and his wife tried to teach the principles of the Gospel to their families. Only a sister of his wife, Hannah, accepted it.

In the spring of 1844 arrangements were made to leave England when the next ship sailed. But when the sad news of the martyrdom of the Prophet Joseph Smith and his brother Hyrum was announced, the Atkins decided to wait until a more favorable time. That time came in January of 1849 when they left Louth for Liverpool. Other friends from the church left, also. They sailed on the ship “Zetland” under the direction of Orson Spencer with 358 saints on board. After a voyage of ten weeks they arrived at New Orleans in America. From New Orleans they traveled up the Mississippi River by steamship to Saint Louis where Thomas purchased supplies. They then traveled up the Missouri River by another boat arriving at Kanesville, now Council Bluffs. Wagons, stock and provisions were purchased. The wagon train, captained by Orson Spencer, departed for the West June 6 and arrived in the Salt Lake Valley September 22, 1849.

Within a few days they were able to obtain a city lot of one and one fourth acres in the Eleventh Ward and built a one room adobe structure before winter set in. They began to adapt themselves to their new conditions. In the spring Thomas and his boys planted a garden on their city lot. Even though it was newly broken prairie land and without a fence they succeeded in raising a good supply of early vegetables and with the scanty amount of flour they had brought with them were able to get along very nicely until the harvest in the fall. In the spring of 1851 Thomas purchased a 40 acre farm near the mouth of Settlement Canyon in Tooele Valley – and commenced to build a home. Later he and his sons constructed another home in a fort built to protect the settlers from the Indians. In 1853 a city plot was surveyed about a half mile north of the fort and homes were built and Tooele City became a permanent settlement. Lots were purchased near each other by the father and his two sons. Their daughter who had married when they lived in Salt Lake also made her home in Tooele. As Thomas was a carpenter he helped build many buildings in Tooele. His son, George, was his able assistant in his building projects which included the first church in Tooele. Thomas also helped beautify the settlement with lots of trees and flowers.

Thomas was a religious man and when Eli B. Kelsey was appointed as bishop after Bishop John Rowberry, he was chosen as his first counselor. He also served a mission to England from 1860 to 1863. Thomas was a kindly man but had a stern disposition. He had a mind of his own and knew how to use it. In addition to being a carpenter and builder, he raised live stock and farmed.

After his wife’s death in 1882 he married her widowed sister, Hannah Morley Thompson. Thomas died December 16, 1888 in Tooele and is buried in the Tooele City Cemetery.