The St. George Tabernacle proclaims the New England roots of many Utah settlers more clearly than any other Mormon pioneer building. At first glance, it could be an eighteenth-century New England city church transported to the arid West, its walls of Boston brick transformed into Okie sandstone. The tabernacle’s simple rectangular shape with a tower projecting in front topped by a spire, and its simple light-filled interior with a balcony on three sides, are typical features of New England meetinghouses and churches in the decades before the American Revolution,

The impressive size and quality of the tabernacle are largely the result of Brigham Young’s personal interest in this Southern Utah outpost. In the spring of 1861, as the first settlers were trying to scratch out a foothold in this dry valley, the Mormon prophet declared,

“There will yet be built between these volcanic ridges, a city, with spires and towers and steeples, with homes containing many inhabitants.”

He had proposed the settlement as a “cotton mission,” a warm southern plantation to grow cotton, grapes, and other semi-tropical crops for the Mormon empire, and he took a personal interest in the community’s prosperity. In 1862, he wrote to Erastus Snow that St. George should build a tabernacle to seat 2000 people that would “not only be useful but also an ornament to your city.” He intended for this ambitious building project to provide gainful employment, unify the people in a common endeavor, and bring outside resources of money and manpower into the struggling town.

The cornerstone for this ambitious undertaking was laid by President Young on his 52nd birthday, June 1, 1863, and the last of the stonework was completed in 1871. Each of these milestones was celebrated with songs, a dedicatory prayer, and the Hosanna shout. Miles Romney, a builder born in New England, became the architect of the project. As the sandstone walls rose, they showed the skill of the stone masons, each one leaving the distinctive marks of his tools and technique in the texture of each stone. The large timbers for the roof structure were brought down from the Pine Valley area in the mountains to the north. For interior decorations, the pioneers found a deposit of gypsum and used it to produce plaster of paris. They made their own molds of clusters of grapes, cotton blossoms, and other decorations for the cornices and ceiling.

Some stories of the construction have passed into local folklore . . . [including one related to] the building’s most impressive features, the large multi-paned windows. The builders ordered the 2244 panes of glass from New York City, to be delivered to the harbor in Los Angeles. Glass was expensive, and the town owed $800 on the order before they could take delivery. David Cannon, a local church leader, had succeeded in raising only $200 as he prepared his wagons for the trip to Los Angeles. Just as he was about to leave, a Danish immigrant named Peter Nielson came to him with $600 in gold. After a sleepless night of pondering and prayer, he had decided to give the small fortune he had saved to build his own house. The glass was brought back from California and installed. Many of the original wavy panes can still be seen in the windows. Peter Nielson also prospered and was able to finish his home.

The installation of a clock in the tower was a major event in the life of the city. Its bell tolled each hour, creating a standard for all the events of the community. One local resident wrote,

“It was grand to have a clock. We loved it because it gave us prestige. It raised the morale of the people. We went to church on time, came home on time, and opened and closed parties on time. The old town had moved forward… From now on, people were born by the clock, they died by the clock,”

The bell also sounded for important occasions: the arrival of President Young, the deaths of important citizens, and, on January 6, 1896, the official granting of statehood to Utah.

The building has some distinctive features that make it unique. At the front of the main room, behind the pulpit, is a false door that provides an ornamental backdrop for the rostrum. The door is surrounded by an extravagantly decorated door frame, with tapered moldings and tall pinnacles, looking like a giant Victorian mantlepiece. Parts of this door frame were painted to look like gray granite, while others were grained to look like oak. The columns supporting the balcony were also grained to resemble granite with marble tops, while doors, window frames, benches, and other woodwork were grained in imitation of oak. The beautiful plasterwork on the cornice and ceiling celebrated local agriculture with its clusters of grapes and cotton blossoms.

Although the building has hosted thousands of church meetings and cultural events, two gatherings there are particularly remembered.

In the 1880s, Father Lawrence Scanlon, Catholic bishop of Utah, visited the area where miners were digging for silver north of St. George. He wished to say mass for the miners and was delighted when Mormon leaders offered him the use of the tabernacle. The St. George choir, directed by John M. Macfarlane, learned and sang the mass in Latin to an appreciative audience of miners and townspeople.

More than a decade later, LDS President Lorenzo Snow visited St. George in the midst of economic depression and a local drought. The Church was deeply in debt and President Snow had been praying for help. While in St. George, he felt inspired to preach the law of tithing, encouraging the people to pay a full tenth of their income to the church and promising them rain for their crops if they did. He returned to Salt Lake City, preaching the same message along the way. The people responded, the rain came, and within a few years, the Church’s debts were paid.

Throughout more than a century of service, the tabernacle has been an object of community pride. In the last few years, an extensive renovation project has restored many of its original interior colors and finishes. It remains both a useful center for religious and cultural activities and an ornament to the city, just as Brother Brigham had wanted. 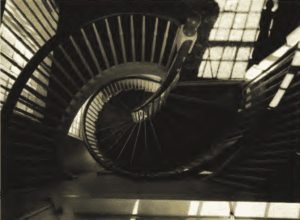 Miles Romney, a master builder; schooled in English architecture and supervisor of the St. George Tabernacle construction, designed two elegant, free-standing, circular staircases attached to either side of the foyer-type rooms at the entrance to the main hall. He called them his crowning achievements.

Brigham Young, however, requested that the gallery be installed a few feet lower than originally planned because the balcony was so high that people sitting could not see the pulpit. Romney had already completed the two circular stairs and refused to move them. Brigham Young devised an ingenious plan to lower the balcony with jacks and braces. Using the strength of 200 men, the pillars were cut, a section was taken out, and the balcony was lowered five feet. Today, tabernacle audiences who climb the staircases step down eight steps to the balcony, where they can see the pulpit.

Paul Anderson, BYU Museum of Art curator: A licensed architect with degrees from Stanford and Princeton, Paul Anderson was hired in 1976 by the LDS Church Historical Department to work on the restoration of historic buildings. When the Brigham Young University Museum of Art was under construction, Anderson became the head of design at the museum in 1992. He sang for several years in the Utah Symphony Chorus and authored four hymns in the LDS hymnal. Still an architect on the side, Paul has written several books on architecture and historical sites.