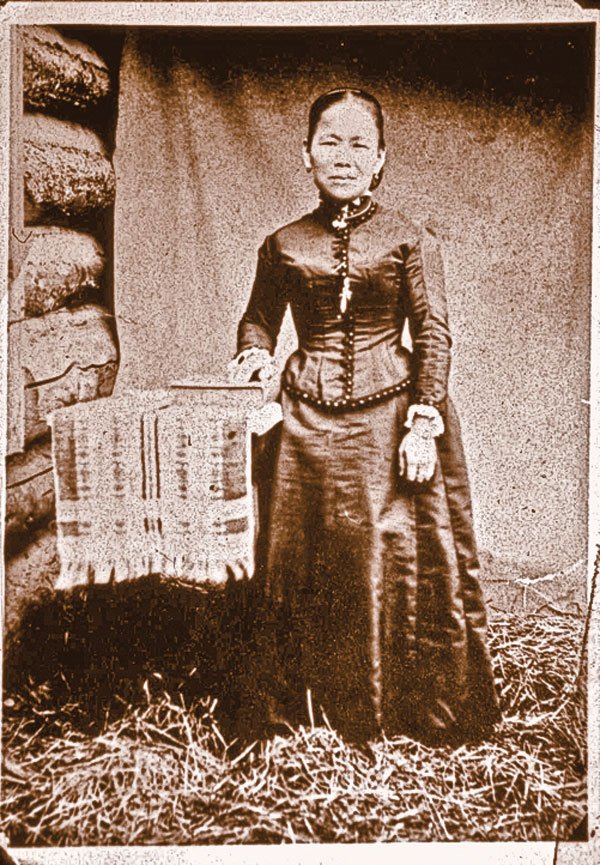 It was not until late 1860 and early 1870 that Idaho began to be prospected for gold, mostly by men who had failed to find profitable claims in California or Montana. Among the early prospectors were two men who had done placer mining in California.

Arriving on the Salmon River, they tried out their gold pans on the sands of the river and were surprised to find traces of gold. The gold was not too plentiful anywhere along the river, but enough was found to be reasonably profitable almost anywhere.

Panning gold on the Salmon River was somewhat different than in California. The banks of the river were covered with black volcanic boulders and the high water of spring deposited sand among these boulders, all of which sand contained a small amount of gold. In order to pan this sand, many black boulders had to be moved and the sand which had accumulated around them during high water was carefully gathered and eventually panned in the river. The sand was not plentiful and much labor was expended in moving the black boulders in order to get at the gold-baring sand. In time many miners arrived on the Salmon River and this movement was called the Salmon River Gold Rush.

As time went on, the Chinese heard of the Salmon River Gold Rush and they began to move into the area in increasing numbers, until nearly all the river banks were lined with placer miners. Like all Chinese, these miners liked to gamble, and most of them lost their gold dust to a certain Chinaman, who happened to be a professional and successful gambler, whose name was Hong Kong. Eventually this gambler had accumulated considerable gold and started a store where he sold Chinese goods to the many miners along the river

On the river and living at the same camp as the Chinese merchant was a man known as Charles A. Bemis, who considered himself a very good gambler. In fact, gambling was his one great passion and he liked to gamble with the Chinese miners because he usually won. This continued for a considerable time.

Eventually Bemis got into a poker game with the Chinese merchant, who was also a very successful gambler. As the game progressed, Bemis continued to win consistently. He first won all of the gold dust the Chinaman had; then he won the Chinese store, which left the merchant with only one asset — his Chinese slave girl. After drawing what he thought was a very good poker hand, he finally decided to wager his slave girl on the turn of the cards. He turned up three aces but it happened Bemis held four of a kind and the Chinaman lost his girl to Bemis.

Her Chinese name was Lulu Nat Hoy, but he called her “china polly,” by which she became known to all the prospectors along the river. She lived with him at his camp in Warren, did his cooking, mended his clothes and became very useful to Bemis, who had never married. He was about 48 years old at this time.

Bemis continued gambling but apparently never gave the Chinaman an opportunity to get his girl back. One day he was engaged in a game with other miners when a quarrel arose. Bemis was accused of cheating and was shot in the chest. Everyone expected him to die in a few minutes, but he did not die immediately. Polly took him to their camp and carefully nursed him back to health after a long illness. During this time, Bemis fell in love with his Chinese nurse and later they were legally married. One day Bemis was playing poker with one of the placer miners, Johnny Cox, a half-breed Indian, in the saloon he had recently opened. The Indian lost. Next morning Cox came back and demanded the money he had lost. Bemis refused his demand and Cox shot him in the face, the bullet entering just below the right eye.

Bemis bled very profusely and a messenger was sent to Grangeville for a doctor. When he arrived, he pronounced the case hopeless and returned after collecting a fee of $500. Polly, who witnessed the shooting, put Bemis on a door and had him carried to his camp, where she cleaned the wound and eventually nursed him back to health after an illness of three months.

Polly had been admitted to the United States under a work permit such as was issued to laborers on the Central Pacific Railroad. When her permit expired, Bemis married her to prevent her return to China, and the marriage certificate was dated August 3, 1894.

The Chinese eventually became so numerous along Salmon River that the white miners held a meeting and voted to run off all Chinese along the river before they took over completely. This was done and all Chinese were forced to leave. All except Polly, who had married an American citizen. When the gold rush played out at their camp at Warren, they moved upriver to a location on the south side of Salmon River opposite the mouth of Crooked Creek.

Here Bemis built a comfortable cabin and Polly planted a garden and orchard. They lived there the remainder of their lives. Bemis did some placer mining each spring but the pickings were poor. He operated a ferry but never charged anything for crossing travelers. From all reports, he and Polly were very friendly and entertained all passing travelers with much hospitality. In later years, when Bemis’ eyesight became impaired, Polly always accompanied him on hunting trips and routed out deer for him to shoot.

Prospectors continued to pass up and down the river for many years and Polly furnished them with fresh vegetables and fruit since she had the only garden on the river. They managed to live in reasonable comfort on what gold dust Bemis could wash out and the produce Polly sold. In time two prospectors, Shep and Kinkhammer, located across the river at the mouth of Crooked Creek and remained until after Polly’s death.

Charles A. Bemis eventually became ill with what must have been tuberculosis and during the last two years of his life was bedfast. He died in 1922.

When Dr. R. G. Frazier passed by in 1931 on his first voyage down the Salmon River, Polly was living alone and was 79 years old but still active and cheerful. She had forgotten her native tongue and spoke only in pidgin English.
The two neighboring prospectors across the river rigged up a telephone line to her cabin and used to call her every morning to see if she was ill or needed anything. When they called one morning and there was no answer, they crossed the river and found her confined to her bed. After great difficulty they got her on a horse and took her out to a small hospital in Grangeville, the nearest town, where she remained for three months. She died on November 6, 1933.

Along With Doc Frazier

In 1939 Doc made another trip down the Salmon River and I was an invited guest. Polly had died in the meantime, but the cabin, although empty, was still in perfect condition. We explored it for souvenirs but the only relic Doc could find was an abandoned gasoline flatiron. In an ash heap at the back of the cabin I found an old, nickel-plated sixshooter that had been through a fire, and that was the extent of our loot. I took the accompanying photo of her cabin, which I hope no crazy prospector has burned down since — a fate which meets all abandoned cabins in the west.

For many years China Polly had been the only woman on the Salmon River and was known to every placer miner who visited the area, some of whom remained and established themselves at convenient locations as Bemis had done. For many years, Polly had provided vegetables to all the miners who passed and had become the official nurse for anyone who became sick or injured. Some came to call her the “Angel of Salmon River.” She never refused anyone whether they could pay or not.

When I was there in 1939, she was gone and I regretted very much not having the opportunity to meet her because she was the most interesting character who ever lived on Salmon River.  She began her life as just a pawn in a poker game, but during her long lifetime, China Polly became admired and respected by everyone who ever met her.

(Author’s Note: Some information was obtained from “River of No Return,” by Robert G. Bailey; “Pioneer Days in Idaho County,” by Sister Alfreda Ellensohn and various pioneers of the Salmon River country.)