This article originally appeared in Vol.58 No.2 2011 issue of Pioneer Magazine 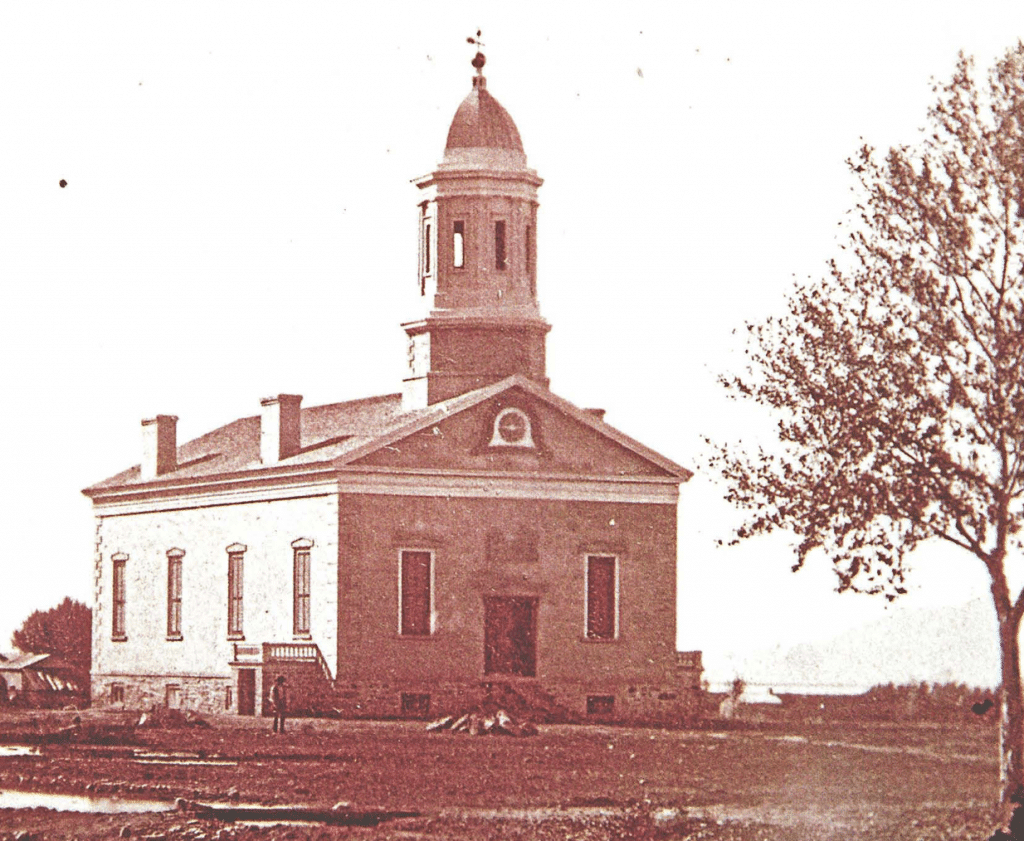 The old tabernacle was the scene of stake quarterly conferences and stake monthly priesthood meetings, as well as Sunday city-wide services, which were held for many years. The edifice was also used widely for community events, including concerts, lectures, patriotic gatherings and political meetings. It was the place of major funerals [for Church and community leaders].

Brigham Young Academy made temporary use of the Old Tabernacle after a disastrous fire of Jan. 27, 1884, which destroyed its first home. The Old Tabernacle was the scene of many a special occasion—like the memorial service held Sept. 26, 1881, for United States President James A. Garfield, who had fallen by the hand of an assassin. The day had been proclaimed by the new president, Chester A. Arthur, as a national day of mourning.

The Meeting House (Old Tabernacle) faced north, sitting back 30 to 40 feet from Center Street. It was a three-story structure—the basement compartmentalized for classrooms and other uses; the auditorium at the “ground level,” as well as the gallery and the “upper rooms” of the vestry.

Eighty-one feet long and 47 feet wide, the building had an imposing octagonal tower and belfry of lumber construction. The massive walls were six adobes thick.1 The adobes were extra large—two to three times the size of conventional brick. Walls rested on a sturdy rock foundation seven feet thick at the base and four feet at the top. The foundation extended approximately three feet above the ground.

The 500-pound bell in the tower obviously was brought to Utah by ox team, since the transcontinental railroad was not completed until May 10, 1869, nearly two years after the Tabernacle was finished.

Saturday, Aug. 24, 1867, was the memorable the Provo Meeting House was dedicated.

An impressive roster of Church dignitaries was present. It included President Brigham Young, who took charge of the two-day conference; Apostles Orson Hyde, Orson Pratt, John Taylor, Wilford Woodruff, George A. Smith and George Q. Cannon; Joseph Young, of the First Council of the Seventy; Edward Hunter, the presiding bishop; and others. Apostle Taylor, later to become the third president of the Church, gave the dedicatory prayer.

The dramatic arrival in Provo of Brigham Young and his company for the dedicatory services was described by George D. Watt in this excerpt from his dispatch published in the Deseret News of Sept. 4, 1867:

“We were preceded into Provo City by a mounted escort in uniform, and the strains of a good brass band, and a martial band.”

“Elder Orson Hyde, from Sanpete, standing in the street hat in hand, bowed his welcome.”

“The schools were out in their best, all seeming delighted to greet the President and his friends. When we approached opposite the new Provo Meeting House, we passed beneath a triumphal arch with mottoes of welcome extending across it.”

“Among these tokens of welcome, I would add another quite as cheering to us, suggesting as it did an abundance of creature comforts awaiting. I refer to the portly proportions of Bishop William Miller standing at his gate ready to guide us into good quarters. His hospitable smile made us feel easy and at home.”

“The bell in the spire of the new House rang out its welcome; and I must say that I liked its tone; memories of other days were awakened, and we thanked God for a prophet’s voice and home among the mountains and valleys of Utah.”

President Young and the six apostles present inspected the Meeting House and “accepted the same with pleasure from the committee: Alex F. Macdonald, Myron Tanner and Thomas Allman. They had done a good work. At 10 a.m. the doors were opened to admit the eager multitude, assembled from throughout the county. Every aisle and corner was filled.”2

Brigham Young called the meeting to order and “remarked that this House should have been built twelve years ago, and now it was entirely too small.” Then he made a rather startling announcement: “We will dedicate the House and then, when it is necessary, will repair to the bowery to continue our services.”

The Provo Choir, led by James E. Daniels, seated at the north end of the gallery, the opposite end from the pulpit, sang, with Sister A. H. (Emma) Noon serving as organist. President Young then asked the congregation to be “devotional” in their spirits and to concentrate their minds and not be gazing around the house during the dedication by Apostle John Taylor.

True to Brigham Young’s announcement, the conference moved to the bowery outside the Meeting House for the afternoon session. The new building simply could not accommodate the valley-wide throng which had come for the occasion.