Spring comes early to the Moapa Valley of southern Nevada. In late January, you can see the green begin. Against a backdrop of desolate hills, each bush flaunts pale new leaves.

Spring must have been the best season for the pioneers. Before the crop-curdling heat of August, before summer rain flooded the river, before malaria filled the marshes—they must have enjoyed this gentle season. In spring they could hope. In 1864, Brigham Young called the first group of settlers to the banks of the Muddy Creek.

“Young extended the Cotton Mission this far south for several reasons. For one thing, the Latter-day Saints wanted to establish missions among the Indians.”

“This riverboat dream may seem silly to us, but the Army had actually navigated the river in 1857. In 1864, when the Civil War had interrupted all importing of textiles, Young was especially anxious to find new routes for transportation.”

And so they came. joseph warren foote and thomas smith were leaders of the new mission. The settlements of St. Thomas, at the junction of the Muddy and Virgin rivers, and St. Joseph, a few miles upstream, were named for them. 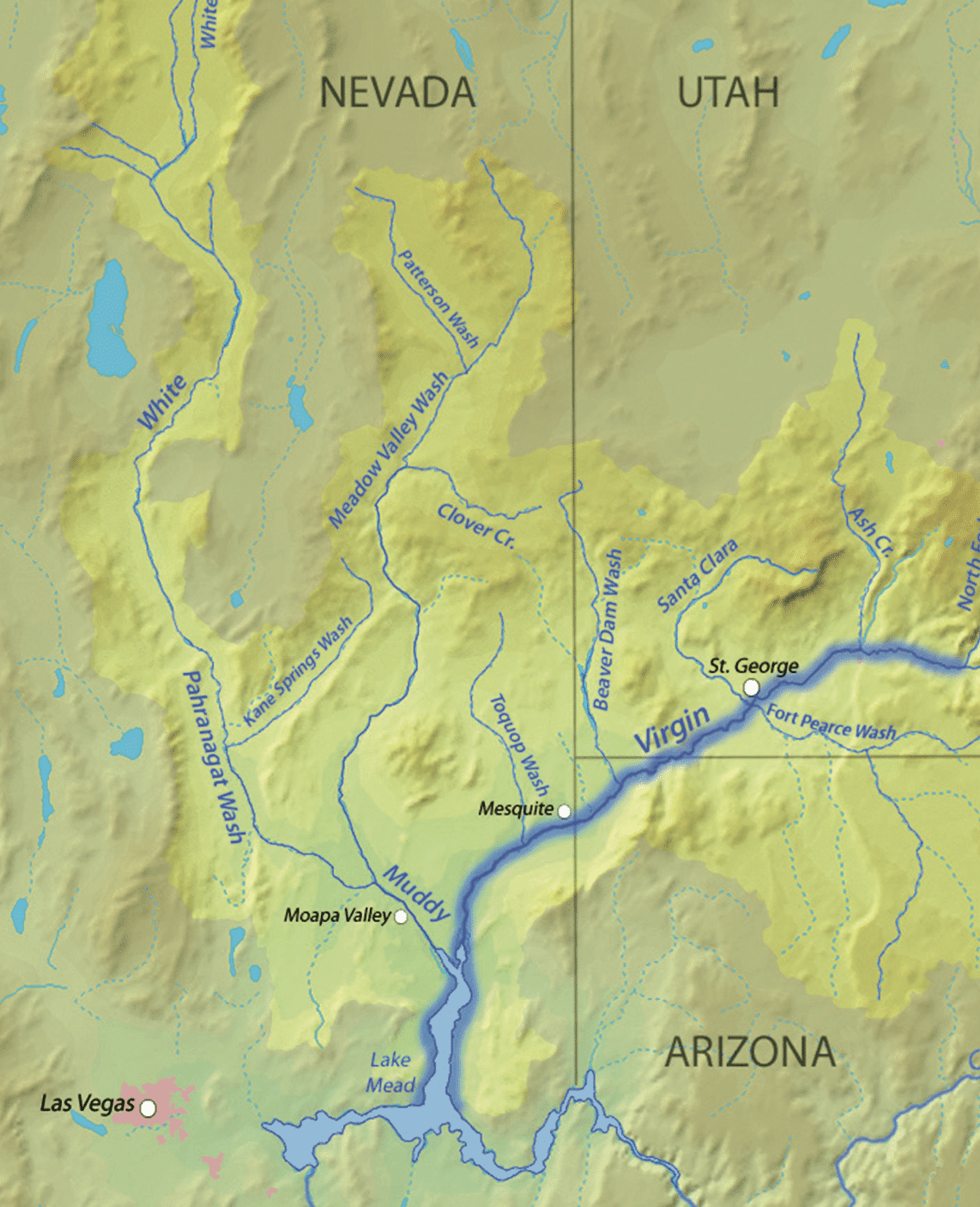 In the spring of 1865, they built a fort and planted wheat. There were 45 families in St. Thomas in the first year of the muddy mission. Their journals list the usual litany of troubles: Floods destroyed their canals and crops. Indians stole their cattle. Grasshoppers came in hordes.

And then there were problems unique to this part of the desert: Mosquitoes bred in the reeds along the river. There were more scorpions, and rattlesnakes proliferated. Summer was unbearable.

Arrington quotes from the journal of Lucy Allen, who became ill with malaria. At first she had the fever every day for months. Then it came less frequently, perhaps only once a week. She wrote,

“I had to bake the days I didn’t shake.”

“They would take their bonnets, aprons or some green brush in their hands, run as far as they could, throw them down and stand on them until their feet cooled off. Then run again.”

Brigham Young had trouble filling this mission. Some that were called would hire replacements, replacements who were ill-equipped for the privations they faced and went back home.

But the stalwart stayed and worked hard and had children and marveled at the growing season. They could get six cuttings of alfalfa a year—twice as much as they could get in Salt Lake.

In 1868 they settled a new town, called Overton. And in fact they might have stayed forever were it not for the federal government constantly expanding the boundaries of the Nevada Territory and, later, of the state of Nevada.

After having paid taxes in Utah and Arizona territories for five years, the settlers were told of a new survey that put them in Nevada. The county assessor of Lincoln County asked for two years’ back taxes, payable in gold.

Brigham Young advised them to decide for themselves whether to stay or leave. In the spring of 1871, all 400 settlers of the Muddy Mission gathered for a vote. A family named Bonelli stayed. Everyone else moved back to Utah.

In 1877, however, the pioneers were back, this time on the virgin river—which is actually much muddier than the Muddy.

edward bunker was bishop in Santa Clara and established the town under the principles of the United Order. This experiment in communal living and working was first suggested by Joseph Smith and was tried in various Utah communities, but always abandoned. When some residents of Santa Clara wanted to give up on the United Order, Brigham Young allowed the rest to found a new town.

Bunker and his group owned all the land in common, ate together in a communal kitchen and shared every chore—from plowing to churning butter. Though the United Order lasted only a few years, historian Juanita Leavitt Brooks credits a disciplined beginning with the town’s ultimate success.

The Virgin River was foul and salty and even more likely than the Muddy to flood, destroying canals and crops. Brooks describes the summers like this:

“The heat was the kind that thickens the whites of eggs left in the coop and makes lizards, scurrying from the shelter of one little bush to another, flip over on their backs and blow their toes.”

Her grandfather, dudley leavitt, and his two brothers were among the town’s founders. Leavitt had five wives and 52 children. He and his children later moved across the river to found the town of Mesquite. Unable to make a living, he became a mail carrier. His offspring, along with others from Bunkerville, eventually drifted back to the Muddy.

Nevada officials looked more kindly on the settlers the second time around. And as for the settlers, Andrew Jensen, Church historian, wrote in the Deseret News in 1892,

“The people here find no reason for complaint as they receive back in school funds considerably more money than they put out in taxes.”

Today, these early settlements are clearly Nevada towns. Bunkerville might look like rural Utah—with houses of native stone and trailer homes and everyone’s wash flapping on the line—except that the pastoral scene is framed in flashing lights from the Mesquite casinos.

In Logandale, palm trees ring the school playground. Down the street a sign proclaims these fields of Arabian horses belong to Wayne Newton. Overton is on the shore of Lake Mead now; it’s growing into a resort town, all new and adobe-colored and clean.

Yet something of the Utah pioneers can still be found. Each town has a road called Leavitt Street or a Leavitt family home on the national register. There’s a historic marker to Brigham Young at one small museum, a planter box filled with cotton at another.

The greatest tribute to those who settled and farmed southern Nevada, however, is not to be found in museums, or even in the streets and buildings they left behind.

Their tribute is in the landscape. The towns are still small enough to be dominated by the bare hills that surround them. Visitors need only glance to the end of any street to see the desolation the pioneers must have seen, to feel their isolation, and to realize the magnitude of their work and their determination.