“Rather than see my wives and daughters ravished and polluted, and the seeds of corruption sown in the hearts of my sons by a brutal soldiery I would leave my home in ashes, my gardens and orchards a waste, and subsist upon roots and herbs, a wanderer through these mountains for the remainder of my natural life.”— brigham young 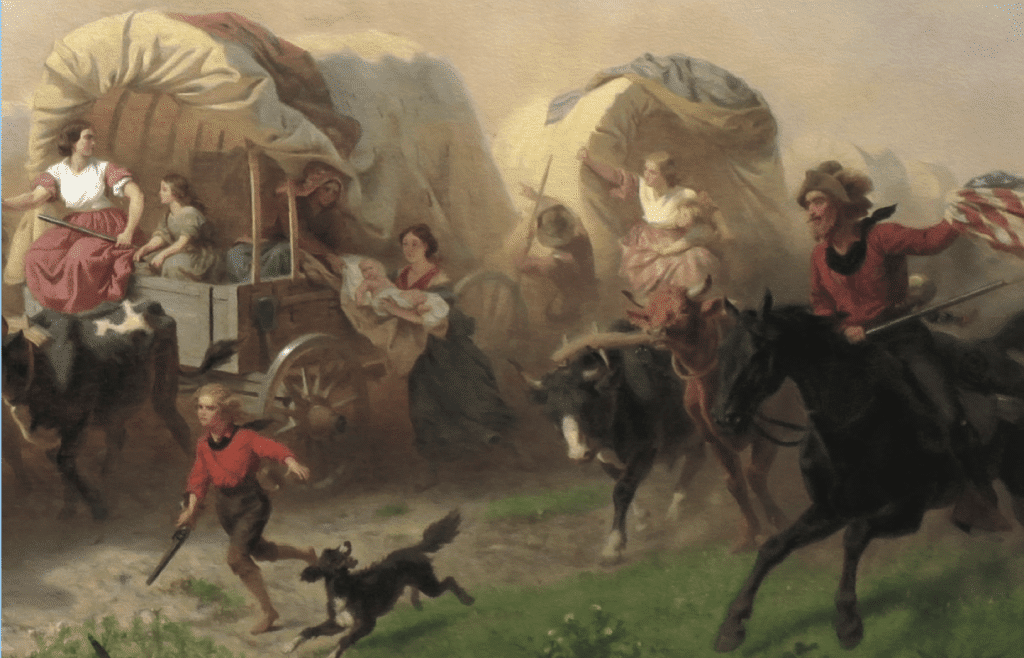 The utah war, in which no battles were actually fought, resulted in a mass dislocation of people called “The Move South.” President Brigham Young announced in March 1858 that all settlements in northern Utah must be abandoned and prepared for burning if the US Army should arrive to take over. Settlers living north of Utah County abandoned their homes and moved southward, leaving only a few men in each town and settlement.

Major Samuel Smith remained with a rear guard in Brigham City, where he assigned Willis H. Boothe to command the “minutemen” in preventing the Indians from burning the settlement, although they were instructed to do so themselves should hostile soldiers enter the valley.

“One can imagine the feeling of the people as they left their homes and farms, but God was pleased to bless their lands and much grain and hay ripened unattended; and their houses, which were broken into by curious Indians who strew things about, were otherwise left intact Most of the exiles from Brigham City located temporarily near Fayson, Utah County, living in their wagons and dugouts, existing on the year’s supply of flour brought with them,”1 Eva Dunn Snow, granddaughter of early pioneer Simeon Adams Dunn, tells of her family’s move. Simeon’s wife, Harriett, gave birth to twins on December 31,1857, The tiny girl died shortly after birth, and two days later Harriett died, and both were buried in Brigham City, Ms, Snow adds: “Three months later, in April 1858, the call came for all Saints to leave their homes in northern Utah, and journey southward. Simeon loaded a few provisions and household effects into his covered wagon, assisted his motherless children to their place in the wagon box, and cracking his long whip over the backs of his oxen, commenced his journey. He had also provided a wagon for his eldest daughter (Mary Dunn Ensign) and her three little girls and they traveled together. The husband and father of this little family, Martin Luther Ensign, at that time was serving as a missionary for the Church [in England],

“As they proceeded on their way, baby Henry became very ill. They camped on Kay’s Creek [now Kaysville], and there they saw the life depart from their lovely three- month-old baby son and brother. The father made his little family as safe and comfortable as possible in this temporary camp, and with a sad and heavy heart slowly wended his way back to the landy grave in the Brigham City Cemetery. Very near to it he dug a very small new grave, and in it tenderly laid the remains of his baby boy.

“He found the town empty, except for a few men who had remained behind, ready at a moment’s notice to touch a match to the homes and buildings if the enemy should enter the city. He went into his house, expecting to spend the night there, but it was so quiet and lonely it was more than he could endure, so he went to the stable, lay down by his faithful oxen, and spent the night near them. Early the next morning he was on his way to rejoin his family. He found them safe and well, and they continued their journey as far south as Payson, where they made their camp and remained until the Saints were counseled by the Church leader, to return to their homes.”2

It wasn’t until July 1, that Orson E Whitney recorded,

“A peaceful settlement having been reached with the U.S. Army, most of the people returned to their deserted homes and resumed their accustomed labors.”4

Families completed the journey home by late summer or fall. The men left behind to guard the settlement had been faithful to their neighbors in watering crops, and returning residents were glad to see most crops had thrived and ripened through the summer.

“The Move South . . . “was carried out in strict military order, each ward being organized into tens, fifties, and hundreds, with a captain over each. Families were expected to transport their own furniture, in addition to food and clothing…

“Church records and assets were removed or buried by ihe public works department. One group hid all the stone that had been cut for the Salt Lake Temple, and leveled and covered over its foundation so that the plot would resemble a plowed field and remain unmolested. Another group boxed all of the tithing grain in bins and transported twenty thousand bushels to specially erected granaries in Provo. Additional wagon trains carried machinery and equipment to be housed in hastily constructed warehouses and sheds.

“The Move South occupied almost two months. It was completed by mid-May. A daily average of six hundred wagons passed through Salt Lake Gty during the first two weeks of the month. An estimated thirty thousand Saints left their homes in Salt Lake and the northern settlements The exodus of such a large body of people drew national and international attention to the Church.’ – Excerpts from “The Utah War,” Church History in the Fulness of Times Student Manual (2003), 368-79.

Sarah Seibel Yates retired as editor of the Box Elder News Journal of Brigham City, Utah after forty years ofcovering local news. She researched and wrote many historical articles and a series of interviews with veterans of World War n. A University of Utah graduate, she is a continuing author for the Brigham City History Project