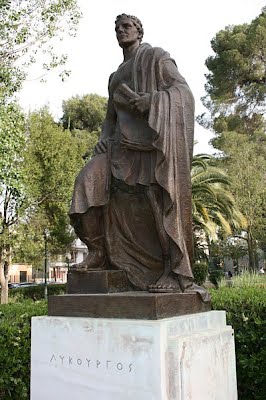 On Lycourgou Avenue, across from the Old Courthouse, is the statue of Lycurgus (abt. 800b.c.), Father of Sparta, King and Lawgiver. lycurgus created a constitution for Sparta and established the Senatorial System, giving the people a voice in government.

Dr. avard tennyson fairbanks of the University of Utah was commissioned to create the sculpture. The original sculpture is displayed at the Fairview, Utah Museum of History and Art. The bronze statue was presented to the people of Greece on behalf of the American people by the SUP Memorial Foundation (led by Daniel C. Jackling of San Francisco).

This was probably the first time a work of art was presented to Greece by the United States, symbolic of the harmonious relations of the two countries.