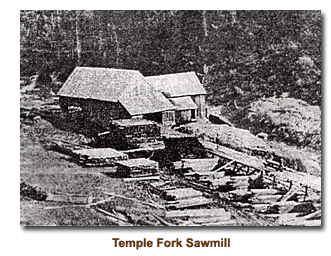 At a conference in Logan, Utah, in October 1869, brigham young told the people in Cache Valley to start making roads in logan canyon.  He called on the bear lake wards to send 30 men with their camp equipment, as a great amount of material would be hauled out to build a temple.

The site for the temple mill was selected on May 9, 1877 by charles card and Thomas X. Smith.  There was water to supply power and plenty of red pine or Douglas fir.  On May 11 Elder Card took Paul Cardon, george bott, B. M. Lewis and Edwin Clark up to Maughans Fork, (afterwards called Temple Fork) to start erecting the saw mill.

There was a big job to be done during the summer of 1877.  On November 4, 1877 Elder Card sawed the first board.  From then on the mill sawed more than four million board feet.

Life was wonderful most of the time at the saw mills—the sound of the saw eating its way through a pine log, or the odor of fresh pine sawdust, the sound of the choppers up in the timber and the tall pines crashing to the ground.

Down the long dusty drag road the bull whackers came in with heavy drags of logs.  Some of the logs would cut three 16 ft. lengths.  When the oxen knew it was their last trip for the day they were eager to get in.

The two bull-whackers may have as many as eight yoke of oxen in their team.  They were Joe Morris and William Athay from Bear Lake.  There were other drivers— Henry Price from Paris, Idaho; Charles Christensen from Bloominton; Harry Stevens from Hyrum.  There were 84 head of cattle at the mill.  The men used a bullwhip to give orders but hardly ever touched the ox.  He could pop the whip over the oxen’s head with a report as loud as a .38 pistol.  The whips were about 12 feet long, and were braided by George Sparks.  The yokes were much stronger than the standard yoke and were made of cottonwood by Elder Lindsey.

The cattle were put in a large corral and Richard Hinks, the night herder, would take care of them until morning.

About 15 men stayed at the mill.  The sawyers were Joseph Schvaneveldt and James Fogg.  The foreman, David Lamoreaux, was also the doctor.  The blacksmith, Charles Lundberg, was kept busy making and putting on ox shoes.  John O’Brian was the first cook at the mill.  When Joseph Wright came up as sawyer his wife took charge of the kitchen.  She was succeeded by Emma B. Smith.  Helpers were Heber Smith, Bell McCulloch, Linda Clard, Hanna Jenson, Agnes Izatt and others.
February 27, 1880 the snow was deep.  Seven young men took their teams to break a trail to Wood Camp.
Not far from the mill a snow slide caught them.  Two of the men, William King and Nephi Osterholdt. with three teams were under 30 feet of snow.  The death of these young men  left two widows.  Wood Camp was the halfway station between Logan and Maughan’s (Temple) Saw Mill at the mouth of White Pine Hollow and the U. O. Mill in Steam Mill hollow.  These are the mills that sawed white pine, or Engelmann spruce, for finishing lumber.  (Joseph Lowe prepared the white pine for finish lumber at a time when modern equipment was not available.)  Wood Camp was maintained by the Church.  Workers could get meals and lodging with stable and feed for their horses.  The men that cut wood to burn lime stayed here in the winter and cut the wood for the lime kiln on Steam Mill flat.  Nathaniel Haws had charge of this camp during winter and had charge of lime burning in summer.

A Lot Of Hay

It required a lot of hay to supply the camps, mills and quarries.  A large hay baler was made.  This machine was about fifteen feet high and compressed the hay by means of a weight which was pulled up and dropped as the hay was being shoved in from a platform.  The motive power was supplied by a horse hitched to a long beam which swung about a three-quarter turn and back.  This baler could put one ton of hay into four or five bales.  The hay was tied with rope.

An accident occurred at the hay baler on September 12, 1881.  Indians from Washakie were bailing hay when the weight became wedged and would not fall.  Young John Hinks, age 13, tried to help the Indian get it loose.  In a moment of thoughtlessness he stuck his head in to see what was wrong when the weight fell and crushed his skull.

In March 1886 word reached Logan that the Temple Mill had been burned.  The snow was deep 20 to 30 feet in places.