Presiding over the north end of Main Street in pioneer village, is the Summit County little rock chapel. The church, nestled between the poplar and oak trees of the Lagoon amusement park, is surrounded by flowering gardens of every color and shape. The light-hued facade of the Chapel is an imposing and inspiring scene which suggests solemnity; a stark contrast to the bustling midway of the amusement area. One moment children are screaming as they careen down the curves of the Jet Star 2, the next moment there are whispered comments of awe in the Rock Chapel. 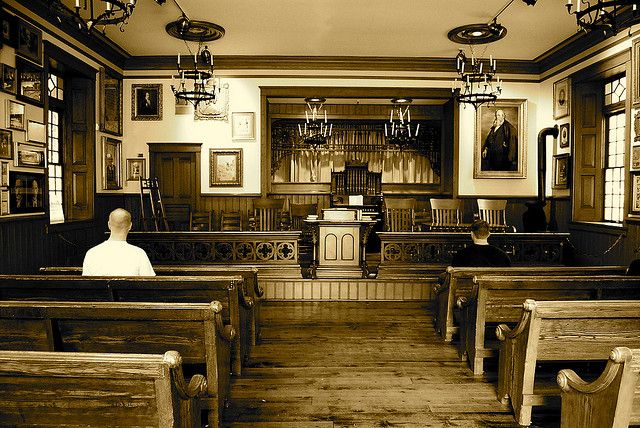 This building, constructed by the original pioneers who came to Utah in 1847, originally stood on Main Street in Coalville. It was first constructed in 1853 and was used as a fort against Indians. The windows of the church had many a gun poking through, with frightened townspeople huddled behind the two-foot thick walls. Later, when relations with the Indians got better, it was used as a courthouse.

In 1869, Brigham Young came from Salt Lake City and dedicated the building as a church. From that point on, it became the center of religious, political and social life for the people of Summit County. The building was used for 80 years, then, because times change and the community grew, the Little Rock Chapel was obsolete and destined to be torn down.

But Horace Sorensen, who had a vision of the future through preserving the past, was not about to let the church be destroyed. In the early 1950’s he moved it to his Pioneer Village on Conner Street in Salt Lake City. Then, in 1976 it was moved, intact, to the present-day Lagoon site.

The building contains the original church pews, chandeliers which still burn candles, the original pot-bellied stove, stained glass windows and the lectern. It’s all there to enjoy. The Old West wasn’t exactly like you will see it at Pioneer Village, but the combination of natural setting, painstaking restoration and real attention to detail make Pioneer Village with its Little Rock Chapel and 40 other buildings, a fine place to spend a summer day.