Lot Smith was bom in May 1830 in Williamstown, Oswego County New York, to William Orville and Rhoda Hough Smith, the fifth of twelve children. In late 1835 or early 1836 William and Rhoda invited LDS missionaries to teach them the restored gospel, which they accepted. By 1837 they had joined the body of Saints in the Nauvoo area. Lot effectually grew up in the Church, and at age sixteen, became the youngest member of the mormon battalion. He reportedly had to stand on tiptoe to meet the height requirement for enlistees.

When US troops under General Albert S. Johnston approached Utah Territory in the fall of 1837, twenty-seven-year-old Lot was appointed to lead a small LDS militia assigned to harass the federal troops as they moved through western Wyoming and into northern Utah—and, if possible, to discourage or delay their entering the Salt Lake Valley. 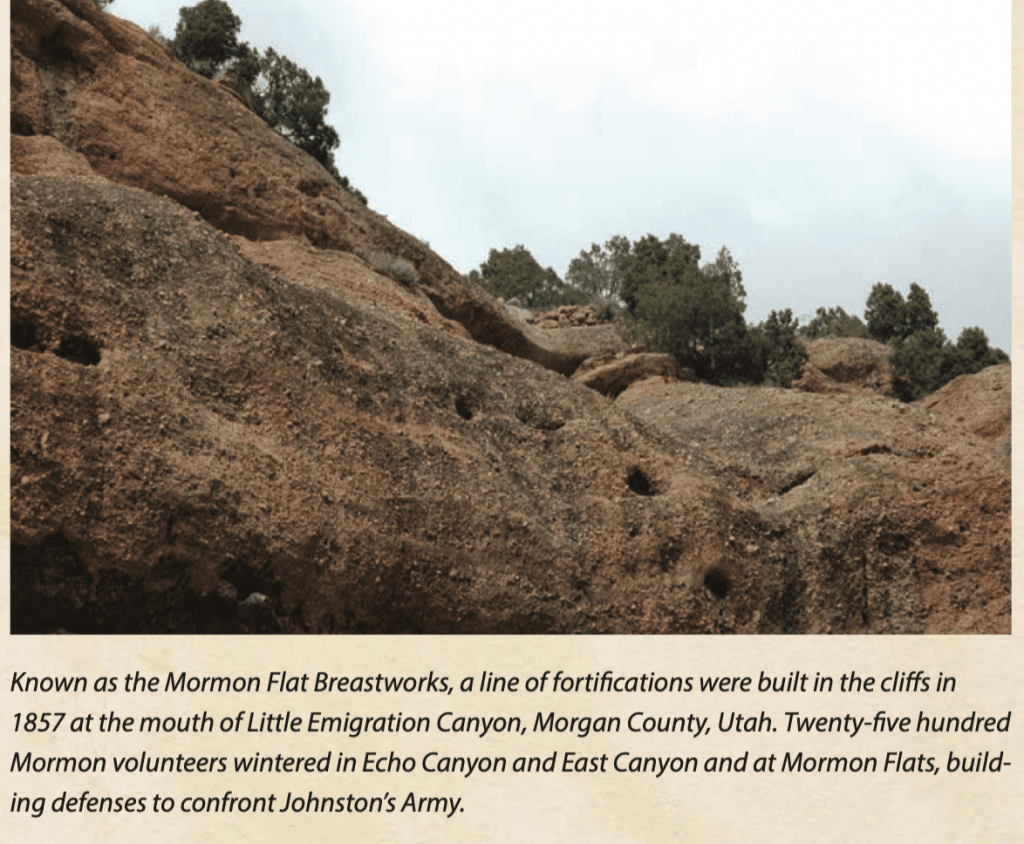 Smith’s account of his militia’s exploits also reveals much about its narrator: a young man of remarkable wisdom whose faith and courage more than compensated for his inexperience as a military commander. The following excerpts from Smith’s journal begin with his receiving his militia assignment from Daniel H. Wells.

General Wells, looking at me as straight as possible, asked if I could take a few men and turn back the trains that were on the road or burn them. I replied that I thought I could do just what he told me to. The answer appeared to please him and he accepted it, telling me that he could furnish only a few men, but that they would be sufficient, for they would appear many more to our enemies. As for provisions, none would be supplied as we were expected to board at the expense of Uncle Sam.

At 4 o’clock [a.m.], Oct 3d, we started, numbering forty-four men [and four officers, including Smith himself]. We rode nearly all night and early next morning came in sight of an ox train headed westward. I left half of my men to get breakfast with the others and proceeded to interview the bull-whackers [civilians hired by the government to drive supply trains for the Army], On calling for the captain, a large fine-looking man stepped forward and gave his name as Rankin. I informed him that we wanted him to turn his train and go the other way until he reached the States.

He wanted to know by what authority I presumed to issue such orders. I replied, pointing to my men, that THERE was part of it and the remainder was a little further on, concealed in the brush. He swore pretty strongly… however, he faced about and started to go east, but as soon as out of sight, would turn again towards the mountains.

US troops shortly came and took the supplies from this wagon train to protect them from Smith and his men.

Losing the opportunity to make much impression on Rankin’s train, I thought something must be done speedily to carry out the instructions received [from Wells], so I sent Captain [Horton David] Haight with twenty men to see if he could get the mules of the [T]enth Regiment on any terms. With the remaining twenty-three men I started for Sandy Fork to intercept trains that might be approaching [from] that direction. On the road, seeing a large cloud of dust at a distance up the river, on the old Mormon road, I sent scouts to see what caused it. They returned, overtaking me at Sandy [Fork], and reported a train of twenty-six large freight wagons.

After traveling fourteen miles, we came up to the train, but discovered that the teamsters were drunk, and knowing that drunken men were easily excited and always ready to fights and remembering my positive orders not to hurt anyone except in self-defense, we remained in ambush until after midnight.

I then sent scouts to thoroughly examine the appearance of their camp, to note the number of wagons and men. . .. When they returned and reported twenty-six wagons in two lines a short distance apart, I concluded that counting one teamster to each wagon and throwing in eight or ten extra men would make their force about forty. I thought we would be a match for them, and so advanced to their camp.

As Smith and his men approached the camp, they discovered that there were two trains of twenty-six wagons each. But by placing his men in such a way that, in the darkness, it would appear there were more men than he actually had, he approached the first wagon train.

I inquired for the captain of the train. Mr. Dawson stepped up and said he was the man. I told him I had a little business with him. He inquired the nature of it, and I replied by requesting him to get all of his men and their private property as quickly as possible out of the wagons, for I meant to put a little fire in them. He exclaimed, “For God’s sake, don’t burn the trains.” I said that it was for His sake that I was going to burn them, and pointed out a place for his men to stack their arms, and another where they were to stand in a group, placing a guard over both.

At this moment. Smith is interrupted by a man claiming to be a messenger from yet another supply train, saying that he had dispatches. When Smith demanded that the man turn them over to him, the man replied that they were verbal only and that he had no written messages to share.

I told him that if he lied to me, his life was not worth a straw. He became terrified; in fact, I never saw a man more frightened. The weather was a little cool, but his jaws fairly clattered….

While I was [thus] engaged with the first train, a guard of the second train came down to see what was going on. I told him to go back and not move and that I would be up soon and attend to them. My scout said, afterwards that when the guard returned he squatted down by a wagon wheel and never moved until I came up. … By [this] time I had my men scattered out, guarding the different interests, [and] they appeared to me to have dwindled to a very small body, but the sixty or seventy prisoners [for with extras, the prisoners numbered that many) neyer discovered it. . . .

When all was ready, I made a torch, instructing my Gentile follower [that is, one of the prisoners from among the members of the supply train] to do the same, as I thought it was proper for the Gentiles to spoil the Gentiles. Out of respect to the candor poor Dawson had showed, I released him from going with me when we fired the trains. .. . We rode away leaving the wagons all ablaze.

Through the winter of 1857-58, Smith’s militia continued to harass Johnston’s troops and the wagon trains that supplied them, diverting or burning supply wagons and stealing a large herd of cattle. There would never be an actual armed confrontation between Smiths militia and federal troops, although in early 1858, there was a close encounter with a 300- troop unit in Echo Canyon. But Smiths men were able to evade the unit and return to the Valley safely. Indeed, the only gunshot wounds received by members of Smiths militia were accidental, (he result of a single shot from a misfired weapon; the ball shattered the thigh bone of Orson P. Arnold, grazed the side of Philo Dibbles head, and went through Samuel Batemans hat. This accident was unfortunate for two reasons; it seriously injured Arnold, and it occurred just as a US cavalry was nearly upon them.

Arnold . . . fell with his leg under him, the jagged points of the broken bone sticking out, while the blood streamed from the awful wound. It looked as though he would bleed to death in five minutes. We laid our hands upon him according to the Order of the Church, and asked our Father to preserve him, for we knew that we could not.

While engaged setting the broken bone, a picket guard came running into camp and reported two hundred cavalry close upon us. Under the circumstances, nothing could have produced greater consternation. One of the men moved that we surrender. I told them that I would say when to do that. He then proposed that we run. I replied that I would kill the man that made that motion. Then I made my first war speech.

I told the men that we were not out here of our own choice, on our own business. Our people and their rights were being assailed. It was the Lord’s work that we were engaged in, and we were called by Him to protect our homes and our religion. If He suffered those troops to come near us, we would trust in Him and whip them, no matter about their numbers.

The boys gathered around me and said that I had spoken right, that they would stand by me if I would stand.

Undetected by the cavalry, Smith and his men would end up carrying the injured Arnold thirty miles in a hammock on a pole, miraculously finding necessary water sources in the high deserts of Wyoming and eventually leaving Arnold with “mountain men who nursed him back to health while Smith and the rest of his company continued their assignment. All returned to the Valley the following spring.

Lot Smith completed other assignments at the request of Church leaders, including important groundbreaking work in the settlement of Arizona. He was killed in an Indian ambush of Saints at Tuba City, Arizona, at the age of 62, in 1891. He was buried near his cabin.

After Smiths remains were excavated and reburied in Farmington in 1903, many friends and dignitaries attended a memorial service in his honor. James Sharp, a fellow militia member, declared,

“I have this to say of my Commander there lies a man who knew no fear. With his men he was gentle as a woman and as brave as a lion.”

He was a generous, noble-hearted man, and history will record the fact that Lot Smith was one of the notable figures of the past.”