Transcribed by Philip A. Wasden. Phil is the grandson of James Brooks Wasden and Tilda Christena Christensen. 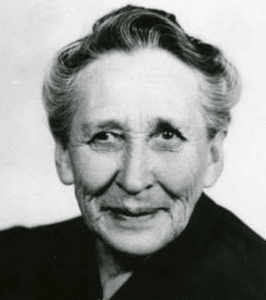 The following are some of the incidents that Tilda related in her own words of her early life:

“I was born in Fort Gunnison, Sanpete County, Utah, the daughter of John and Christena Christensen, at two p.m. on Saturday, January 21, 1871. The Fort had been built as protection against the indians. However, the raids were diminishing, and at this time, the people were building on lots further east that had been surveyed for a town. Father’s lots were a mile from the Fort, located on Main Street, and had been planted to crops in the summer of 1870. On this Saturday morning, Mother went up to the town lots, got a sack of corn for the pigs, came home, scrubbed the floors, cleaned the house, and was ready for the event at two o’clock.

“Father built a rock house on the town lots in 1872 and it was my home until I was married.

“My first recollection of anything sad happening was the sickness and death of my oldest sister, Caroline Josephine, who was eight years older than I. She had typhoid fever, was sick for three weeks and passed away in October 1877.

“I was baptized in the Sanpitch River by my father on June 2, 1879. At that time, Fast Day was held on the first Thursday of the month, so Elder Hansen, father of my friend, Maria, confirmed me on June 5.

“Travel was by ox team. In the winter time, father would hitch the ox team to the sleigh, place heated rocks or adobe bricks and straw in the bottom, and with heavy quilts over us, we’d be ready for the seven mile ride to Mayfield to visit mother’s particular friend on December 1st, or First Day of Winter, as they called it.

“It was the job of my sister Emma and me to gather the eggs, take care of the chickens, and herd the cows. When feed was short, we drive the cows above town to graze on the brush. If they did not come home, it was up to us to go find them. In the fall, after the grain was harvested, we took the cows to the farm to herd. The nearest farm father owned was a mile from home, so we took our lunch and stayed for the day. We had to keep our cows on our own land and, as there were no fences, we were kept quite busy. We used to tell our younger sister Hannah about the good times we had. We told her that we had a way of getting to the farm without walking. When we started out in the morning, a car would meet us at the bottom of the hill. (We called it a car.) It had a platform and wheels. The cows would step on and away we would go to the farm, and at night it would bring us back. Hannah would watch for us at night, but we would always get the cows into the corral before she saw us. Finally, she got permission to go with us one day and of course, there was no car. We told her the car would not come if anybody was with us and that she was the cause of us having to walk. This was about 1879 and we had never heard of such a thing as a car or any vehicle going without horses or oxen to pull it. We did have imagination!

“At the age of four, I attended my first school. It was held in a neighbor’s home. A peddler came through Gunnison and Mother bought a book from him. It was a first reader, which I took to school and everybody used it. It was the only book in that school. At school, we had to furnish our own books and slates to write on. Sometimes we would get some brown wrapping paper and make it into books to draw maps on and to write some of the things we wished to keep. In addition, we had to pay tuition. The older children usually went in the wintertime after the farm work was done. Then in the spring when farm work started again, the younger children would to school. Often the teacher was crowded for time and would ask me to take the ‘chart class.’

“In the fall of 1890, my sister Minnie, brother John and I decided to go to school and made arrangements to go to the Sanpete Stake Academy at Ephraim. It was later known as Snow College. Minnie and John stayed until April Conference, but I stayed until school was out in May. I went to Provo to summer school, and then taught in Mayfield from January until June. I had all grades from beginners to Fifth Readers.”

“The amusements were mostly dancing. A dance was held every other Friday night. Sometimes a play would be staged to get finances to carry on. I think two winters the ‘Home Dramatic Club’ put on a play every other Friday night, alternating with the dances. It was the custom, in those days, to have an escort to the dances. A girl never thought of going to a dance without a partner. Sometimes a boy would take two or three girls to a dance and then each girl would dance with anyone who asked her. We were only allowed a certain number of round dances. The rest were quadrilles. Dances started at 7:00 p.m. and closed at midnight. We always had a good time.

“The pioneer homes had to be self sufficient, not only in providing food but clothing as well. I never crocheted or knit a lot, but one summer my sister Emma and I had as our job herding cows on the hills outside Gunnison, so we took our knitting along like a couple of old ladies. I made several pairs of socks for brother John and several pairs of long hose for myself. Our hose all came well above the knee. We also made our own yarn. We washed and cleaned the wool and took it to people in Manti, fifteen miles away, who made it into rolls about two feet long. Then Mother spun the rolls into the yarn we used or into finer thread to be woven into cloth, the commonest being called ‘linsey’. Mother had a large spinning wheel at which one had to stand and walk back and forth to operate. She used this one a great deal. She also had a small one she used on smaller amounts of yarn. It took so many knots to make a hank and then the yarn was washed and dyed. Some dyes were bought, but local material, such as the bloom of rabbit brush for yellow, was sought out and used. Then it was ready for knitting or, if for weaving, it was taken to a neighbor, Mrs. Harris, who had a loom and did much weaving. My most beautiful dress came from her loom. It was woven, one thread of red, and one thread of black, giving a small striped appearance that went around the dress. Mother brought the cloth home and I thought it was beautiful I liked it so much that she made my dress. She had no sewing machine, so it was all done by hand. I loved the dress and was so proud of it. It was my very best dress.

“Another job for the younger children in those early days was to glean the fields. The grain was cut with a cradle and bound by hand. The children gathered the stray heads that had been missed, putting them into sacks. All the grain was then taken to a threshing floor to be flailed out and winnowed.”

In 1887, Tilda obtained her parents’ consent to go to Salt Lake City to do house work where three of her sisters were already working. The wage of $2.50 a week offered there seemed high compared with the local wage of one dollar. In addition to the regular housework at Gunnison, one was also expected to do the washing and ironing and any outside work that needed doing. Her brother John took her to Juab, some twenty-five miles distant, to take the train for the city. Altogether, she spent several years in Salt Lake, doing housework for various families. The wages seem to have come up some, as entries in a ledger after 1890 indicate a weekly wage of $3.50. There are entries indicating that money was sent home in $5.00 amounts and gifts were sent to a brother who was on a mission in Sweden. Here are some expenditures, evidently in 1893: March 15, dress, $2.80; April 8, oranges, 20¢; April 22, hat, $3.50. Stockings were listed from 20¢ to 35¢; a pair of gloves, $1.00; waist, 55¢ and corset cover, 75¢. There are entries for bananas for 10¢ and 40¢. Even in those day’s weight seemed to be important to women. On one page is recorded Tilda’s weight: June 6, 1891, 139 pounds. From there, it fluctuated down to 125 pounds in July 1896 and to a high of 143 lbs. on April 5, 1897.

The lives of those early settlers in Utah were centered completely in their religion. It dominated all their activities. Throughout Tilda’s life, from childhood on, the doctrines and teachings of the Latter-Day Saints were the impelling force to action. There was scarcely a time in her long life that she did not hold one or more offices in the various organizations of the Church. Before she reached her teens, she was Secretary in the Children’s Primary. She served in the Sunday School, Relief Society, Primary and Mutual, variously as teacher, President, Secretary or in any capacity where she was needed. At the age of 88, she had a perfect attendance record in her Ward Relief Society. She was always ready and willing to give of her time and talent to help those who were sick and distressed. After moving to Wyoming, she assisted in some fifty births, many of them without the help of a doctor.

On March 9, 1898, she became the wife of James B. Wasden at Manti, Utah. He left a week later for a two-year mission for the Church in the Southern States. She supported herself, during that time, with work at the L.D.S. Temple at Manti, where she had spent the two previous years. With what she was able to earn, the help of family and some minor contributions from friends, the mission was financed. The only money borrowed was for James’ return railroad fare.

Upon his return, they began the making of a home at Gunnison where their three oldest children, David John, Sofe Christine, and Brooks Fulton were born: In the winter of 1904-1905, they moved to Wyoming, settling at Penrose the next spring. Here four more children were born: Minnie Arrilla, Elna Tilda, James Orvil, and Lucinda.

Tilda always cooperated and tried to carry her full share of the load in raising the family of seven children. The first summer in the new home at Penrose, she was alone with the children while James was working in Yellowstone Park. There were other times when it was necessary for James to work away from home to provide for the family and Tilda had the responsibility of the home. The problems and aspirations of these two people were of mutual concern throughout their long life together.

In early May of 1954, she suffered a severe fall on the ice covered steps of her home. She was a long time recovering from this accident, and it was a contributing factor in the decision to sell the farm and move to Lovell where she was closer to medical help. In January 1962, she suffered a stroke, and while she recovered speech and mobility, her strength was greatly depleted. She passed away on the morning of July 3, 1962.