Builders of the Tabernacles in Provo came from widely diverse backgrounds—but they were drawn together in a common cause that fired them with spiritual devotion and the perseverance necessary to achieve their objectives.

In the group were early-day Mormons who had known the prophet joseph smith and remembered well the persecutions of Missouri and Illinois, all of which were capped by the tragic martyrdom of their prophet and his brother Hyrum, June 27, 1844, at Carthage. There were young people born to a destiny of pioneering a new state; converts from the Scandinavian countries and the British Isles; and Saints from states in the East, South and Midwest, who had answered the call to “gather” in the Mormon Zion in the Rocky Mountains.

Shortly after reaching Salt Lake Valley, the first settlers began to examine the regions surrounding their encampment. Apostle Orson Pratt is said to have been the first of the pioneers to gaze upon Utah Lake to the south.1  Although cautious about moving into Utah Valley because of the Indians, the Mormons learned considerable about the area in the next 20 months. One exploration party was sent by the First Presidency in early January 1849 to assess the valley’s “capabilities for a stock range” and seek out suitable places on Utah Lake for fishing and possible locations for fisheries.2

Meantime, the first battle between Mormons and Indians in what was to become the Territory of Utah took place that winter near the foothills above the present city of Pleasant Grove. A company of 30 or 40 men under Captain John Scott left Salt Lake, Feb. 28, 1849, and engaged a band of predatory Indians who had been stealing and killing the settlers’ cattle and horses. Scott’s men had first parlayed with Little Chief and his Timpanogos Utes at the Provo River.  Little Chief freely told the Mormons where the renegades were camped and sent his sons with them as guides. Four red men were slain in the skirmish which ensued after leaders of the Indian band refused to surrender and opened fire.3  The stream on which the action took place was named “Battle Creek.”

Although the Battle Creek fight undoubtedly strained Mormon-Indian relations it did not deter colonization plans. At a Council meeting at the house of Heber C. Kimball, Mar. 10, 1849, President Young presiding, “it was voted that a colony of thirty men settle in Utah Valley this spring for the purpose of farming and fishing and of instructing the Indians in cultivating the earth and of teaching them civilization.”4

On Mar. 13, at a meeting in President Young’s office, John S. Higbee was chosen president and bishop of the “Provo Branch” of the Church, with Isaac Higbee, as first counselor and Dimick B. Huntington, second counselor.5 The names of 33 men “who were going to settle in Utah Valley” were read at a Council meeting Mar. 17, 1849, in Great Salt City.6

Church records make no mention of the date that the colonizing party left, nor when they reached the banks of the Timpanogos (Provo) River. Allowing time (from the Mar. 17 meeting) for them to outfit wagons; assemble livestock, farm implements and seeds; arrange personal affairs; and three days for travel, Apr. 1 would seem a plausible arrival time.

Two days after their arrival, the settlers began to build Fort Utah for protection against the Indians. Finished in about six weeks, the fort consisted of log cabins in rows with posts 12 to 14 feet high picketed in between.

Later a 30-foot-square bastion was constructed of heavy posts on a natural mound in the enclosure. A six-pounder iron cannon was placed on the platform which was sufficiently elevated to protect the fort and stockyards from attack—something which was “considered liable to occur at any time.”7

Fort Utah was believed to have been located south of Provo River about 300 feet east of the present Geneva Road, approximately a block and a half north of Center Street.8

pioneer–Indian relations worsened in the late months of 1849. The natives, although friendly much of the time, often turned insolent and threatening. As the months passed, tension mounted. On the one hand, there was an unwarranted slaying of an Indian by three whites; on the other, the Utes accelerated their theft of livestock and other property, fired shots at the settlers and threatened warfare against them. Ultimately, the situation led to military action against the Indians early in 1850.

Early in 1850 Brigham Young in consultation with others determined to lay out a city in Utah Valley to be called Provo. Accordingly another group of colonists was sent by Brother Brigham to Fort Utah to reinforce the original settlers and assist in founding Provo.9 The site decided upon for the new city was two miles to the east on higher ground. The colonists’ first efforts were exerted in constructing a new fort on the land now known as North Park (500 North 500 West). (See Pioneer, vol. 57, no. 4 for details concerning the sup pioneer village presently at that location.) 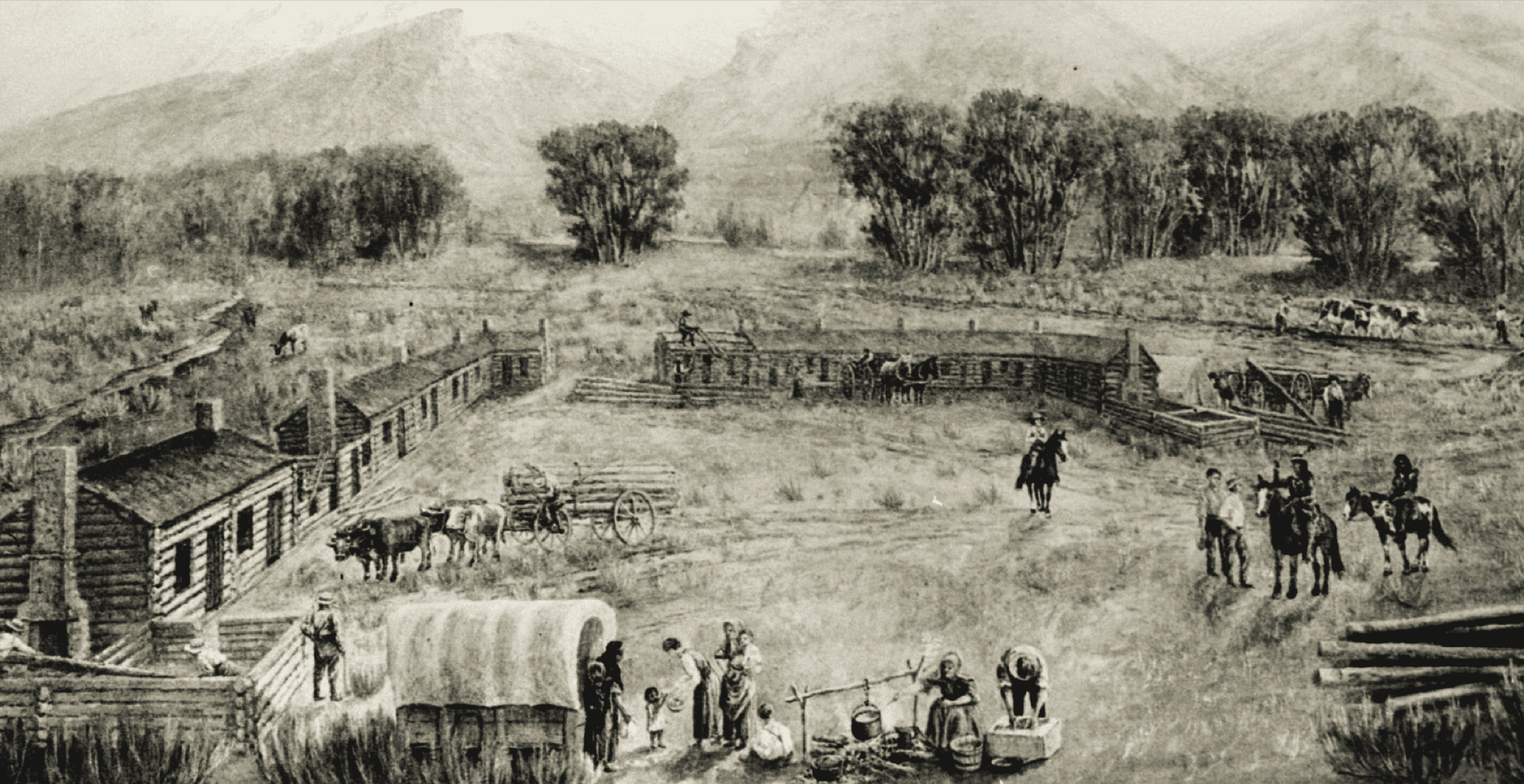 In the middle of the fort was erected a large building 50 feet in length which served as the principal meeting place, a schoolhouse, and recreation center. This building was the predecessor to the two Provo tabernacles described in this issue of Pioneer. As the pioneer civilization began to spread across the city plat and fan out to the farming areas, religious services were held in boweries, private homes, early-day schools and ward buildings.

Formation of Stake in Utah County

Utah Stake (called Provo Stake at first), the third stake of the Christ of Latter-day Saints formed in Utah, encompassed all of Utah County for 50 years and even reached into the present Wasatch County for a while.10

President Brigham Young presided over the formation of the stake on Mar. 19, 1851, at a meetinghouse within the second fort.

It was not until 1901 that another stake was formed in Utah County. Under the direction of the various stake leaders through the years, the pioneer-era Provo meetinghouse, often called the Old Tabernacle, was built. In the years following this, one of the gems of the Church, the provo tabernacle, was built as the Utah Stake Tabernacle.

This article originally appeared in Vol. 58 No. 2 issue of Pioneer Magazine (2011)

8 Composite information from several historians and from interviews with long-time residents of the area.