The largest pioneer celebration in America takes place in the weeks leading up to July 24th in Salt Lake City, Utah. This massive celebration commemorates the arrival of Brigham Young and his vanguard of what would become some 60-80,000 pioneers crossing the plains to establish an intermountain empire of over 400 settlements. This pioneer celebration today is called “The Days of’47.” For much of its history, the sons of utah pioneers have played an integral role in these festivities.
Tuesday, July 24th, 1849, two years after entering the valley, the first recorded pioneer day Celebration in the Great Basin took place, according to the Journal History of the Church. (See President Nephi L. Morris, Pioneer, June 1936,1). 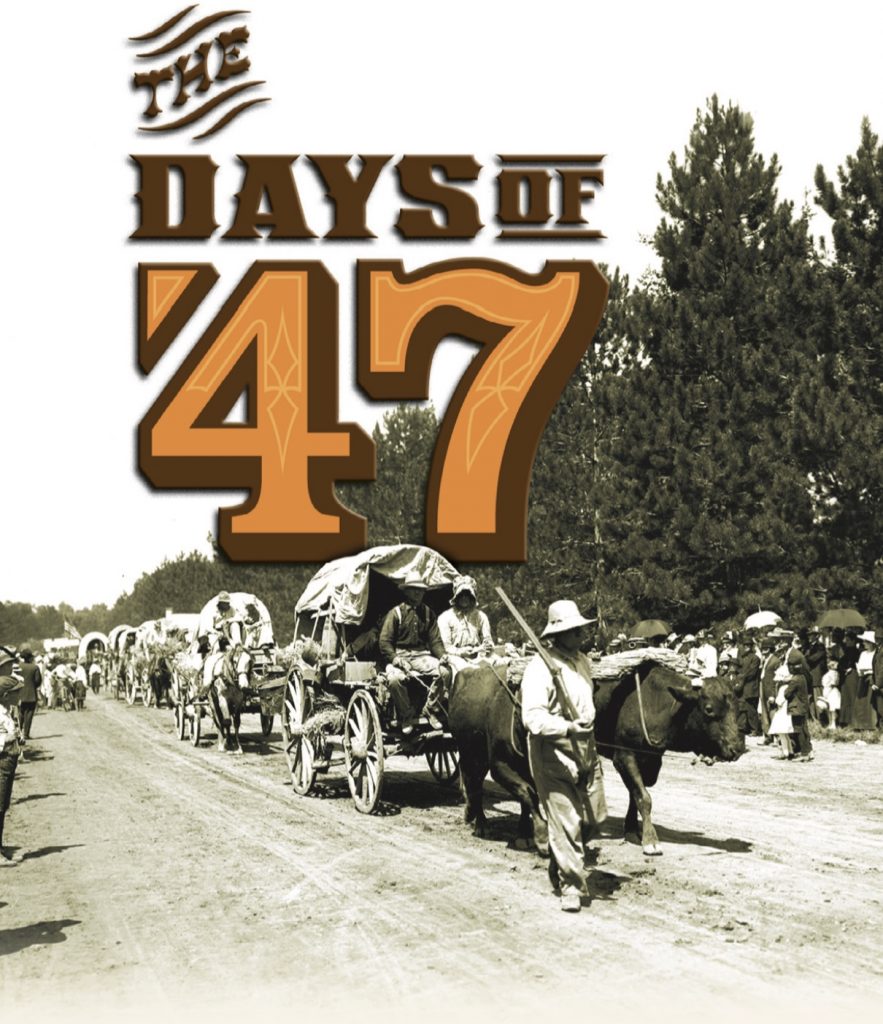 On July 23, 1857, 2,587 persons in 464 carriages and wagons traveled up Big Cottonwood Canyon to Brighton and celebrated the first statewide pioneer celebration. It consisted of singing, athletic events, talks, militia drills, music (six brass bands), and “banging” (discharge of small arms and a large brass howitzer). American flags were planted on the two highest peaks and at President Brigham Youngs camp. About noon on July 24th, Porter Rockwell and three others rode into camp with distressing news that Johnstons Army was marching toward the Great Basin.1
At the 1880 pioneer celebration, 33 years had passed since the Saints entered the valley. The population had jumped from 450 original settlers to 143,690. The pioneer parade was a mammoth procession, three miles long, to showcase Utah’s growth through a third of a century. Leading the Grand Parade were the surviving pioneers seated in decorated carriages, followed by fully a dozen brass bands from Salt Lake and adjacent settlements.2
On July 23,1936, at 6:30 a.m., a Sunrise Service was conducted at the proposed site of a new imposing pioneer monument near the mouth of Emigration Canyon, to be called “This Is the place.” LDS President David O. McKay announced plans for the impressive monument to be built and unveiled at the 1847 Centennial celebration.3
In May 1940, the SUP Salt Lake Chapter President George A. Parry was closely associated with the leaders of the Salt Lake Chamber of Commerce. He was responsible for his SUP chapter’s becoming a managing force behind the 24th of July celebration, known as “Covered Wagon Days.”
During the year 1943, the Sons of Utah Pioneers Luncheon Club was formally invited by the Bureau of Publicity and the Salt Lake Chamber of Commerce to provide the leadership for the Covered Wagon Days Celebration.4 Former SUP President Gaylen S. Young, an attorney, who had earlier incorporated the SUP Luncheon Club, helped incorporate the nonprofit entity “The Days of’47 Inc.”5 With the support of the governor, the mayor, and the LDS church President, The Days of’47 Inc. was “composed principally of the Sons and Daughters of Utah Pioneers.”6 SUP President Thomas B. Child became the first president of The Days of ’47 Inc, with DUP President Kate B. Carter as associate president.
The 1943 Days of’47 Celebration, under SUP and DUP leadership, was a grand success. It included crowning the royalty by Governor Maw on the Capitol steps, a Tabernacle Choir/Symphony concert in the Salt Lake Tabernacle, a Coronation Ball, four days of street shows, a Sunrise Service at Lindsay Gardens, and Leo Cramer’s famous Rodeo at the Fair Park.7
Under the leadership of the Sons and Daughters of Utah Pioneers, the Days of’47 Board combined with over 100 business, government, and church leaders to plan the 100th Anniversary of the pioneer’s entrance into the valley.8 The Centennial Celebration included Crawford Gates’s The Promised Talley, written for the occasion and performed on a four-level stage.9 The Tabernacle Choir performed, Gene Autry and his horse, Champion, were featured at the rodeo held at the Salt Lake Fair Grounds, and the parade featured 19 floats from the original 19 wards. A pageant was held at the University of Utah Stadium and SUP supported the “Every man in Utah will grow a Centennial beard.”10
The Days of ’47 included 16 types of entertainment—each recalling events in the daily lives of the pioneers. Square dancing was introduced in 1951. Queen contestants had to be descendants from pioneers. Eugene Jelesnick started a Pops Concert, featuring popular performing stars, which became the opening event of the annual celebration. The Sunrise Service in the Tabernacle was called “A Pioneer Miracle”; downtown activities included “High Noon Hilarities,” a rodeo, youth parade, and the Grand Parade.
The Days of ’47 sponsored Piute Indian tribal dances, in conjunction with the “old-Fashioned Family Celebration” at Pioneer Park in Salt Lake—the site of the original pioneer fort. In 1961, the horse parade became an official part of the Days of’47. That year, the six surviving immigrant pioneers (one man and five women) were honored at a luncheon.11 During this period, 12 of the 26 directors of the Days of ’47 Inc. were members of the SUP.12
In 1970 the Deseret News Marathon was added, generally following the route the pioneers took in entering the valley.13 The Grand Parade was ranked near the top of all American parades. In 1977, Jay Dunyon (the SUP president-elect became president of the Days of ’47. Emma Olsen (the DUP president) became associate president of the Days of’47.14
Today, the leadership of The Days of ’47 Inc. is no longer dominated by the Sons and Daughters of Utah Pioneers. Officers of both organizations, however, continue to serve on the Days of ’47 Board. The Queen Contest is under the direction of the Daughters of Utah Pioneers and the Sunrise Service is provided by the Salt Lake Pioneer Chapter of the Sons of Utah Pioneers. SUP traditionally has an impressive entry near the front of the Grand Parade, and the presidents of both the SUP and DUP ride with their spouses in the Grand Parade and with grandchildren in the children’s parade.
In 2006 and 2007, SUP chapters in the Salt Lake area continued to provide significant assistance in several Days of’47 events. Chapter members distributed tens of thousands of Days of’47 brochures, conducted the traditional Sunrise Service, and provided volunteers at the Family Fun Day. In addition, the past National SUP Presidents and their wives judged the parade floats to determine the entry that best depicted traditional pioneer values and then presented the creators of the winning float with a plaque. In 2007, the Sons of Utah Pioneers provided an impressive parade entry involving 17 American flags, five handcarts, and a Conastoga Wagon carrying an elderly man whose father was an actual pioneer who crossed the plains.