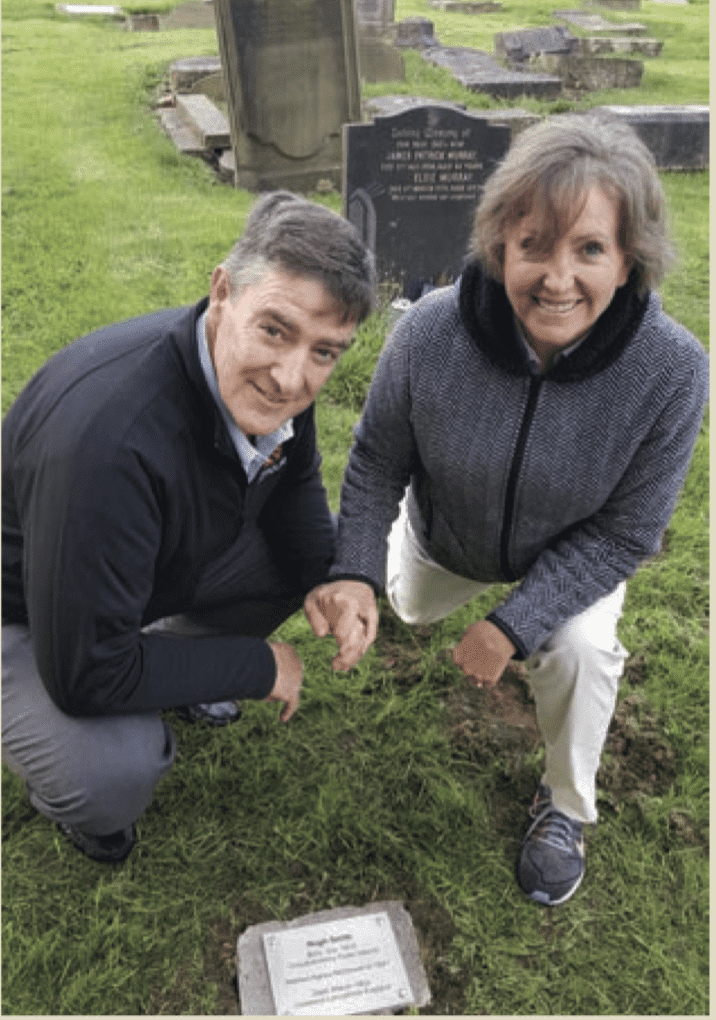 Last year my wife Kathy and I visited the british isles, where I had served my mission in Scotland and Northern Ireland. We traced the genesis of the Church in Great Britain during our travels and visited the area in northern England where some of my wife’s ancestors lived when they received the gospel. Hugh Smith and Agnes McDowell Smith were Irish, but they left the”Emerald Isle” because of the potato famines of 1840,1845, and 1846. Hugh was a journeyman carpenter-joiner who worked in shipbuilding, so he and Agnes settled their young family near the port city of Liverpool in northern England.Through the ministering of Orson Pratt, Edmund Saunders, and Milo Andrews, the Smiths joined The Church of Jesus Christ of Latter-day Saints in 1849.

Over the next seventeen years the Smiths moved between Liverpool and Belfast, Northern Ireland, several times, and their family grew to ten living children by 1862. In that year their second son, eighteen-year-old Joseph, emigrated to Salt Lake City, and the rest of the family continued to save and make plans to come later. In the meantime, Hugh established a carpentry shop and began to prosper. His sons were learning their father’s valuable trade.

Trouble began when Hugh left the Church and became opposed to leaving Great Britain. Agnes was determined that the family should emigrate and enlisted her eldest son, William John, to help her prepare by secretly putting away money and goods that would be necessary for the journey. William later wrote,”My father … discovered our hiding place, had me arrested, placed in jail, and taken before the magistrate.” Agnes told her husband he could put the whole family in jail, but when they got out, they would still leave for Zion. William continued,”I was soon set free, and father repented of what he had done and promised to follow in the next ship.This, however, he never did”(Andrew Jenson, Latter-day Saint Biographical Encyclopedia, vol. 1,472).

On April 30,1866, Agnes McDowell Smith kissed her husband as he left for work, packed her belongings, and with nine children at her side she boarded the three-masted ship John M. Bright, bound for America (along with B. H. Roberts, who wrote extensively about the journey). Just before the ship set sail, sixteen-year-old Hyrum slipped ashore and returned to his father. Hyrum later wrote that when he returned home that night, he found his father sobbing.

Upon arriving at Castle Garden in New York City, the Smith family found that all the passenger trains were being used to transport soldiers to the Civil War front.The family traveled to Nebraska in a freight train cattle car.

At the outfitting post south of Omaha, Agnes and her family joined the 1866 Thomas E. Ricks Company, a mule train, to cross the plains to Utah. She and her brood helped settle Randolph, Utah. She wrote to her husband and begged him to come to Zion, offering to send money for the journey. Hugh wrote back on the unopened envelope, “We will meet on that beautiful shore, but never on this earth.”

Hugh Smith and his son Hyrum remained in England for the rest of their lives.Their graves are about fifty yards apart in the West Derby Cemetery in the suburbs of Liverpool. The graves were located by Kay and Jaci Smith, my wife’s uncle and aunt, when they visited there.

During our travel last year, we visited the Benbow farm, John Taylor’s homestead, and the Gadfield Elms Chapel, the first Latter-day Saint meetinghouse in all of Europe. You can read more about the significance of that historic chapel in this issue of Pioneer. We drove through the Lake District in northwest England and we walked on the Liverpool docks where most of the 55,000 British emigrants to Utah embarked for their voyage to America. But the most memorable event of our pilgrimage was when we visited the cemetery where Hugh and Hyrum Smith are buried. We placed markers to identify the gravesites and we dedicated their sacred resting places.

The British Saints who came to Utah were talented, fearless, hardworking people who sometimes made heartbreaking sacrifices that are still a blessing to us—their children—and will continue to bless generations yet unknown. I know you will enjoy this Pioneer issue about the early restored Church in the British Isles.