By Jerry Lackey (in the Pioneer Observer)

If the historians in our audience will recall, the full moon of September—which came to be known as the Comanche Moon—was a time of terror in the 1800s. 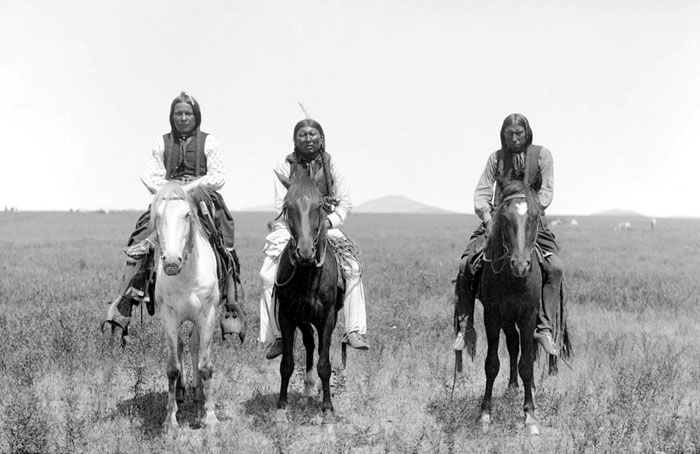 Around 1775, the Comanche Indians of northern Texas discovered that northern Mexico was becoming civilized. They turned their attention southward as a result. They were first interested in horses. Then it was slaves and cattle.

The Comanche raids were soon underway and continued to spell terror for 105 years. The year 1845 was the peak year when an estimated 10,000 head of livestock were killed.

What became known as the great Comanche War Trail crossed the Pecos at Horsehead Crossing. It stretched for 1,000 miles through Comanche Springs (at present-day Fort Stockton) through Persimmon Gap and flowed south in two branches east and west of the Chisos Mountains. The western branch crossed the Rio Grande at the ford at Lajitas, and went as far south at Durango.

When enemy shots came thick, the naked Comanche warrior would throw his body into this loop and ride against the horse’s side or even underneath him, keeping one heel on the horse’s back for support. In this position it is said he could shoot as straight as though he were sitting upright.

Even after the texas rangers adopted the Colt revolver in 1839 or 1840, the Comanches with their bows and arrows had few peers as fighting men on the plains. The Indians were scarcely less effective with their simple weapons than the Rangers were, even with their cap-and-ball rifles.

The Indian could loose a dozen or more arrows for every rifle shot, although from a shorter distance and perhaps with less accuracy.

The Comanches struck swiftly, looted, killed and quickly withdrew. They knew the land intimately too. And they were known to fight only when and where they chose.

Most times, however, the enemy was not surprised. In those instances the Comanches would attempt various ambushes, but they usually declined to make a concerted charge or to stand and take an enemy assault.

The Comanches were well-known for a circling expedient. Drawing closer and closer, the Comanche hoped the enemy would fire a volley from their guns. The Indians would then rush them before they could reload.

In the book Recollections of Early Texas, John Jenkins describes the encircling tactics of the Comanches as follows:

“It was a strange spectacle never to be forgotten, the wild, fantastic band as they stood in battle array, or swept around us with all strategy of Indian warfare. Twenty or thirty warriors mounted upon splendid horses, tried to ride around us, sixty or eighty yards distant, firing upon us as they went. It was a superstition among them, that if they could thus run around a force they could certainly vanquish it.”

Another interesting observation concerning the Comanche and his ability to steal was made in 1882 by Colonel Richard L Dodge. In his memoirs, Our Wild Indians, relating 33 years personal exprerience among the Indian of the Great West, Dodge wrote:

“Where all are such magnificent thieves, it is difficult to decide which of the Plains tribes deserves the palm for stealing. The Indians themselves give it to the Comanches, whose designation in the sign language is a backward, wriggling motion of the index finger, signifying a snake, and indicating the silent stealth of that tribe. For crawling into a camp, cutting hobbles and lariat ropes, and getting off undiscovered with the animals, they are unsurpassed and unsurpassable.”

In contrast, the Comanche would swoop down on a Texas ranch at night too, yelling and waving blankets to stampede the horses. It is easy to see why they became the terror of the plains.

They continued their plunder into the 1870s when federal troops from the scattered line of forts aided the Texas Rangers in subduing them. By 1875, the frontier was relatively safe for settlers.