The following article first appeared in Vol. 60 No.2 of Pioneer Magazine

During the ﬁrst years of his residence here, William Carter Staines engaged in various avocations. As an expert gardener, Staines not only cultivated fruits and ﬂowers upon his own pre 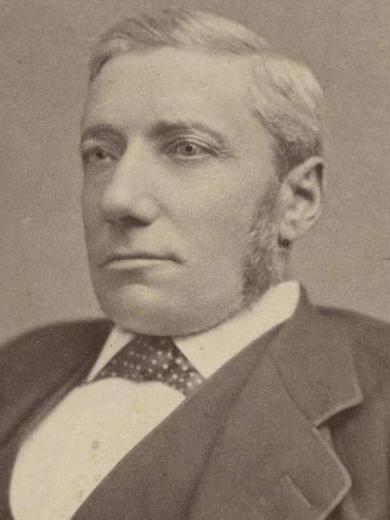 mises, but superintended at one time the gardens and orchards of President brigham young. He also had a farm of 300 acres in Davis County.

Staines was 36 years of age when he married Lillias Thompson Lyon on October 30, 1854, and began building his impressive home a block north of where the Utah Jazz play their basketball games. Negotiations for the settlement of the Utah War took place there between new Governor Alfred Cummings and replaced Governor Brigham Young. Sir Richard Burton, author of City of the Saints, was entertained there in 1860 and portrayed Staines as a Horatio Alger–like character, a poor man who became rich in America through effort.

Thomas L. Kane also spent time there. The home was later sold to William Jennings, Utah’s ﬁrst Mormon millionaire, owner of the Eagle Emporium on Main Street. Jennings made extensive additions to the home in the 1870s and named it Devereaux House, after the area of England where he grew up.

Staines’s connection with the Deseret Agricultural and Mining Society began when it was incorporated in January 1856. His interest and success in fruit culture is partly indicated by the fact that on one occasion, September 18, 1857, he had upon his table from his own orchards six kinds of peaches, some of them measuring nearly 10 inches in circumference; also grapes of his own raising.

As a purveyor of fruits and vegetables, Staines was well known in the city, and in 1857 was a partner with david candland in Candland’s saloon (restaurant) on Main Street, just south of the Council House.