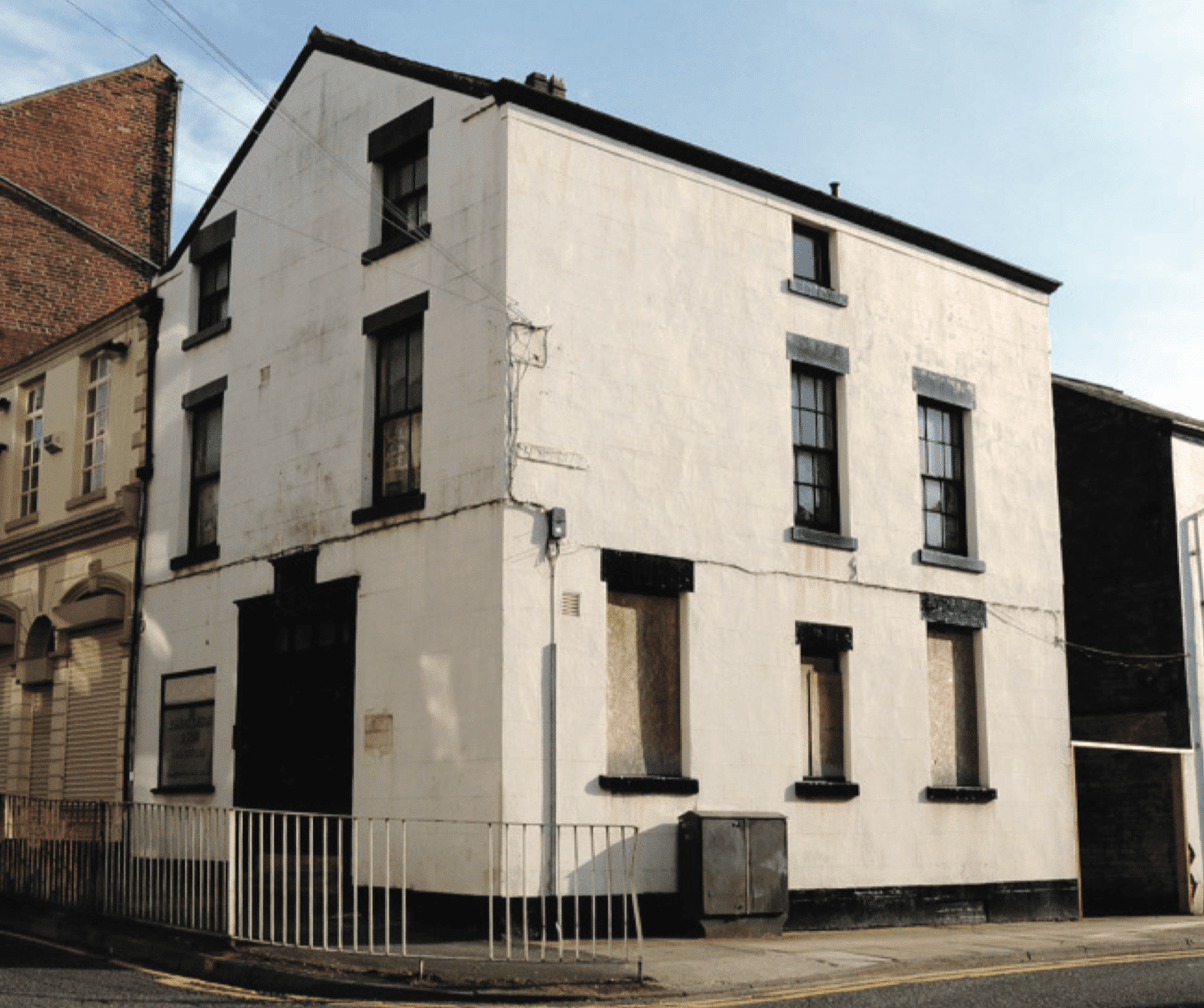 In 1837, Elders Heber C. Kimball, orson hyde, and others began work as the first missionaries of the LDS church in the British Isles. Their first field of labor was in Preston, Lancashire, England. Their lodging quarters were in a building located on the corner of Fox and St. Wilfred streets in Preston.

During the night before the first baptisms in Great Britain, the missionaries experienced a dramatic encounter with what Elder Kimball characterized as “the powers of darkness” and “evil spirits.” Seen in the image above is the building where that experience unfolded. To the left on Fox Street is the main entrance to the three story building. In 1837, the entrance was located in what is now an alley (seen in the shadow on the right) which is on St. Wilfred Street. That is likely the reason that this site is referred to as the St. Wilfred Street lodgings rather than the Fox Street lodgings. The building is presently (2010) privately owned and unoccupied.

On the morning of July 30, the day the first baptisms were to be performed, the missionaries were attacked by Satan and his hosts. Elder Russell came to Elder Kimball, seeking relief from the torment of evil spirits. As Elders Hyde and Kimball laid their hands on him to bless him, Elder Kimball was knocked senseless to the floor by an invisible power. As he regained consciousness, he saw his brethren praying for him.

“[Heber wrote:] ‘I then arose and sat up on the bed, when a vision was opened to our minds, and we could distinctly see the evil spirits, who foamed and gnashed their teeth at us. We gazed upon them about an hour and a half. . . . I shall never forget the vindictive malignity depicted on their countenances as they looked me in the eye; and any attempt to paint the scene which then presented itself, or portray their malice and enmity, would be vain.’ . . .

Years later, narrating the experience of that awful morning to the Prophet Joseph, Heber asked him . . . whether there was anything wrong with him that he should have such a manifestation.

“‘No, Brother Heber,’ he replied, ‘at that time you were nigh unto the Lord; there was only a veil between you and Him, but you could not see Him. When I heard of it, it gave me great joy, for I then knew that the work of God had taken root in that land. It was this that caused the devil to make a struggle to kill you.’

“. . . ‘The nearer a person approaches the Lord, a greater power will be manifested by the adversary to prevent the accomplishment of His purposes.’”