In recognition of significant contribution to the Sons of the Utah Pioneers, the Sugarhouse Chapter expresses thanks and appreciation to Horace A. Sorensen 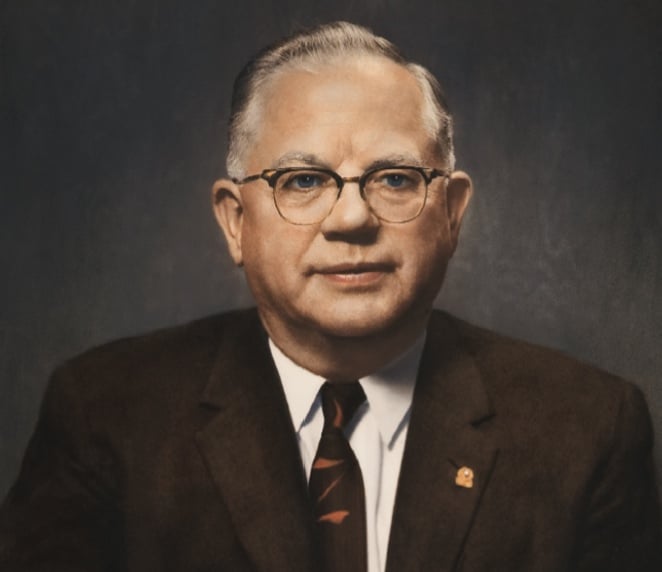 Horace August Sorensen (Feb 6, 1899 – May 2, 1977) served as National President of the Sons of Utah Pioneers during consecutive terms from 1954 through 1956. Under his leadership, membership grew from eleven to thirty-five chapters. He also served as President of the Sugarhouse Chapter during 1949 and 1950.

Horace performed a vital role in the construction of the National Headquarters facility, located at the mouth of Parley’s Canyon, by providing significant financial assistance. On October 31,1950, the Sorensen barn located at the family’s estate on Connor Street (Salt Lake City, Utah) was remodeled into a small museum dedicated by President George Albert Smith. This expanding collection was later donated to the Sons of the Utah Pioneers on November 6, 1953. The collection is housed at Lagoon (Farmington, Utah) and has grown into more than thirty buildings, homes, shops, etc.

The sale of Pioneer Village to Lagoon Corporation provided the initial funds toward construction of the sup Headquarters.

Horace was very prominent in converting the old penitentiary site into Sugarhouse Park where President Gordon B. Hinckley dedicated the SUP monument which was erected in June, 1988.

Railroad Village, begun by the Sons of Utah Pioneers at Corrine, Utah, to commemorate the Golden Spike 100th Anniversary in 1969, was spearheaded by Horace Sorensen.

The Chapter also extends appreciation to his wife, Ethel Melville Sorensen, and his family, who supported him in these endeavors.