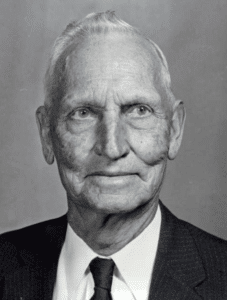 Hyrum Smith, 88, a patriarch with more than 61 years of service in The Church of Jesus Christ of Latter-day Saints, and a long-devoted member-at-large of the sons of utah pioneers, died Mar. 22 in a Salt Lake City hospital after a short illness. He was ordained a stake patriarch in Arizona at the age of 27 in 1910 and was serving in the same capacity in Wilford Stake at the time of his death.

He was a second cousin of the Prophet Joseph Smith and Hyrum Smith, first patriarch of the Church. He has been featured in numerous newspaper and magazine articles for his long service in so many stakes in Arizona, Canada and Utah.

Mr. Smith served nine years as bishop of the Lethbridge Ward in Canada and was a school teacher in Alberta, Canada, and in Snowflake and Heber, Arizona. While attending Brigham Young University, he was one of the organizers of the now famous Timpanogos Hike. He was a graduate of Arizona State Teachers College, now Northern Arizona University, where he graduated with honors.

While serving as a bishop in Canada, he also fulfilled a short-term mission to the Northwestern States in Oregon and British Columbia. After his return to Utah, he and his companion were called to be in charge of the Church farms at the Hill Cumorah. He also served as president of the Palmyra Branch.

During World War II he was a civil service personnel counselor at Hill Air Force Base. He also served for a number of years as a proof reader at the Deseret News Press and was an ordinance worker in the Salt Lake Temple for 12 years.