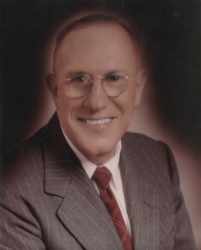 He was former President of the texas-louisiana mission of the LDS Church and the Wells Stake Mission. He had served in a bishopric and a stake high council. In business life he was a long-time state employee and a funeral director.

Mr.Smith was known best perhaps, as an all-time, all-state basketball star with the old lds high school and college teams. At six feet, six inches tall, he is believed to be the tallest man to play basketball for this school.