This article originally appeared in the Vol.60 No.2 issue of Pioneer Magazine

Patty Bartlett was born in Bethel, Maine, on February 4, 1795. When she was 17 years old she married David Sessions. David was born and raised in Vermont and had moved to Maine when he was 20 years old. David and Patty, known for their industry, purchased a farm and then a sawmill. Later they erected a gristmill and also ran a roadhouse. Patty also practiced midwifery, beginning soon after she was married.

In 1833 they met the Mormon missionaries and were later baptized into the Church. Soon after, they followed the counsel to “gather” and moved to be with the Saints in Missouri and later Nauvoo. They came west with the Saints and arrived in the Salt Lake Valley in September of 1847. All of this time, Patty was busy as a midwife. She delivered 248 babies in her ﬁrst year in the valley and nearly 4,000 thousand during her lifetime.

Patty was a skilled gardener and orchardist. She kept her family and neighbors well supplied with produce. 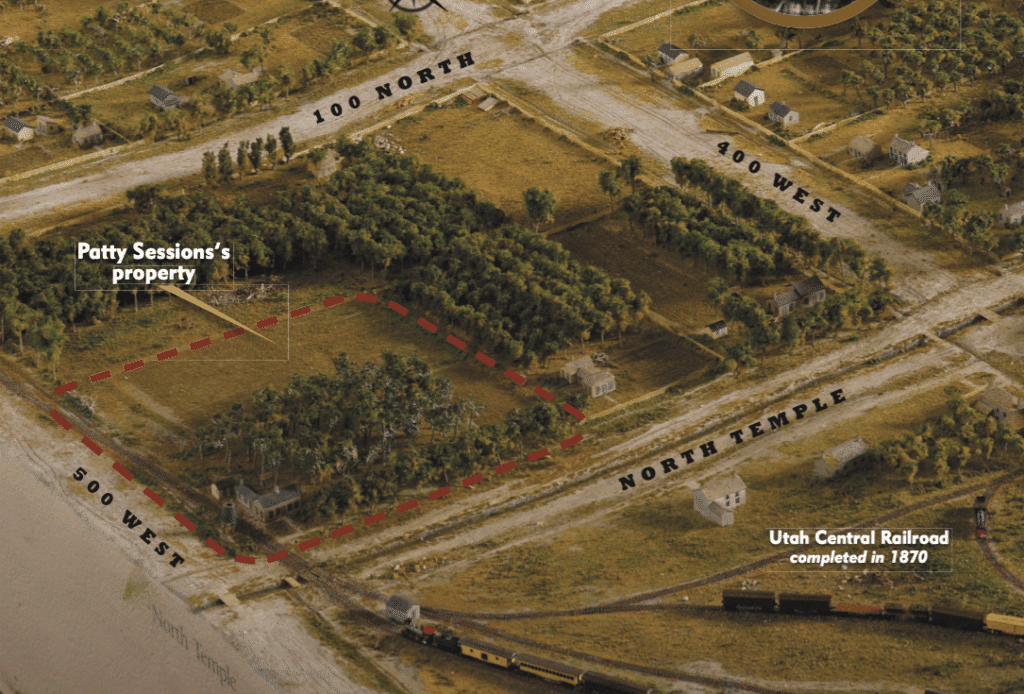 Gardening is mentioned frequently in her diary. The following comments about her gardening and excerpts from her diary are from Mormon Midwives by Clair Noall, Utah Historical Quarterly, Volume 10, 1942:

“Now we see her weighing her seed, which consisted of quantities of wheat, corn, and peas. She must have cherished these stores along the way, for nothing was more precious than the potential food supplies. With the exception of the sego bulb the soil of the valley yielded no food. Every shoot had to be coaxed from the ground. Since Mr. Sessions was often away with his herds, and on his farm about ten miles north of the Fort, Patty was her own gardener in the city a great deal of the time. The pride and love with which she cultivated her land can be understood only in terms of the priceless value of her crops.

“Although her medical work and her garden kept her busy both day and night throughout the years, Patty had time for many other activities. It is said that at one time she picked up one-hundred bushels of potatoes in a single day.

“Then into July, 1848; Patty was working so hard in her life-giving garden that she could not sleep. She weeded until her arms were lame, and watered whenever there was an opportunity.

“During the summer of 1848, there were plenty of green corn, cucumbers, and squash in the valley, which was a blessing, as the Mormon crickets had that spring devoured the ﬁrst crop of wheat.

“September 29, 1848: ‘Brigham [Young] and wife came here with her mother and his daughter and feasted on melons.’

“All of this occurred during her ﬁrst year in the valley. She obviously carried seeds across the plains in 1847, so that when spring broke in 1848 she could immediately go to work to prepare the ground and plant her garden. Subsequent years found her just as industrious where her gardening was concerned. In 1861, when she was 66 years old, she fell from her neighbor’s doorstep and sprained her ankle, and was lame for many weeks. Her son Perrigrine made her some crutches. With these to help, she ‘continued watering and weeding here garden.’ On Friday, September 13, 1861, she wrote, ‘I do not go to meeting; stay at home to watch my fruit to keep it from being stolen.’ Later that month she wrote, ‘I pared apples and strung them to dry.’

“Patty Sessions entered many accounts in a daybook, which shows that she made a good living from her gardens and her orchard. She is credited with developing a variety of plum, appropriately named the ‘Sessions Plum.’ Her lifetime covered nearly a century, for had she lived 53 more days she would have been 99 years old at the time of her death.”