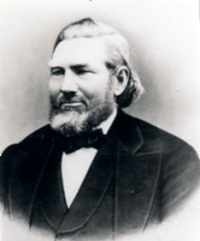 There are few men of Northern Utah who have had a more interesting and eventful history than samuel smith of Brigham City, Box Elder County. He is the son of Daniel W. Smith and Sarah Wooding. His parents were both members of the Mormon Church. His father was a High Priest and died at Nauvoo in the fiftieth year of his age. His mother came to Salt Lake City with one of the pioneer companies; she died at the age of 68 years.

Samuel Smith was born at Sherington, Buckinghamshire, England, May 22, 1818. When quite a boy he was employed in the Royal Matting Manufacturing where they made the matting on which the princes and princesses walked at the time of their coronation. He continued there a long time, and then engaged in other pursuits. At the age of 22 years he became foreman in a large oil-cloth establishment in London. Two years later he was employed as foreman in a mercantile house, and subsequently he became an importing merchant on his own account.

On October, the 12th, 1837, he was married to Miss Mary Ann Line at Hemel Hemstead Hertfordshire.

In 1841, he heard some of the elders of the Mormon Church preaching and expounding the doctrines of Mormonism. After attending their meetings and listening to them for some time he became convinced that the doctrines were true, according to the scriptures, and on December 26th of the same year he was baptized into the Mormon Church in Lindon by Elder lorenzo snow, the same who baptized his parents.

In 1842, Samuel Smith was ordained a Priest in the Church and commenced to preach the gospel in the capital of England. During his ministry there he had some very interesting experiences, among which he relates the following incidents:

“Some time after I had been ordained to the priesthood, my sister, Jane S. Terpin, was seized with cholera. Her case became critical, and she was soon struggling in the throes of death. Three ministers and two physicians were attending her. They all said the case was hopeless and that she would die. As soon as I heard of her condition I went immediately to her residence. I found my father there, and told him to clear the room of all strangers. He did so. I told him she would not die. I then took hold of her hand, and in the name of Jesus Christ I rebuked the cholera, and told her to arise which she did and was healed. I then bore testimony to them that the fullness of the gospel was restored, and that it was by the power of God that she was healed. In a subsequent interview with them – her husband and herself – they told me that they heard a voice speak to them and tell them that my testimony was true.”

On another occasion he was the means of averting much trouble and difficulty from the authorities of the church of London. He says:

“Apostle Parley P. Pratt and others of the apostles were in England in 1842; some of the elders acted very imprudently while preaching in London, in speaking in terms of severity and criticism on the British government. The report of their utterances reached the throne, and the Queen instructed the police authorities to institute inquiry into the matter. On the following Sunday officers were sent to the meetings of all the religious denominations in London. I was intimately acquainted with one of the magistrates in the borough, who informed me of the instructions given the officers. On the day named I was appointed to preach in the open air. An immense congregation had assembled to hear. I preached on the principles of the gospel which inculcates peace on earth good will to men, and sustaining and upholding the constituted authorities of all governments under which we live. The reporters discovered that the Mormons taught not treason but loyality to the throne, and so reported to those that sent them. Had the elders who had acted imprudently been present and preached as they intended on that occasion, they would have been arrested on charge of sedition.”

During his ministry in London, Elder Smith baptized a number of new members into the church.

Early in January, 1843, Samuel Smith with his parents and family went to Liverpool, and on the 15th of the same month they sailed from that port for America – their destination being Nauvoo, Illinois. They reached Nauvoo in the following April. Here he became acquainted with the Prophet Joseph Smith and the Patriarch Hyrum Smith, and most of the leading authorities of the Mormon Church.

In 1843, when the fifth quorum of seventies was organized, Samuel Smith was ordained and set apart as a member of that quorum by President Joseph Young, brother of President Brigham Young. The same year he was enrolled as second lieutenant-general. He continued to serve in that position until the year 1845 when he was appointed captain of the guard of a company of the legion who were sent to a settlement four miles south of Nauvoo known as Evans Settlement. Here they had to guard the people and the property day and night against the incursions of a ruthless, lawless mob who were constantly watching for an opportunity to steal cattle, destroy property and take the lives of the Mormon people.

Captain Samuel Smith remained with his family at Nauvoo, participating with the citizens in all of their persecutions and sufferings until after the fearful tragedy in which Joseph and Hyrum Smith were so cruelly murdered in Carthage Jail by a band of lawless ruffians into whose hands they had been betrayed by those who had plighted their faith to protect them.

In the notes furnished us by Mr. Smith, he says,

“In the year 1846, we were driven from our homes in Nauvoo, and compelled to cross the Mississippi River on ice. Many thousands of others suffered in the enforced exodus. We were in a destitute condition, having to fly and leave nearly all we possessed behind us. We stopped in Iowa where I took contracts that furnished members of my brothern with employment which enabled them to procure means necessary to continue their journey further into the interior where the body of the church had gone. My wife and three children had already gone forward to Mount Picgah where a large number of families were encamped with Elder Lorenzo Snow.

“At Mount Picgah, many of the Mormon people had become prostrated by hunger and fatigue. Sickness broke out and death made terrible inroads into the camp. Some of them died of destitution and starvation. The entire camp was without food. As soon as I heard of it, I started for that place with a wagonload of flour and bacon. When I reached the camp, I found my family sick and dying. Two of my children died, but with careful nursing, my wife and the other child were saved. I delivered the entire load of provisions to Elder Snow to distribute among the Saints and thus saved many from death by starvation. I then took my wife and child back with me to camp.”

While Mr. Smith remained back in Iowa, he had many rough experiences and narrow escapes from death at the hands of the mobs who threatened to kill him. On one occasion on Fox River, a mob collected to tar and feather him because he would not renounce Mormonism. Mr. Smith ascended a mound, drew a pistol to defend himself and told them that whoever advanced to tar and feather him would never live to do it. The bold and fearless front he thus assumed saved him. The mob retired and left him thereafter unmolested.

In the spring of 1850, he started with his family to travel west for the Rocky Mountains. The feelings of the anti-Mormons were bitter against him. The county authorities were under the necessity of calling out a body of the militia to guard him and his family from attacks until they reached the county lines.

After their escort left them they still experienced much annoyance, and were often in imminent danger until they reached the Missouri River where the Mormon people were organizing companies to cross the plains. They were assigned to travel in the company of Aaron Johnson. Here he was elected clerk of the company which consisted of about 100 wagons. They started on their journey in June.

The first deaths in the company occurred in Salt Creek where 18 died of cholera. On the Platte the cholera again broke out. Here Sam Smith says he saw a man standing by him in the night and said that the company should stop and clean themselves and their wagons thoroughly and be baptized and the cholera would leave them. The captain and the chaplain each stated that they had a similar vision. The company did as directed by the messenger and the blessing followed. The company had no more sickness and arrived in Salt Lake City in September 1850.

Early in April, 1855, he was called to go to Brigham City, Box Elder Co. Here he was appointed a counselor to President Lorenzo Snow. There he made a plan of Brigham City and the surrounding country which was examined and approved by the proper authorities. He assisted materially in surveying that part of the public domain.

This same year, Samuel Smith was appointed postmaster of Brigham City; a special agent of the postal department was sent to induce him if possible to give up Mormonism in which even they would give him a good position in the postal service. He told them his religion was dearer to him than anything else; besides that, he neither could nor would give them up for any earthly gain that could be offered.

Samuel Smith was very active in assisting in the developing of the resources of the county in making roads, building mills, laying out ditches, in fact every thing that pertained to the welfare of the Saints.

When it became necessary to organize the Militia, every able-bodied man in the district was enrolled and mustered into service. Samuel Smith was elected first major of cavalry, and was appointed the commander of the northern post. He commanded the citizen soldiers in that district in all the expeditions against the hostile Indians whom he did much to subdue and taught them that the Mormons were their friends.

In 1860 he was elected Probate Judge of Box Elder County which position he occupied many years.

During the building of the utah northern railroad, he was Superintendent of Construction and later one of the directors. The people also elected him mayor of Brigham City for a number of years.

When it was thought best by the leaders of the people to organize cooperative stores in place of the private concerns, Samuel Smith turned in his merchandise valued at $10,000. He later became one of the directors of the Brigham City Co-operation and also assistant superintendent.

Samuel Smith had a large family of five wives and fifty-one children. He was a conscientious servant of the people, ever devoted to their interests, He was a man who loved the Lord and His word, devoted to their servants of the Lord, willing if need be, to give his life in their defense.

Samuel Smith died at Smithfield, Cache County, October 2, 1896. The body was buried in the family lot in Brigham City Cemetery.