This biography originally appeared in Pioneer Magazine, 2010 Vol.57 No.3 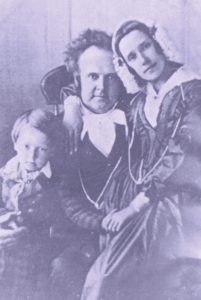 Jennetta was born on August 21, 1817, in Lancashire, England, to Reverend John and Ellen Richards. In 1837 Jennetta’s family was living in Walkerfold, England, where her father was a Protestant minister. On Wednesday, August 2nd of that year, she was paying a visit to friends in nearby Preston when she ran into Elders Heber C. Kimball and orson hyde. The following Friday, Jennetta was baptized by Elder Kimball in Preston’s River Ribble. After the baptism, Elder Kimball composed a letter to his fellow missionary willard richards, who was serving in another part of England. He wrote, “I baptized your wife today” (see Whitney, Life of Heber C. Kimball [1967], 143). Willard took him seriously.

Willard finished his mission in 1841, and arranged for Jennetta and Heber John to stay with relatives in Richmond, Massachusetts, while he set up a household in Nauvoo, Illinois. [He] departed Nauvoo on July 1, 1842, and returned with his family on November 21st.

Two years would pass. During that time there would be both bliss and horror. In June of 1844 Joseph Smith was martyred in the Carthage Jail. Her husband witnessed the death and was lucky to have escaped with his life. . . . Unexpectedly, Jennetta passed away three and a half months later on July 9th, 1845.  (See Mormon Insights by S. Faux.)

In the River Ribble Valley northeast of Preston, Lancashire, is the home that belonged to Reverend John Richards. His daughter, Jennetta, was one of the first in England to join the LDS church and the very first to be confirmed a member of the Church. For a time, early missionaries were allowed to preach in Reverend Richards’s chapel. But their success became a serious threat to him as he lost members of his flock. He could no longer allow the missionaries to preach there, but otherwise remained a friend.