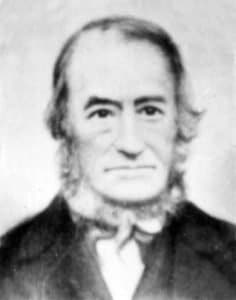 Richard Carlisle and Jane (or Jenney) Field were both born in England – Richard on 30 April 1798 in Riseholme, Lincolnshire and Jane on 18 November 1795 in Willingham, Lincolnshire. The couple was married on 27 June 1822. By 1840, just eighteen years later, twelve children had been born to them. Only six lived to maturity. One of these was Alice Carlisle, who married George Freestone, my great grandfather.

Richard was dissatisfied with the Church of England and investigated several others. He affiliated with the Quakers, but still kept searching. Eventually, the family sought out the Mormon missionaries and were converted and baptized.

Members of the family were baptized at various times in 1849 and 1850. Richard became the Presiding Elder of their branch. In 1851, on the “Good Ship Ellen,” they emigrated to America, except for their oldest son, Thomas, who came a year later. On their way up the Mississippi River, Jane died in St. Louis on 24 June 1851. She had done the washing for a woman afflicted with the dreaded cholera, so common among emigrants on that river. Jane caught the disease and died almost immediately.

It must have been very difficult for Richard to manage his large family during the years following Jane’s death. First he had to get the whole family across the Plains, then provide a home for them in a new land. The bereft father and his motherless brood stayed to work in St. Louis during the remainder of the first year. The youngest son, Richard, hired out to a Mormon family and came west with them, the first of his own family to arrive in the Valley. The oldest son, Thomas, had by then joined the rest of the family in St. Louis.

They were resourceful people and found work and homes with friends and other travelers. They came on to Utah in 1852 and settled in Mountainville (now Alpine), where Richard lived the remainder of his life. He received his temple ordinances in the Endowment House in 1854.

It was not until 27 April 1869, when Richard was turning seventy-one years old, that he married Marie Crook. Marie’s husband had also died of the cholera and the two shared a common loneliness. However, Marie wanted to be sealed to her first husband and Richard admired her faithfulness to him. So, according to the record, the two went to Brigham Young’s office and were married in a civil ceremony. Then the President performed the sealing of Richard and Jane — with Marie, no doubt, standing as proxy for Jane. Then he performed the sealing of Marie and her first husband — with Richard, no doubt, standing as proxy for him!

Richard Carlisle left word that when he died he wanted no costly marker on his grave – he desired that his good, honest life be his only monument. That kind of life he lived. And he died in Alpine, Utah on April 10, 1879, just before his eighty-first birthday.