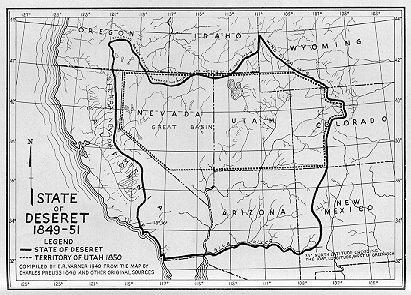 A Blessing in Disguise

Perhaps, in a church meeting you have heard a speaker tell of the huge size of the provisional State of Deseret.  In 1849, Dr. John M. Bemhisel, representing the Mormons in Washington, asked Congress to admit to the unionstate with boundaries as follows:

A check of the United States census figures for the years 1850, 1860, 1870 and 1880 show some rather interesting facts. The following chart gives the population figures for the area that is now Utah, where most of the Mormons lived; and in the other column the population for the district of Southern California, the states of Nevada and Arizona that were part of the proposed state of deseret.  The people living in those parts of Deseret were mostly non- Mormon.

The above figures do not include the areas of New Mexico, Colorado and Wyoming that were included in the proposed state of Deseret.  But, they are sufficient to lead one to the conclusion that in any election held before 1870, it is likely that all officials elected would have been Mormons.  Between 1870 and 1880, because by then there were many non-Mormons in Utah, elections in an area as large as the proposed state of Deseret would have been very close.

However, by 1880, the Saints would have been greatly outnumbered by the so called Gentiles.  Most of the non-Mormons lived in the Los Angeles – San Diego area of California and no figures are necessary to illustrate the fact that since 1880 the population of that area has grown much faster than has the population of Utah.

Would the proposed state of Deseret have been a blessing?  Brigham Young died in 1877, and after his death the enemies of the Mormons continually harassed them for almost two decades.

Congress passed laws against the practice of polygamy, the Edmunds Bill in 1882 and the Edmunds-Tucker Law of 1887.  Even the state department in 1879  (Evarts Folly) asked European countries to prevent Mormons from emigrating to Utah.

Elections were held between the People’s Party composed of Mormons and the Liberal Party made up of non-Mormons, not between Democrats and Republicans as in most states.

After 1880, in the proposed state of Deseret, the non-Mormons could have relocated.

Just as the desert area that the Saints settled and made “to blossom as a rose” was a blessing to them; even so the Lord gave them an unknown blessing when He failed to answer their prayers asking for statehood for the vast area of the proposed state of Deseret.