It is with a joyful heart this evening I write this message having just completed our last of three Annual Leadership Training meetings with our Area Vice Presidents and the leadership for each of our wonderful chapters. What a blessing it has been for us to be with each of you (virtually), and our hope is that next year we will be able to gather physically once again. I express on behalf of the National leadership team our gratitude for all that each of you are doing to keep our chapters closely knit together and moving forward to bless our members. If there were ever a time when we need to be there to support each other, this is that time.

I must reiterate the privilege it is to work with such outstanding men and women in my role as President. I am touched and honored to be listed among those who serve on the Executive Council, the Area Vice Presidents, the Headquarters staff, the Past President’s Council, the Chapter President’s Council, and each member of the Sons of Utah Pioneers. Thank you for blessing my life.

I cherish this time of year as we move towards the holidays of thanksgiving, then Christmas followed by a New Year. This is a very special time and season for the Sons of Utah Pioneers.

President Russell M. Nelson recently counseled us to examine our “foundation,” referencing the hymn “How Firm a Foundation“. This hymn has seven verses but typically we only focus on three. In reviewing them, two verses impressed me as I reflected on not only the difficulties of our age and times, but also of the blessings that are given in the promises of these verses.

For I am thy God and will still give thee aid.

I’ll strengthen thee, help thee, and cause thee to stand. Upheld by my righteous, omnipotent hand.

6 Even down to old age, all my people shall prove My sovereign, eternal, unchangeable love;

And then, when gray hair shall their temples adorn. Like lambs shall they still in my bosom be borne.

We have no need to fear and should focus more completely on those things for which we are thankful. High on that list for me is my family on both sides of the veil. Are they not part of that firm foundation on which we can rely? Let me share one of my favorite Thanksgiving stories: 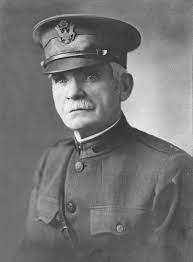 At the conclusion of World War I, Elder B. H. Roberts of the Seventy was serving as a chaplain in the United States Armed Forces. He was the only LDS Chaplain in his Division and was not well thought of by the other Chaplains. The peace treaty was signed on 11 November 1918. On Thanksgiving Day, the American soldiers gathered for a special Thanksgiving service.

The large attendance included many high-ranking military officers, and the services were conducted by the chaplains who were seated on the grandstand.

Elder Roberts was placed on one of the back rows. He had not been asked in advance to participate on the program, therefore, it was with great surprise that he heard the chaplain conducting announce that Elder Roberts, the Mormon chaplain from Utah, would now come forward and read the Thanksgiving Psalm in honor of this celebration.

He had never heard of the Thanksgiving Psalm! Concerned that he might embarrass himself and the Church, he slowly walked to the front, not knowing what he was going to say.

Some years later he shared his witness that during his walk to the front, he clearly heard a loud voice say “The 100th Psalm.” He said it was as distinct as though someone at his side had said it. Reaching the podium he paused, opened his Bible, and read Psalm 100:1-5.

1 Make a joyful noise unto the Lord, all ye lands.

2 Serve the Lord with gladness: come before his presence with singing.

3 Know ye that the Lord he is God: it is he that hath made us, and not we ourselves; we are his people, and the sheep of his pasture.

4 Enter into his gates with thanksgiving, and into his courts with praise: be thankful unto him, and bless his name.

5 For the Lord is good; his mercy is everlasting; and his truth endureth to all generations.

Closing his Bible, he returned to his seat and noticed that his fellow chaplains refused to look at him. It was then he realized that his part on the program had been a deliberate attempt to embarrass him, his Church, and his priesthood authority. He acknowledged the help he had received and upon returning to his tent he checked the Book of Psalms discovering that the 100th Psalm truly was the very best Psalm of Thanksgiving.

Reflecting on this experience do you wonder who spoke those words to Elder Roberts?

I firmly believe that as we remember those who prepared the way for us and have now passed on, they also more fully remember us. As we bless them, they bless us. And, as we complete their temple ordinances, we empower them to be available in those special times of need. The more we remember and serve, the larger the spiritual battalion for us and those we love.

From all of us here at the National Headquarters, we wish you the very best Thanksgiving.

Challenge: I hope you took last months challenge and found 2-3 stories regarding your father’s father to share with your family. I found several stories about Robert Orson Gibson which I will share with my children.

This month find 2-3 stories about your father’s mother that you want to share with your children. Write them and share them. ROBERTS, Brigham Henry WOODRUFF, Wilford: A man with no guile