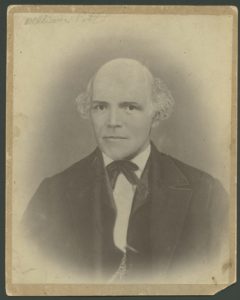 Born in Dymock, England, August 16, 1813, william pitt joined the Church in 1840. By 1842, he had moved to Nauvoo, Illinois. One evening in 1842, a group of 27 men assembled at the Nauvoo home of John W. Coolidge, greeting each other with warm handshakes and pleasant conversation. That evening they organized the nauvoo brass band, a musical group that would march its way west with the Saints five years later and be a spirit-sustainer in the early days of Western colonization.

William Pitt, a left-handed fiddler, flutist, clarinetist, and all-round musician, was selected as leader. (The band was also known as Pitt’s Brass Band for that reason, and as Joseph’s City Band because its primary purpose was to accompany the public drills of the Nauvoo Legion.) William was a logical choice for leader; a British convert, he had brought with him a large selection of music arranged for brass instruments which the group immediately began practicing, even though the instruments available were mostly “old fashioned and inconvenient for advanced playing,” according to Horace K. Whitney, a fifer in the band.

During the Mormons’ trek across Iowa in 1846, Pitt’s band not only helped to keep people happy with its music but also raised money by holding ticketed events in communities through which they passed.

Pitt was in the original group to go to the Salt Lake Valley with Brigham Young in 1847. In 1852, Pitt served as a missionary in England for the Church.