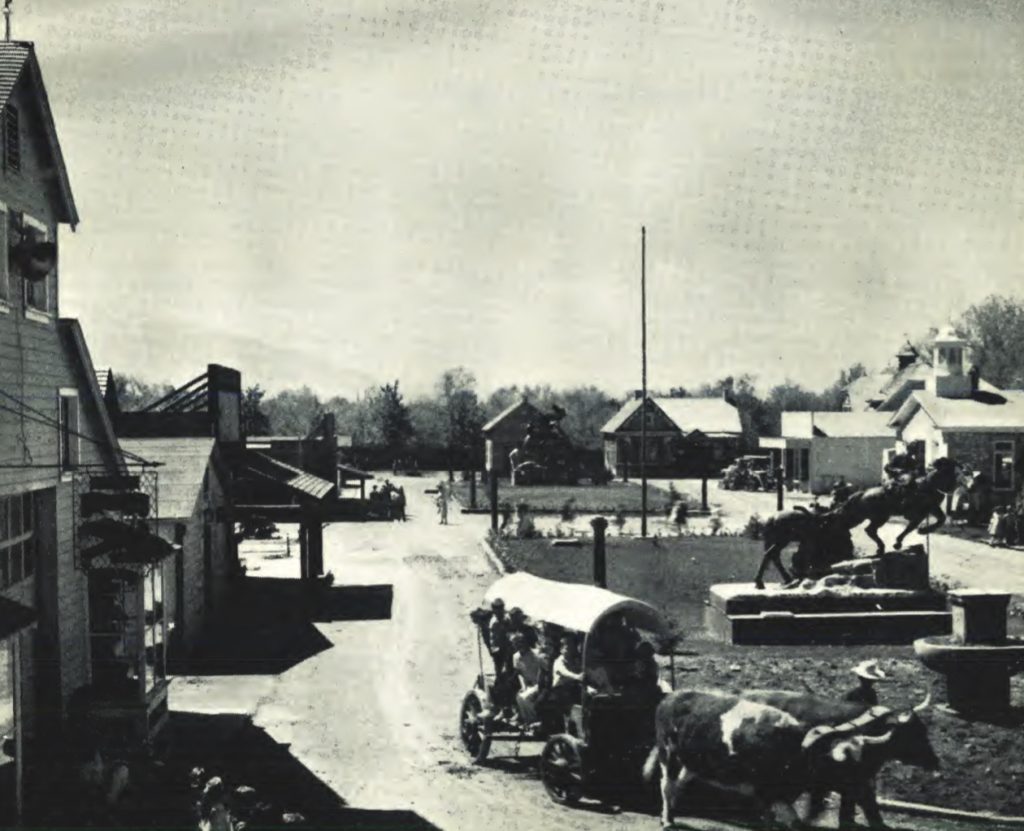 Utah’s pioneer village, an institution devoted to the procurement, care and display of objects of lasting interest and value, launched its 23rd season on April 1, with fairly good prospects of another record seven-months run at 2998 Connor Street in Salt Lake City.

From opening date until the close down on Oct. 31, the nationally-recognized museum will attract upward of 140,000 patrons from all over the United States and some foreign countries. The number of visitors who sign the register has increased without exception each season.

Recognitions received by Pioneer Village over its nearly a quarter of a century of operation include:

Story Of The Village

The fascinating story of Pioneer Village is told in the brochure each visitor receives as he begins the guided tour, and is briefed as follows:

“Time unfolds into Utah’s past as the visitor to Utah Pioneer Village turns his back on the 20th Century and steps into a country town of 50 to 100 years ago. Here is a center of living history which brings to life the way people lived during the first fifty years of Utah’s existence*

Originally the site of Pioneer Village was the pasture and show ring for a string of American Saddlebred horses. The main Museum building was the stable and the Round House was the winter training ring. During that time Mr. and Mrs. Horace A. Sorensen, the founders of Pioneer Village, acquired quite a collection of old coaches, wagons and other vehicles. Being in the retail furniture business they also obtained some beautiful pieces of antique furniture and household equipment.

When World War II made it almost impossible to hold horse shows, the Round House was converted into a small museum for the National Society Sons of Utah Pioneers and opened Oct 24, 1948. The project grew and the large barn was remodeled for the same purpose in 1954.

Every Kind of Shop

With the building of the Wanship Dam in the mountains east of Salt Lake City, the little pioneer village of Rockport was to be inundated. A request was made to preserve some of the old buildings erected in pioneer times, so Mr. Sorensen moved them into the pasture, and thus the museum grew into a Pioneer Village.

Additional old buildings were brought in, restored and furnished according to the period. Two old stores were acquired complete with counters, fixtures, and original stock which had been locked up for nearly twenty years. Included in the Village is practically every kind of shop and public building found in pioneer times.

In 1956, Mr. and Mrs. Sorensen deeded the entire collection and the property on which it is situated to the National Society Sons of Utah Pioneers. They, with the continued financial and technical assistance of Mr. Sorensen and others are adding to the Village each year.

It is not just a museum, but a village with activity. Daily the team of oxen, “Ben” and “Lars,” take hundreds of school children, tourists and visitors for a ride in a covered wagon. At the end of the ride the oxen kneel down and pray for the riders. They are the only known praying oxen in the world. There is also a small herd of buffalo, and teams of horses which are hitched to a wagon or an old coach on occasions.

Annually on “Pioneer Day,” July 24th, a number of wagons, buggies, handcarts or old coaches are entered in the big parade. Several times during the year, usually including Memorial Day and Labor Day, groups of Indians descend on Pioneer Village and perform their dances, demonstrate their crafts, and show their way of life.

The pioneer spirit which built the West is recaptured and preserved here, and a visit to Pioneer Village leaves one with a lasting impression of the westward movement and a deeper appreciation of our great American heritage.”

The executive staff of the Village: