Don H. Miles lives in Pleasant Grove, Utah, and works in the editorial department of the LDS Church.

“The bullet passed through the door about five feet or so above the floor. It struck Hyrum on the left side of his face, and it must have snapped his head to the right, because the main bloodstains on the shirt are on the right breast. He would have fallen back onto the floor, and his feet and legs probably curled up in front of him. Another bullet hit his left shin, and another hit him in the back of his right thigh.

“You can see easily how this could have happened if his legs had curled up a little in front of him as he fell back. Another bullet punctured the shirt on his chest and exited quickly, the two long holes being only a half inch or so apart. The bullet probably hit a rib or his sternum and ricocheted back out. That bullet lodged under Hyrum’s chin

“However none of these later bullet wounds caused any bleeding The only bloodstains are on the right front shoulder of the shirt. The shot to the face killed him, and his heart stopped, thus his blood pressure stopped; there are no bloodstains on the other holes in his clothes. This seems to indicate that these four bullets were shot after Hyrum’s heart had stopped. The clothing really tells the story.” – Eldred G. Smith

I must disagree with Eldred. The clothing shows the story, but he tells it, and he does so with an eloquence and conviction unmatched in any telling of the martyrdom I have ever heard.

Eldred G. Smith, patriarch to The Church of Jesus Christ of Latter-day Saints, is a great-great-grandson of hyrum smith and the custodian of a number of artifacts belonging to Hyrum Smith. These precious heirlooms were brought across the plains from Nauvoo, Illinois, to Salt Lake City, in the wagons of the family, carefully guarded and treasured by descendants of this LDS Church martyr. 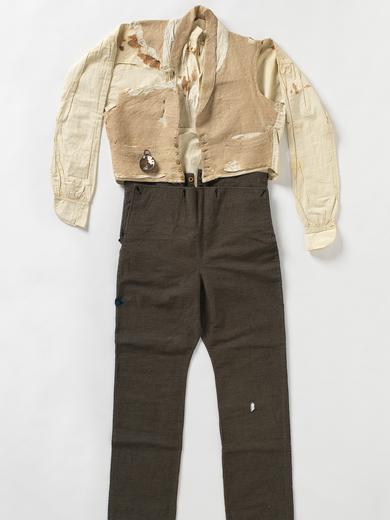 The clothing that Hyrum Smith was wearing in Carthage Jail when he was martyred include a homespun linen shirt, vest and wool trousers. When the mob stormed the jail, shots burst through the wooden panel of the door, about five feet or so above the floor.

Hyrum was on the other side the door, and a bullet struck him on the left side of his face, severing a large blood vessel; he bled to death almost immediately. This clothing, carefully preserved through the generations, provides valuable insight into the details of the death of Hyrum Smith.

Possibly the most recognized heirloom of the Hyrum Smith family is the lap desk that the Prophet Joseph borrowed from Hyrum in which he stored the golden plates, the Urim and Thummim, and the breastplate. Originally the chest belonged to Alvin, Joseph’s and Hyrum’s older brother, who died before the Prophet received the plates. (Alvin had carved his name on the edge of the chest before his death.) After he died, Hyrum inherited the piece. President Spencer W Kimball used it as a podium when he conducted the semiannual general conference from Fayette, New York, in celebration of the 150th anniversary of the organization of the Church. 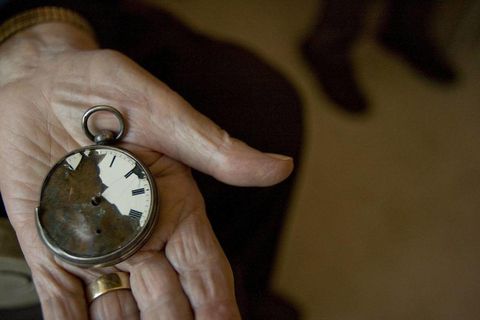 The Hyrum Smith family own two pocket watches that belonged to Hyrum Smith, both of which were handmade. One was manufactured in Liverpool, England; the other one was made in Dublin, Ireland. The one made in Dublin was in the right front pocket of the vest Hyrum was wearing in Carthage. The face of it was destroyed when a bullet passed through Hyrum’s body from the back and hit the watch. 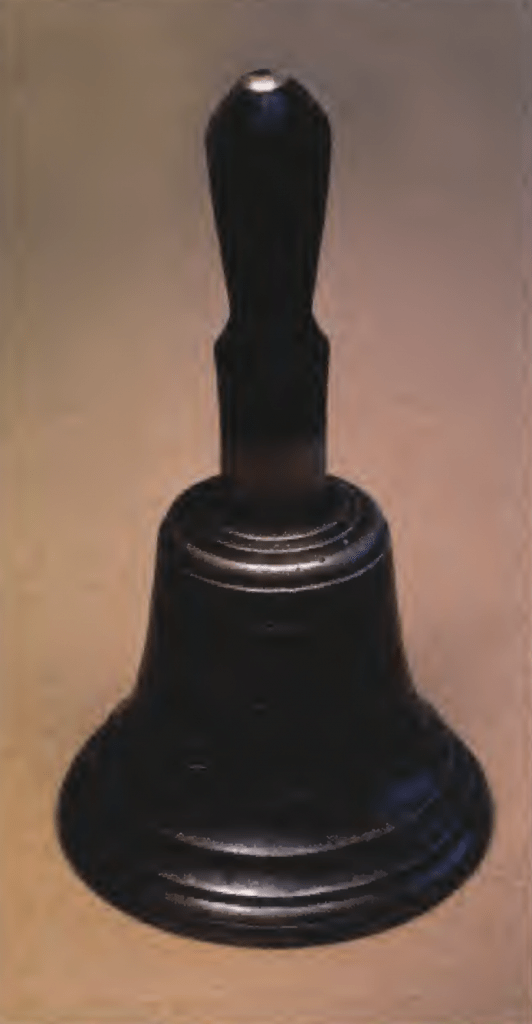 Lucy Mack Smith’s dinner bell was also used by Joseph Smith, Sr. as a school bell. The bell is cast bronze and has been turned on a lathe. It is about four inches across and is topped by a wooden handle.

Although certainly different from the sunglasses of today, Hyrum’s sunglasses were common to the time. 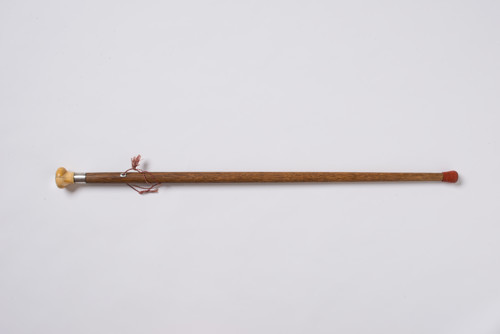 Hyrum’s walking cane, made of light colored, lightweight wood, has a golf-ball sized sphere on the handle, which fits nicely in the hand.

This beautifully handmade, round, wooden footstool belonged to Joseph’s mother, Lucy Mack Smith. In Lucy’s book, History of the Prophet by His Mother, Lucy is pictured sitting in her rocking chair with her foot on this stool. 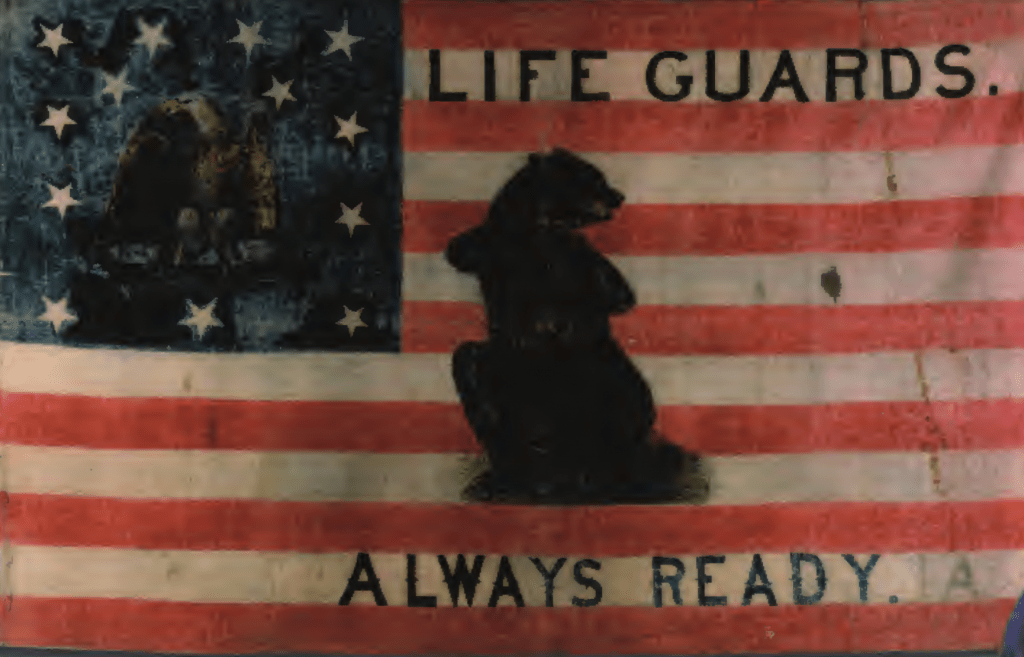 A huge, handmade American flag in the family’s possession is the flag given by Brigham Young to Mormon Battalion members as they left on their march to California. A photo of John Smith, Eldred’s great-grandfather, seated on a horse and carrying the flag in a flag cup attached to his belt, shows the flag so long and large that it is barely six inches off the ground. Made of white cloth, the red stripes and field of blue (which features 13 stars) are hand painted on, as is a spread eagle. The flag also features a large hand-painted bear, standing erect on its hind feet.

All of these priceless items have been carefully handed down and cared for, from one generation of Smiths to another, in much the same way the plates were passed on in Book of Mormon times. In those days, certain fathers gave their sons a sacred charge to keep, protect and preserve the sacred plates for others to profit from. Eldred has done just that with these irreplaceable heirlooms. He received the items from his fathers, passed down from the Smith family members who shaped and formed the Church in our dispensation, and he has handled these possessions literally with white gloves. Eldred’s face radiates with pride when he talks about these heirlooms, but the pride does not come simply from possessing these priceless pieces. His pride stems from what the items meant to the owners and what they mean to all of us now.

Today the story of his ancestor’s martyrdom lives on with Eldred Smith and others who have thought through this scene many times, analyzing every detail on the clothes and every detail in the written accounts that we have of the martyrdom. More than anyone I have heard before, Eldred pulls details from the written accounts to explain the story captured in the clothing. As Eldred explains and talks, the long hours of pondering on this event make the story come alive.

As he speaks, I can picture Hyrum clearly in my mind holding the door, being shot in the face, slumping, his legs curling up in front of his body as he falls back and lands on the floor. I picture him being hit again by bullets in the legs. I have never felt the story so alive around me, so touching, so powerful.

As I listen to the dramatic account, I realize the main power in this story came to Eldred not from simply being a descendant of Hyrum or from rereading the details over and over again. His power and insight comes from what he’s learned from the clothing, which adds to and enhances the written accounts of this pivotal moment in history.

Objects and heirlooms can often make written and oral histories more real and alive. While not all of us have toolboxes that held gold plates or clothes from martyred prophets to pass on, chances are we have some treasured artifacts that remind us of our great ancestors and what they lived and died for. If we learn to pass these objects on with sacredness and care, perhaps that will better help us pass on the sacred teachings that we have received from our ancestors as well.

Hopefully our heirlooms will help teach, much like Eldred Smith’s do, that priceless treasures can be common items and clothes, that the highest treasure is not here but in heaven and that no price is too great to pay for that treasure.