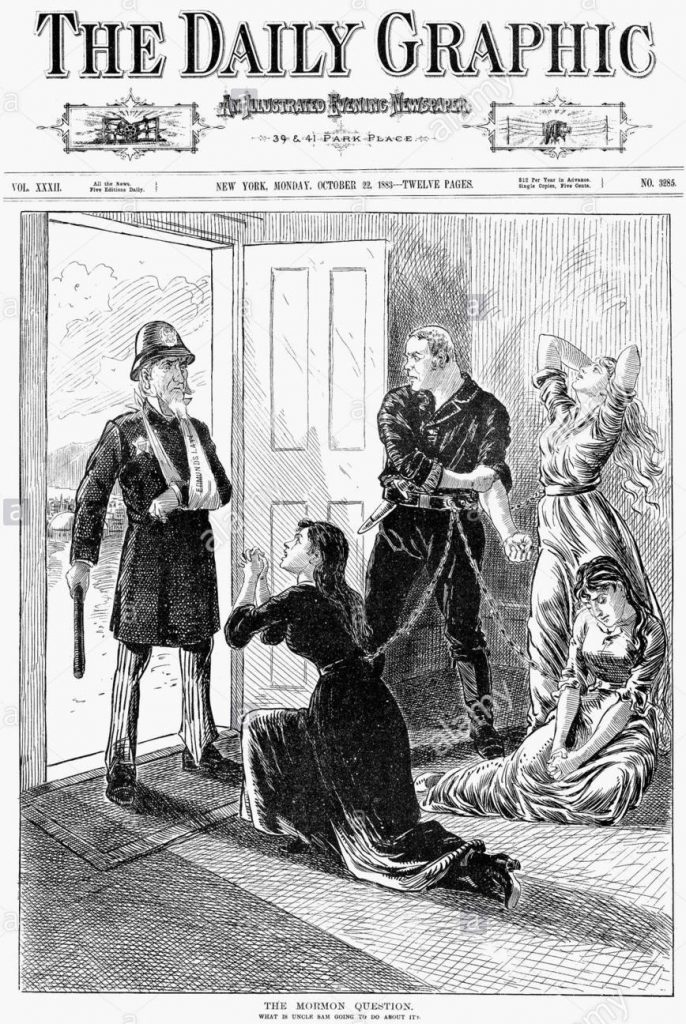 hunting COHABS, to use a vulgar parlance of the days when “the feds,” or federal officers went about chasing down “underground’ Mormon polygamists, was just about the most lucrative employment of the times. Twenty dollars per capita for each polygamist captured was the standard price paid to those mercenaries for “betraying” their friends and neighbors.

A prominent elder, dressed as an old lady, boarded a train for New York, with the intention of sailing for England. One of the “feds” getting wind of his intentions, but not of his disguise, hastened to the metropolis. Instead of arresting his man the officer had the pleasure of escorting a feeble old lady—the elder in disguise—on the steep walk up the plank leading to the ship.

A determined housewife in southern Utah, when an officer tried to search her house, grabbed the poker from the fireplace and jabbed and poked the retreating detective all the way to his horse and buggy.

And a precocious youngster in Salt Lake, asked on the street if he could point out a polygamist in the neighborhood, led the eager, sleuthing marshall into a chicken coop in the backyard, pointed out a big rooster and bade the officer arrest the feathered “cohab.”

A HARLOT ON THE BENCH: Some time before the arrival of Johnston’s Army in the Great Salt Lake Valley, to put down “the Mormon rebellion,” a man by the name of W. W. Drummond was sent to the territory as a federal judge. “Leaving his wife and family In Illinois without any means of support, he brought with him a harlot whom he had picked up in the streets of Washington, and introducing her as Mrs. Drummond, seated her by his side on the judicial bench.

Gambler and shyster, he openly avowed he had come to Utah to cash in on the ignorance of the Mormons.

A lady residing in Salt Lake City, a sister of the real Mrs. Drummond, hearing that the judges wife had arrived in the valley, promptly paid her a visit, and of course was astonished to find a different person in charge of the judge’s household.

Drummond openly insulted the community “by mocking the religion of the inhabitants, especially polygamy and by seating his mistress beside him on the bench,” wrote the historian Bancroft As a result of his scandalous antics the whole community turned against him and he was obliged to resign and forthwith unceremoniously, with his graceless companion, returned to his home by way of California.