Of the Danes who early joined the Church of Jesus Christ of Latter-day Saints, Andrew Jenson left the largest historical footprint. During a career that spanned 65 years he authored more than two-dozen books, edited four historical journals, and compiled thousands of pages of biographical sketches and local church histories. 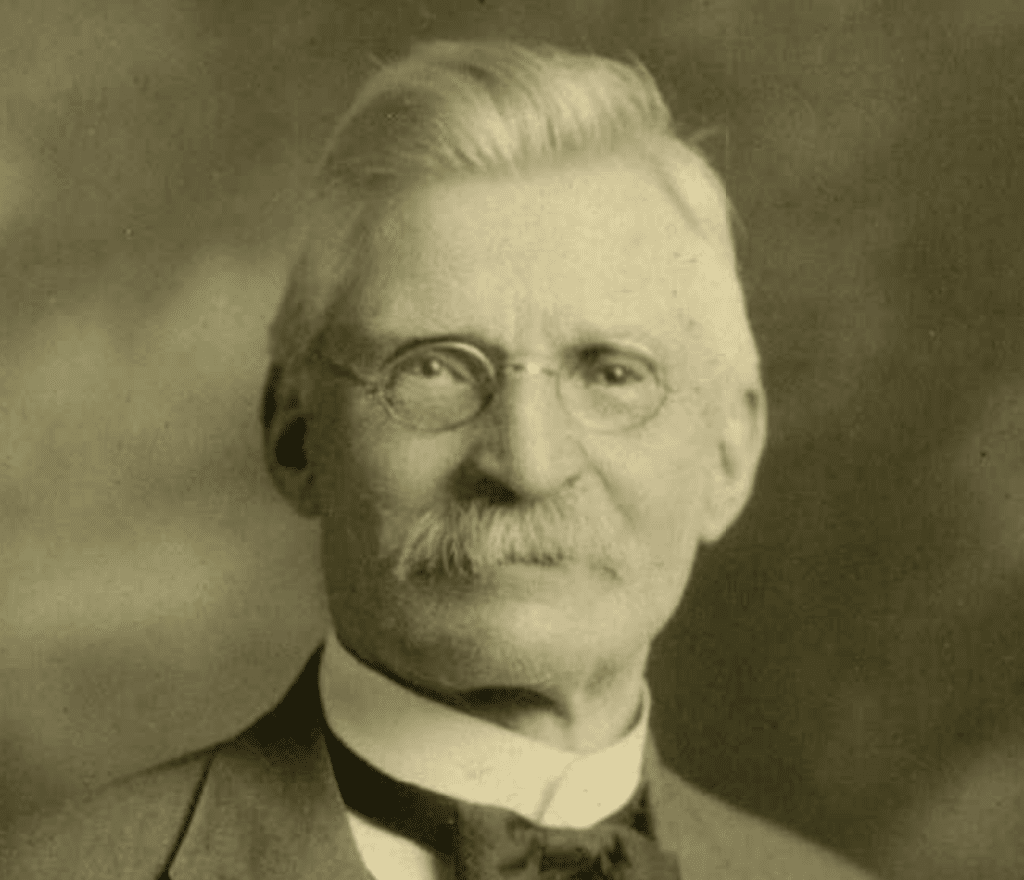 Andrew was born in Damgren, Torslev Parish, Hjorring amt, Jutland, denmark. His parents were Christen Jensen and Kirsten Andersen who were married on December 28, 1847. They had three sons: Jens born January 21, 1849, Andrew born on December 11, 1850, and Joseph Julius born January 9, 1862. In his Autobiography, Andrew candidly describes his family as coming from “…the poorer branch of the (Jensen) family as far as earthly possessions were concerned (p. 1).” Prior to marriage his mother worked as a maid and his father toiled as a farm laborer.

In 1850, during the last year of a rebellion against the crown of Denmark, Andrew’s father was drafted to build ramparts around the city of Fredericia. After the war Christen returned home to work on the farm Vestergaard where he severely sprained an ankle that left him crippled. (As a result of this injury his foot was eventually amputated in 1867, a year after his family arrived in Utah). Because he could no longer do manual labor, Christian travelled around the Danish countryside repairing clocks to support his family.

Four years after the first LDS missionaries arrived in Denmark Christen met Mormons who soon converted him and his family. After baptism in 1854 Christen was called on a local mission. In 1857 he presided over the Hormested Branch of the Vendsyssel Conference of the Church. Subsequently, he was made president of the Skjaeve Branch and shortly thereafter called on a mission to Laeso, an island located between Denmark and Sweden.

Initially, people turned a deaf ear to his preaching. To make contacts, Christen began by repairing clocks and casually slipping in discussions of his religion while doing repairs. Not wanting to run him out of their homes until their clocks were repaired, a number of clients were inadvertently exposed to his message, and a few invited him back to further discuss religious matters. Over the next several years Christian returned to Laeso a number of times and finally organized a small branch there with 12 members in 1859. He was the initial branch president and subsequently presided over other branches in Jerslev, Gjerum and Napstjert.

Because of his parents’ faith, Andrew was raised in a religious family. He was also lived in a country with free schools, compulsory education for children between the age of 7 and 14, and the option for home schooling. Because the schoolmaster in the nearest village was bitterly anti-Mormon, Andrew’s parents and LDS missionaries, for a time, were Andrew’s instructors. Their help, and a natural aptitude for learning, resulted in him becoming well educated for the time, and ultimately expressing himself exceedingly well in both Danish and English. He was a quick learner and an avid reader. Soon after leaving school Andrew was urged by missionaries to keep a journal, a prompting that led to a lifetime of journal writing and a passionate interest in history.

Because of his father’s physical handicap, Andrew began to work for pay by herding sheep when he was only 11. Soon after graduating from school, at the age of 14, Andrew says in his Autobiography that,

“Having no desire to hire out for a pitiful annual salary to farmers … (I) turned (my) attention to trading.”

Initially he sold tin wares and other small articles in rural areas. Later he made a significant amount of money selling German lithographs. Although only 15, he earned enough money by 1866 to help his family migrate to Utah. Except for his brother Jens who stayed behind to earn additional money, all of the family left for the United States on May 8, 1866. Their journey took them to Copenhagen, to Kiel, and then to Hamburg where they boarded the Kenilworth for the voyage to America on May 19th. Two other ships left Hamburg a few days later, the Humboldt and Cavour, also loaded with Scandinavian converts headed for Zion. A total of 1,213 Scandinavian converts left Hamburg on these three ships.

Unlike many of the ships going from Germany to America, the Kenilworth took the route north around Scotland and then headed west. The passage took nearly two month during which time 16 people died in Andrew’s group, seven couples were married, and two children were born. After landing in New York City, Andrew’s group went by steam ship to New Haven, Connecticut, and then by train to Montreal and on to St. Joseph, Missouri. After spending two hot and humid days on a steamboat, the group landed in Wyoming, Nebraska, the church’s staging place for immigrants to Utah.

The Jensens left Wyoming on August 8th in a wagon train captained by Andrew H. Scott. Their trek west involved experiences similar to those of tens of thousands of others who passed over this portion of the Oregon Trail. They were hungry part of the way, endured an early snowstorm at South Pass, and barely avoided the cholera that decimated groups that followed them. On October 7th they entered Salt Lake Valley.

Over the next 7 years Andrew lived the life of a footloose and fancy-free youth, sampling many of the occupations practiced by young men at the time. He herded sheep and cattle, dabbled in farming, help build three railroads, worked in construction, and sold lithographs and maps. He likewise was a miner, worked in a smelter, clerked in stores, was a commercial fisherman, and purchased a wagon and oxen to do freighting. Andrew experienced a young man’s dream by spending one summer helping to drive a large herd of cattle from Abilene, Kansas to northern Utah, suffering numerous stampedes in the doing. Along the way he perfected his English, saved money to help his brother come to Utah, purchased a few assets, and faithfully repaid his debt to the Perpetual Emigrating Fund.

Andrew’s life took a more serious turn when he was called on an LDS mission to Denmark in 1873. He spent a fruitful two years there, mostly in the Aalborg Conference. Soon after returning home he married his first wife, Kirsten Marie Pedersen, in Pleasant Grove on August 30, 1875.

Andrew started his writing and historical career by translating a book on the life of Joseph Smith Jr. into Danish. He also helped edit a Danish newspaper that was published for a time in Salt Lake City.

Only four years after returning from his first mission, he was called to a second Danish mission in 1879. In addition to being president of the Copenhagen branch, Andrew also studied advanced Danish grammar, translated numerous church publications into Danish, including the Book of Mormon. When the mission president died suddenly, Andrew was the acting president of the Danish Mission for six months. After a highly productive two years in Denmark he returned to Pleasant Grove in late 1881.

Soon after returning home he relocated his family to Salt Lake City to pursue his printing and publishing interests. His new and final home was located at what is now 154 North and 2nd West. Over the next few years Andrew became involved in newspapers, writing historical papers for sale, and doing research in the Church Historical Office.

Over the next fifty years Andrew worked relentless collecting historical information. In 1886 he became a part-time employee of the Church’s Historical Office and in 1897 received an appointment as Assistant Church Historian. If he had developed more diplomatic skills he might have been named the head historian. His work involved extensive travel around the Inter-mountain west, numerous trips within the United States, crossing the Atlantic Ocean 13 times and crossing the Pacific Ocean four times, and circling the globe twice.

On a personal level, Andrew was a fervent supporter of his church, as was his father, and both entered plural marriage. Andrew’s two brothers, Jens and Joseph, however, opposed polygamy. Jens and Joseph became members of the Reorganized Church, and for a time Jens was the leader of the Josephites in Pleasant Grove where his mother lived. Joseph lived in Richfield, as did his father with his second wife. Despite this religious schism, Andrew maintained a close relationship with his brothers and succeeded in re-baptizing Joseph and his family late in life.

Until he died in 1941 Andrew lived a vigorous and full life. He was a passionate walker, had an excellent memory, traveled continually, assembled a major library, and bragged of hiking to the top of Mount Timpanogos at the age of 76. Late in life he relished arriving in church meetings, unannounced, and striding to the podium to present greetings from the general authorities. His primary legacy is a trove of historical materials that are now primary documents used by modern LDS historians.