Charles S. Peterson is buried in Mesa, Arizona alongside his third wife Ann Patten Peterson, both showing Faith in Every Footstep markers. Nearby is the grave of his fifth wife, Mary Martha Thompson Peterson, who bore him 11 children and lived 50 years past his death to age 90. His third wife, Ann, had raised her own 13 children, along with three of four children from the first wife, Ann Bunting Dennis, who died in Nauvoo. Also, one of three that survived childhood from his second wife, Mary Ann Patten. Add to that my own great grandmother, Fannie Busby Peterson, who was born to the fourth wife, Margaret Crispin Peterson.

My own great, great grandmother, Margaret Busby Crispin Peterson, wasn’t a Utah pioneer. Technically, those who immigrated to Utah prior to the driving of the Golden Spike in 1869 were pioneers but those who came thereafter were not. “Maggie” came by train from New Jersey in 1870.
Charles and his sons had worked with his son-in-law, Roswell Stevens, Jr. and others to build the road from South Ogden through Weber Canyon to Wyoming. The train tracks from the east coast to the west coast followed that road through the mountains. In 1869-1870 Charles had taken the train to visit his mother and siblings in Mt. Holly, New Jersey. There he met Maggie, who had been working as a maid for his mother, Martha Murdock Peterson. After he baptized Maggie, in New Jersey in January, 1870, he brought her to Utah. In August, 1870 he married her in the Endowment House. She was his fourth wife.

A side story is that Maggie was known by Morgan county locals as the woman who brought smallpox to the valley, having been exposed to the disease while riding the train. My wife’s ancestor, John Toone of Croydon, Utah was known as the man who experimented with penicillin and saved the lives of many who were exposed to the pox.

My great, great grandfather, Charles Sreeve “Shreeve” Peterson, had been raised near Sreeveville in Mt. Holly, New Jersey. He had married at age 19 to a local girl and they gave birth to three children before joining the Church of Jesus Christ of Latter-day Saints in 1843. Their fourth child, Edward, was born 1843 in Nauvoo, after which Ann died the following year, in 1844. Edward then died, also in Nauvoo, October 1845. Charles served in the Nauvoo Legion prior to the time that Joseph and Hyrum were martyred.

After Ann’s death, according to Charles’ autobiography, Brigham Young told Charles to “go hunt another wife.” He did so and in the Nauvoo Temple he married Mary Ann Patten in 1845. She bore him a son that they named Charles Peterson but in July of 1847, in Iowa they buried their son. In 1847 while living in Pottawattamie, Iowa she bore him a daughter, named Ann. In 1849, still in Iowa, she bore another daughter, Martha. Another son, Alma Patten Peterson, was born in Andrew, Missouri in 1850.

Mary Ann left the marriage soon after Charles had married Mary Ann’s half-sister (same father but different mothers), Ann Patten in January, 1849 in Kanesville, Iowa. That same year he emigrated to Utah, leaving the United States. He had given his wagon to help the first group of saints but stayed to help build wagons and other blacksmith duties at Winter Quarters until 1849.

His first Church assignment in Utah was to be the first presiding Elder in Mountainville, which became Alpine, Utah. His residence is seen in the map of the wordsworth fort, in the left corner, next to the church/school building. 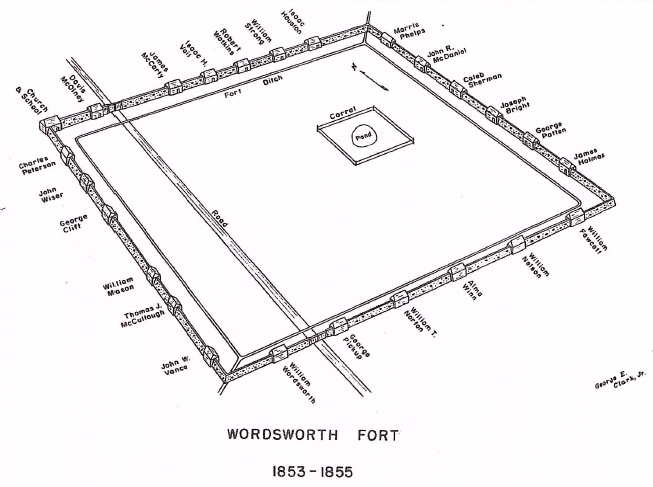 After two years the fort was abandoned and Charles Peterson was called to settle weber valley, which became Morgan county, east of Ogden. Besides farming and road building he was the blacksmith, postmaster and became the judge of Weber City, which became Peterson, Utah, named after its founder. He was the first Bishop when the ward was formed.

Less than two years after his marriage to Maggie, Charles brought 22-year-old English convert, Mary Martha Thompson, into the family when he was 56. She was his fifth wife and gave him ten additional children. She was supported by her children for 50 years after her husband’s death. He died in Mesa, Arizona at age 71 when she was only 40.

That fifth wife may have been the straw that broke Maggie’s back. She moved into Ogden to become “the city woman” and was denied access to her own daughter, Fannie, who was raised by the third wife. At age 34 Maggie married Charles Hall Jenkins who had children from a previous marriage to Sarah Ann William Hart from Wales. He died a horrible and tragic death in the Ogden railyard. He was collecting nails in the railyard and dodged one train only to be mangled by a train on parallel tracks coming the opposite direction. He was 50 years old. Seven years later Maggie was running a boarding house for rail workers when she died on her own front porch from apoplexy (stroke) at age 47.

In case you’re wondering how this Peterson Patriarch came to die in Mesa, the story is that one of his sons from the first marriage became the first Sheriff in Mesa. He wrote to his father, who was feeling arthritic, how hot and dry the weather was near Phoenix. The rest is family history, since my own maternal grandfather was born and buried in Mesa, near his pioneer ancestors.