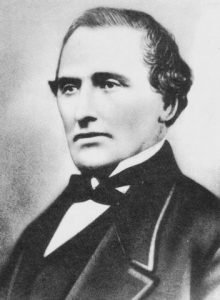 Because of his prominence, much has been written about Peter Maughan, the great pioneer colonizer of Cache Valley. This account will serve only as a vignette, summarizing his life. John was the progenitor of the Mormon Maughans, and was my own great great-grandfather on my mother’s side of the family. Born in the little village of Milton in Cumberland County, Northern England on 7 May 1811, Peter grew to manhood in humble circumstances. From the age of fifteen, he worked in the lead mines.

Peter was married at age twenty to Ruth Harrison, age nineteen, on 1 October 1831. Almost immediately they were the parents of several children. They lived faithfully together and were baptized into the LDS Church. Peter was soon recognized as one of the Lord’s favored disciples and served in important callings all his days.

Ruth’s time on earth was cut short by her death just after the birth of her sixth child, baby Ruth, on 26 March 1841. She went to her grave while making plans to emigrate to America with her husband and family. Brigham Young advised Peter to go forward with these plans, and the motherless family together launched out across the deep in company with Brigham Young, Heber C. Kimball and five other apostles returning from their famous mission to Britain. The little baby Ruth died from malnourishment and was buried at sea off the coast of Newfoundland.

In Nauvoo, Peter met and married a young widow, Mary Ann Weston Davis, who became a wonderful mother to his five surviving children. She bore eight more of her own, all of whom were given the middle name of Weston. Peter later married Elizabeth Preator, who bore three children. This brought the total number of Peter’s children to seventeen. Many of these had large families of their own, and the posterity of Peter Maughan has grown to very large numbers, most of whom have faithfully retained their blessings in the Lord’s Church.

Peter worked on the Nauvoo temple, where he and Mary Ann were endowed on 2 February 1846. Peter joined the nauvoo legion. He purchased a lot, built a home and stayed in Nauvoo until the spring of 1844, just before the martyrdom of JosephSmith. The Prophet sent him north to Rock Island to mine coal. A year later, the coal enterprise was closed and the family returned to Nauvoo to prepare to flee west with the Saints. But sickness in the family intervened and they were unable to get ready in time. Instead, they went north to Wisconsin to mine lead — a skill Peter was expert at. Peter said the Lord showed him where to mine, and during the following four years, until April 1850, the family provided for themselves and obtained the necessary outfit and supplies for their journey west.

In Utah, the family was first assigned to Tooele, where Peter became the county clerk and assessor, then Recorder for Tooele City, then county treasurer and finally a member of the Territorial Legislature. He also was called to preside over the Church in E. T. City, near Tooele. Poor soil, crickets, diseases in their crops and hostile Indians made this a difficult pioneering enterprise. A lesser man than Peter and a lesser woman than Mary Ann might have given up. But they overcame all difficulties and prepared themselves for their next assignment. This came early in 1856, when Brigham Young asked Peter to head a company of pioneers in settling Cache Valley.

In September, the settlers camped on a stream in the south end of the Cache Valley and decided to make this their home, and to call it “Maughan’s Fort.” The severe winter and the invasion of Johnston’s Army in 1857 caused a temporary evacuation. In 1859, the settlers had returned and the little city became Wellsville. Soon many families began flocking to the lovely valley. Logan, Providence, Mendon, Smithfield and Richmond were soon established. Peter Maughan was named Probate Judge for Cache County, which office at that time was the chief executive. Hewas also called by the Church as “Presiding Bishop,” a calling similar to that of later stake presidents. He and Apostle Ezra T. Benson, who had also moved to Logan, worked in close harmony with each other. Peter and his family were asked to move to Logan in 1860, where he could better work with bishops in the whole area, and with other Church and civic officers. By the time they moved into their new three-room log house, Mary Ann was ready to deliver her eighth and last child.

A lifetime of service cannot be told here. Peter Maughan became a giant among the leaders of the new Utah Territory, respected and relied upon by Brigham Young and other leaders, as well as by the people he served. He learned to deal with the Indians so successfully that peace prevailed throughout most his lifetime. When Peter died on 24 April 1871, the Logan Tabernacle was filled with friends and admirers, including many Indians. It is interesting to read the order of march for the procession to the cemetery: Brass and Martial Bands, Company of Cavalry, The Hearse, Family and Relatives of the deceased, Bishops and Priesthood, Citizens in Carriages and (at the last) a company of Shoshone Indians.

The sons and daughters of Peter Maughan and his three wives became the forebears of a noble posterity. Their names are held in honorable remembrance by all who knew of them, most of all by those who claim them as grandparents.