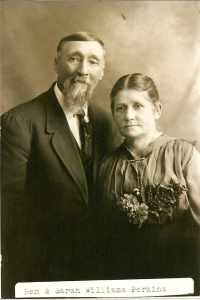 Born January 14, 1844, in Shoot, Glamorganshire, south wales to William and Jane Mathews Perkins, Benjamin came from a poor family that depended on the coal mines for their income. From the age of six, he worked in the mines, starting out as a water boy. At the time of his immigration to Utah in 1867, he had been well trained in the use of blasting powder as a means of removing the coal from the mine walls.

After coming to the States, he worked to earn money to send for the rest of his family and his sweetheart, Mary Ann Williams. They arrived in 1867, and he was sealed to Mary Ann in the endowment house shortly afterwards. Her family came over in 1878 due to the failing health of her father, and they were joyously reunited.

When the call came for the Saints to leave their comfortable homes and colonize the southeast corner of the state of Utah, Benjamin and Mary Ann were living in Cedar City and were amongst the first to be given the assignment to “volunteer.” They had three young children at this time, and Mary Ann asked her sister, Sarah, to come along and help.

The road had not yet been created for much of their journey, and Ben’s experience with blasting powder came in handy as the Saints cleared way for their wagons to pass. His knowledge came into greatest play, however, when they reached the cliff that overlooked the Colorado River. In a classic case of “they can’t go around it and they can’t go under it,” the Saints decided they would have to go down it.

A notch already existed in the face of the cliff, and it was determined they would widen the notch and lower the wagons that way. However, one section was so steep there was no way a wagon could possibly roll down. It’s unknown exactly how Benjamin came up with the idea that would eventually work. One assumes the answer came as a result of prayer and meditation. It’s doubtless his time spent in the coal mines of Wales prepared him for this work, for the methods he employed were exactly those he’d used in coal mining.

He suggested that a series of holes be bored and blasted out of the cliff face and that oak staves be inserted into those holes to form a road that would hang in midair. If the holes were too close together, they could break into each other and the staves would fall out. If the holes were too far apart, the wheels would become stuck in the grooves and the road wouldn’t work. Unschooled and unlettered, Benjamin did the math in his head and determined the spacing of the holes, the size of the auger needed, and he trained the men in how to use the blasting powder to create the holes. Once the road was finished, it was dubbed “Uncle Ben’s Dugway” in his honor.

This bio originally appeared in pioneer Magazine, 2010 Vol.57 No.3