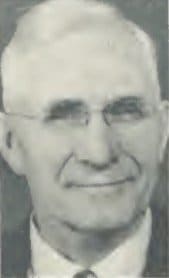 John H. Pendleton, 85, died Sept. 28, 1970 in the Valley View Medical Center in Cedar City, Utah of natural causes. He was the first president of the Little Salt Lake Chapter, Sons of the Utah Pioneers and was chapter historian at the time of his death. He has always been active in promoting pioneer activities and in the preservation of the pioneer heritage.

A retired educator and instructor in the industrial arts, he served 40 years in Utah high schools, particularly in Parowan High and Branch Agricultural College in Cedar City. He attended Murdock Academy in Beaver, Utah, and received his B.A. from Utah State University and his M.A. from Iowa State.

Always active in church work, he was counselor in the bishopric of the Second Ward of Parowan and was a high priest in that ward. He served as city councilman and chairman of the City Planning Board. Mr. Pendleton was one of the organizers of the Southern Utah Dairy Company and president of the board of directors for many years. He was also active in the Parowan Exchange Club.